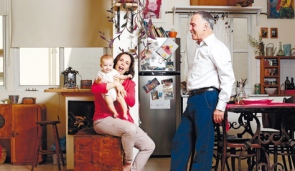 Joel was born in 1938 in Moshav Kfar Sirkin, to parents from Germany who founded the cooperative village. Others born that year: King Juan Carlos of Spain, Michael Bar-Zohar, Enrico Macias. Daphna was born in 1972 in Ramat Gan, the same year as Dana International, Jude Law and Zinedine Zidane.

Joel's wife, Nurit, 67, is a psychotherapist. Daphna, whom her father calls Daffy, has three brothers: Dor, 46, is a lawyer who manages his father's law firm of Joel Levi & Co.; Yishai, 41, works as an antivirus specialist in high tech; and Ido, 37, is a yoga instructor. Daphna's family includes Aviv, four and a half months old.

How often they meet:

Every day since Aviv was born. "Until Aviv was born I used to go straight to the office after my swim and was always the first one there. Now I visit Aviv, my eighth grandchild, every morning. The fact that Daffy is a single mother allows me to come both in the morning and the evening, and I am always welcomed warmly. With my sons, I had to ask permission from the daughters-in-law, and that is more complicated."

Joel was industrious, liked to learn and got correspondingly high grades; Daphna was the opposite ("I was the black sheep, with the poor marks" ). Her one escape was painting. On her first day in first grade she told her parents it wasn't for her. In the 10th grade she was absent more days than she was present. And her parents? "I had a teacher who only wanted things to be organized. Every month he gave me a note with the dates on which I had been absent and Dad would sign: 'Daphna was absent with my permission.'"

Probably only people with a rigid yekke upbringing can understand the swing of the intergenerational pendulum and allow his children to dabble in whatever they fancy and feel totally free. "I never refused my children anything," Joel says. "My parents insisted that I finish everything on the plate. Even if the soup was too salty to eat, I cried and ate it. My wife and I thought it would be enough for us to act as a personal example for them. We did it with due deliberation, hoping that they would not stray from the path, and we succeeded. They could run around until 3 in the morning without us asking questions. We knew we could trust them."

The opposite of Dad:

And again the pendulum swings in the opposite direction: "I will very much try to set limits for Aviv," Daphna says. "I got lost and then worked very hard to create limits for myself." Besides only going to school when she felt like it, Daphna did not brush her teeth. Why? Just like that. "It was only before going into the army, when I realized how many cavities I had, that I started brushing."

Joel attended a school of the Labor Movement stream in Petah Tikva, studied law at the Hebrew University of Jerusalem and clerked for Gabriel Bach, later a Supreme Court justice. Daphna studied at the Givatayim branch of the ORT vocational schools network, majoring in applied art. Later she studied at the art academy in Florence and studied curating at Tel Aviv University.

During her military service Daphna served as a graphic artist at the headquarters of the chief communication officer. At one point she was accused of selling army property: She had drawn a greeting card on some cardboard that was in the office and sold it to another soldier for NIS 5. In response, she copied to a disc all the private work her commanding officers did at the army's expense. "The commanders started to be afraid of me and threatened me," she says. "I was in a shocking state of mind. I told Dad. With one phone call, he got me out of there."

Joel was an exemplary soldier. He was an instructor in the Youth Battalions and afterward, as a civilian employee of the army, served in the censorship unit. He chose the four journalists who were present at Eichmann's execution.

In 1964, Joel started a law firm in Ramat Gan which specialized in criminal cases and work accidents. Since 1990, he has dealt almost exclusively with the restoration of Nazi-looted art to its rightful owners. "In 1998, representatives from 44 countries met in Washington to discuss plundered works of art, and that became my field of expertise. I represent seven German families who had vast collections (38,000 works ). The idea is to trace a picture's provenance, which also involves detective work."

How does it work? "People from Germany call me and offer to return pictures. Among them are museum directors, such as the person in charge of returning the pictures that Hitler stole for his museum in Linz. He found a picture that had belonged to Alfred Sommerguth, whose heirs are clients of mine, and wanted to return it."

After her army service, Daphna looked for a place that would be hers alone, and chose Florence. She had previously studied at the Italian Institute in Tel Aviv and even managed to read Natalia Ginzburg's "Family Sayings" in the original Italian. She was accepted to the art academy and remained in the city for 10 years.

Daphna had no one to rebel against. All doors were open. It was not until she was 22 that she realized it was a trap, and left home. "As a girl, I pitied my friends. I saw how parents doled out punishments and restricted them, and I couldn't understand why. My brothers and I had our own sub-state and did whatever we wanted in it. My big brother was the responsible and dominant adult, and it was him I was afraid of, not my parents."

"In Florence I was in a type of pleasurable floating; I needed to be remote from the family in order to develop artistically and define myself as a separate personality." She waitressed in a family restaurant and exhibited her art works there. "I sold a great many works. In Florence, people go to restaurants more than to galleries. I taught drawing at two private schools and in the Jewish community I taught Hebrew through art and creative activities."

Joel found it hard to understand why Daphna asked for a month off from visits and phone calls during her stay in Florence. He called it disengagement, and "it was hard to swallow." Daphna gets uptight over her father's stubbornness about what she calls unimportant matters like this, and about his driving. "I think he shouldn't drive at all."

The separation and distancing drew them closer. For Joel, Florence was also a source of inspiration to study and understand art. "Since then there has been mutual inspiration between us. In a library Daffy found the picture of a work I had been looking for, which belonged to one of my clients, and that enabled me to prove the provenance of the picture." Daphna is helping her father write the stories of these fascinating works of art. The book is on the way.

There was imbalance, in that Joel missed Daphna very much, but Daphna enjoyed the quiet and her independence and didn't miss anything, including her parents.

Daphna returned to Israel six years ago and hasn't done any painting since. "Painting was a haven for me, in which I organized my life. Big paintings swallowed me into them. It was a safe place and under my control. That is where I found the balance. In Israel I was suddenly able to be outside painting."

Painting with the most amazing story:

"One day, Goebbels went to Hitler and told him that instead of burning degenerate art, they could make money from it. In 1938, advertisements appeared across Europe: 'Modern art for sale.' One German bought 13 pictures. He moved to Switzerland and his daughter inherited one picture from him. One day, the daughter came to a London art dealer in order to sell the picture. He told her it was listed as stolen, which is how I entered the picture. She received 20 percent of the picture's worth and my client received 80 percent. In 2007, I started to get letters from a German man whose surname was identical to that of the other German, but when I asked him if they were related, he disappeared. It's possible that he too has stolen paintings in his possession."

The first conversation with her parents was not a success. "They were shocked when I told them about the idea. Dad told me, 'Get pregnant from someone and not from the sperm bank.' After I explained the advantages, I got full support. My pregnancy drew us very close together. In all my life I was never so calm and so much in harmony with myself." Joel still is not fully reconciled. "I am concerned about what she will tell Aviv when she asks who her father is. What will she say - 'a sperm donation'?"

"I am very disappointed she is not painting now."

Joel regrets that he was more of a friend and less of a father. "Because of the frankness and the relations of friendship, I lost the ability to act as an authority and role model for her." Daphna regrets storing up anger until she exploded. "If I had learned how to give expression to what was bothering me, it would have helped me as a girl."

Joel: "Yes, only with her of all my children."

What they would rather not know about each other:

Daphna: "I prefer to spare him my difficulties." Joel doesn't think there is anything she doesn't know about him.

Something you never told him:

"We had talks in the past few years and I think I told him everything I had to say, even at the price of causing pain. That allows us to feel liberated today and he can listen and change his opinions, even though he is stubborn."

Daphna had two. The one about the prince on the white horse and a happy family was never realized, but she did fulfill the second fantasy: "I wanted to be a painter so I wouldn't have to go to work every day." Joel also had a fantasy that was not actualized: "That I would be able to unify Hebrew law as customary law in Israel, but I became convinced that it's impossible."