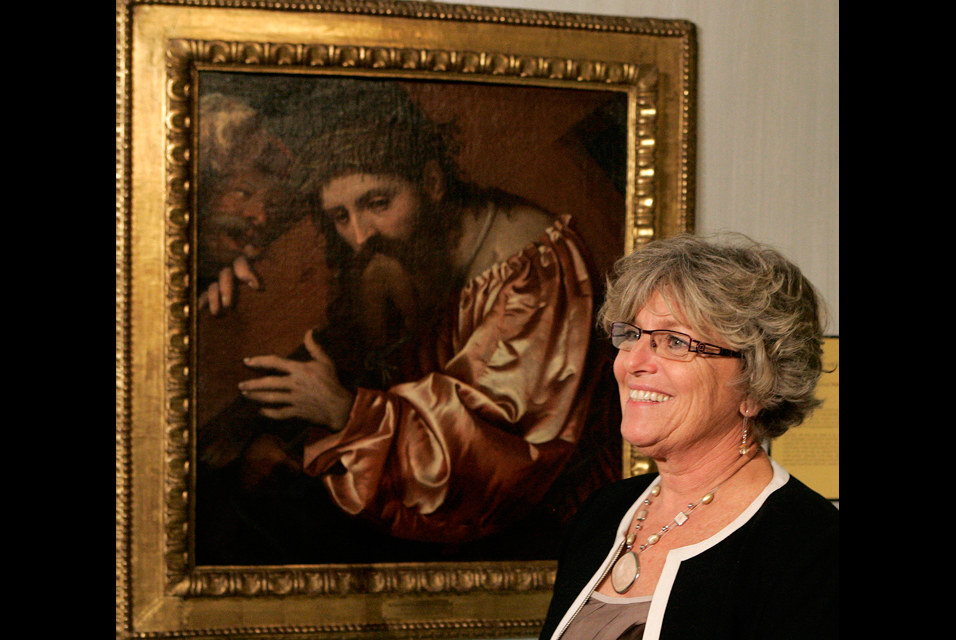 Chucha Barber, Chief Financial Officer of the of the Mary Brogan Museum, discusses the status of the painting "Christ Carrying the Cross Dragged by Rogue" by Italian Renaissance artist Girolamo Romano on Thursday September 8, 2011, in Tallahassee, Fla. U.S. authorities have ordered a Tallahassee museum to hold onto a nearly 500-year-old Italian painting of Christ carrying the Cross because it is believed to have been stolen by the Nazis from a Jewish family during World War II. The painting will now stay in the museum until at least November as the United States and Italy try to resolve questions about the painting's ownership. AP Photo/Steve Cannon.

TALLAHASSEE (AP).- A Florida museum said it has been ordered to temporarily hang onto a borrowed 16th Century Italian painting of Christ holding the cross, as U.S. and Italian authorities seek to resolve questions of ownership amid claims the work had been stolen from a Jewish family in World War II.

The Baroque painting was one of 50 works lent by a famous Milan museum to the Mary Brogan Museum of Art & Science in Tallahassee. The work was part of a display in the museum from March until earlier this month.

The museum's chief executive officer Chucha Barber said she was instructed by the U.S. Attorney's office in July to retain the painting until the ownership issues were resolved.

"My initial reaction was that this was an important opportunity for the Brogan museum to do the right thing and help the government determine the rightful ownership," Barber said.

On Thursday, the museum put back on display the painting, "Christ Carrying the Cross Dragged by a Rogue" by Girolamo Romano. The Tallahassee Democrat (http://bit.ly/p092sL) first reported that federal authorities had ordered the painting to remain in the United States while matters are settled.

The painting was part of a $30 million exhibition of Baroque paintings from the Pinacoteca di Brera museum in Milan. The painting is believed to date to around 1538 and it was purchased by Gentili di Giuseppe in 1914 during an auction in Paris. Di Giuseppe, who worked for the Italian government, died in 1940 shortly after the Nazis occupied France.

The painting is believed to been among 155 works auctioned off by the French Vichy government in 1941 to pay off debts. But members of his Jewish family who fled the country because of the Nazi occupation have said the sale was illegal.

Barber said that U.S. Attorney Pamela Marsh personally called her and informed her about the possible problems surrounding the painting. Marsh did not respond to a request for comment Thursday.

There was no immediate response from the Milan museum to an email sent Thursday by The Associated Press seeking comment. A telephone message left with the Italian consulate in Miami was not immediately returned.

Barber said since July there have been a series of conversations between authorities and the two museums that resulted in a decision to keep the painting in the United States until at least November.

Back in 2000, two American museums reached settlements with the heirs of Di Giuseppe that allowed those museums to keep two pieces of artwork that were in their collections. A French court in 1999 returned five paintings to the family from the Louvre museum in Paris.

In 2008, the American Association of Museums released guidelines for museums to follow to avoid acquiring artifacts that may have been illegally exported. Museums including the Metropolitan Museum of Art in New York and the J. Paul Getty Museum in Los Angeles have agreed in recent years to return artifacts to Italy that the Italian government says were looted or stolen.