More on the Monet rejected by the Wildenstein Institute

Following the BBC's investigation into the authenticity of a Claude Monet painting owned by British collector David Joel (which I reported here), more evidence has emerged which endorses the growing consensus that the Wildenstein Institute can no longer be trusted to fulfill its role as the exclusive and official authenticator of Monet's paintings.

succeeded in establishing a watertight provenance and an unequivocal attribution for Mr Joel's Monet landscape — Les bords de la Seine à Argentueil (shown above left). The producers of the programme deftly disguised the fact that most of the research leads had been provided by David Joel himself, but I'll come back to that later.

Although the documentary was made last year, it has only just been broadcast. However, shortly after it was completed, the renowned art historian and Impressionist scholar John House, who had contributed to the programme, retired from his long-held post at London's Courtauld Institute of Art. While clearing out his office, Professor House stumbled upon a forgotten Monet obituary dated 1926 from Le Figaro Artistique. The obituary was illustrated with seven of Monet's paintings, including the landscape Les bords de la Seine à Argentueil owned by David Joel. 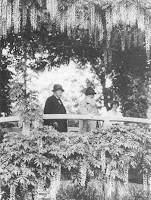 One of Monet's closest friends was the former French Prime Minister Georges Clémenceau (1841-1929), who was present at the artist's death in December 1926, holding his hand and offering reassurance. The image (right) shows the two men on the bridge in Monet's garden at Giverny.

Indeed it was Clémenceau who persuaded Monet to dedicate his epic water lilies project to the French state to celebrate the Armistice of November 1918. As a result, two of the largest water lily paintings are now housed in the Musée de l'Orangerie

First of all, it is inconceivable that Clémenceau, who had an intimate knowledge of Monet's work, would not have noticed if one of the illustrated paintings in the obituary was a fake. Had that painting been 'wrong' in any way shape or form, it could not have found its way into an authoritative obituary in Le Figaro Artistique without Monet's closest friends and associates noticing and drawing attention to it.

Furthermore, if the Wildenstein Institute is the panoptic and all-encompassing archive it purports to be, then a copy of the Le Figaro Artistique obituary would surely be included in its Monet files.

Why, then, did Daniel Wildenstein consistently reject the painting as not an autograph work by Monet? One explanation is that by dismissing it, the Wildensteins hoped the painting would then find its way onto the market as a lowly copy or rejected work, at which point they would be able to acquire it themselves at a knock-down price, "do the research" on it and conveniently change their mind. Such practices are by no means unusual in the art world.

Knowing that the late Daniel Wildenstein had consistently rejected the picture, Guy Wildenstein could not go back on his father's word for fear of undermining the family's fabled authority in such matters. It is also highly likely that Daniel Wildenstein never actually saw the painting in the flesh.

The picture's original owner, the Francophile Egyptian collector Mohamed Mahmoud Khalil Bek (1877-1953) (right), acquired it from the Galerie Georges Petit in Paris (the painting still bears Petit's serrated stock label) and promptly took it back to Cairo where it entered his growing collection of French modernist masterpieces.

When Nasser overthrew the Egyptian monarchy and seized power in 1952, Kahlil fled to Paris. Shortly after arriving, he died of a heart attack, leaving his wife, the French-born Emiline Hector Luce, in straitened financial circumstances. She immediately looked to liquidate her few assets, one of which was the Monet that her husband had brought with him on fleeing Cairo (it had always been one of his favourite paintings). Madame Luce sold the picture to the Galerie André Maurice in Paris, who shortly afterwards sold it to Dudley Tooth during one of the London dealer's frequent buying sprees in the French capital. Tooth brought it back to London, had it restored, and sold it to the concert pianist Sir Clifford Curzon. Thus there were few opportunities for Daniel Wildenstein to have seen the painting.

The Fake or Fortune documentary presented David Joel as a naif who had stumbled upon a masterpiece and needed some expert guidance. In fact, Mr Joel has written a book on Monet at Véthueil, as well as a catalogue raisonné of British 18th-century marine painter Charles Brooking. But for some reason the BBC didn't want us to know this, doubtless because it would have deflected the spurious glow of expertise away from their two star presenters.

As a result, throughout the documentary Mr Joel was shown dutifully traipsing around after Fiona Bruce and London art-sleuth Philip Mould, as they dashed from Lymington to London to Paris to Cairo in an attempt to piece together the provenance of the picture.

The BBC excels at this kind of dissembling, which is designed to show its presenters as heroic sophisticates and everyone else as provincial dimwits. While the producers were careful to ensure that Ms Bruce got a chance to show off her university French, it omitted to mention David Joel's art history credentials or the fact that he has been corresponding for many years with Monet's descendants.

Will David Joel's Monet ever be recognised as the real thing? Not while the Wildenstein Institute are guarding the lily pond.

In the light of the new evidence that has emerged, the BBC should revisit this issue and put a little more effort into exposing the compromised Wildenstein Institute.