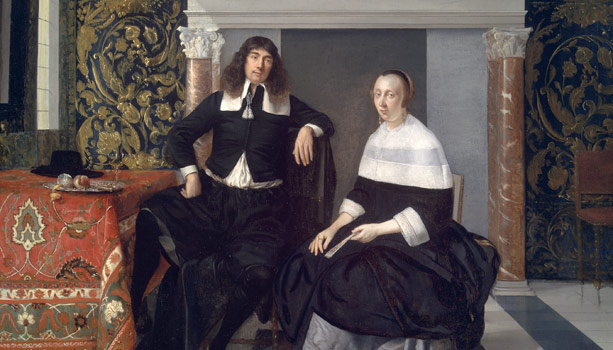 "Portrait of a Man and Woman in an Interior," circa 1666, Eglon van der Neer (1634–1703)
From Vienna's Leopold Museum having to sell art to pay off a restitution claim related to Egon Schiele's "Portrait of Wally" to MoMA being sued by the heirs of George Grosz over a disputed painting, the headlines in recent years have been filled with news of the headaches caused for museums by learning that they house works of art stolen by the Nazis. At least one institution is taking a proactive, rather than reactive, approach to this issue. Boston's Museum of Fine Arts actually has a full-time "curator for provenance," Victoria S. Reed, the first person to hold such a post in the United States. And it's more than just a symbolic title: The institution has voluntarily decided to compensate the heirs of a Jewish art dealer for a 17th-century Dutch portrait by Eglon van der Neer in its collection that is supposedly Nazi loot.

The issue came to light when the museum began investigating works in the collection with murky histories. Back in 2000, the MFA posted images of seven works with questionable provenance — including the van der Neer painting — online, according to the Boston Globe. Subsequently, in 2004, Fred Westfield, the 84-year-old nephew of art dealer Walter Westfeld, came upon the image of the painting after doing an online search and got in touch with the museum. After researching the history of the painting and the dealer, the MFA agreed to pay Westfield an undisclosed sum in order to keep the painting in its collection.

"We feel very good and thankful for how the museum dealt with us," Westfield told the Boston Globe. "We had a lot of help from some of the people at the museum over the years, once we started to claim that the painting really did belong to us."

The portrait of a wealthy Dutch couple in their living room was purchased from New York's E. and A. Silberman Galleries in 1941 for $7,500. At the time, the dealer said merely that the portrait was "brought to this country by a refugee some time ago, and I wish I were able to supply you with more information." In 1943, French dealer Robert Lebel provided a lead, telling the MFA that he had sold the portrait to Westfeld and that soon afterward the Nazis arrested the Jewish dealer and sold off his artworks.

So, what does a "curator of provenance" do? The MFA's Victoria Reed investigated Westfeld's life and found that he had run a gallery in Germany until 1936, when the Nazis forced its closure. He continued to deal in artwork secretly, but was arrested in 1938 and sent to Auschwitz in 1943, where he died. Reed was unable to track the painting's path directly from Nazi-era Germany to New York, but she obtained a 1939 catalogue for the forced auction of Westfeld's stock and concluded that any sale of the work must have occurred under duress.

Walter Westfeld's older brother fled to the U.S. in 1939 with his wife and son, Fred. They added an "i" to the family name and settled in Nashville, Tennessee. In recent years, Fred Westfield has tried to track down his uncle's collection, and he unsuccessfully sued the German government for millions of dollars for the forced 1939 auction of Westfeld's artworks. According to Art Unwashed, he lost that suit in February when the court ruled that his attorneys did not prove an exception to the Federal Sovereign Immunities Act, which prevents foreign nations from being sued. At the time, Westfield's attorneys said that they were considering an appeal to the U.S. Supreme Court.