A MONUMENTAL cityscape painting by Austrian artist Egon Schiele has smashed the world record after it was sold for $37 million at a London auction. 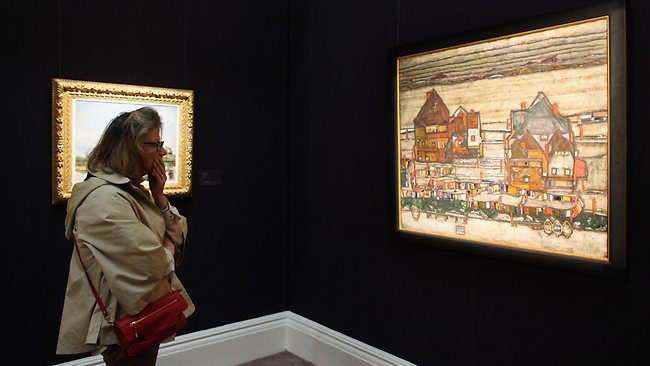 A woman admires a painting by Egon Schiele which has sold in London for a record price of $37 million at a Sotheby's auction. Source: Getty Images

The 1914 oil painting is "loosely based on motifs drawn from Krumau", the Southern Bohemia town in which the artist's mother was born and which inspired some of his greatest works, Sotheby's said.

Proceeds from the sale of the work, completed four years before the artist died aged 28, will go towards resolving a long-running dispute over an art work stolen by the Nazis.

A US court last year ordered Vienna's Leopold Museum, which owned the auctioned painting, to pay $19 million to the heirs of Lea Bondi Jaray, a Jewish art dealer who owned another of Schiele's paintings before it was taken by Nazi Friedrich Welz.

"Portrait of Wally" eventually found its way into the hands of the museum, which decided to sell Haeuser mit bunter Wasche to fund the compensation claim, keeping hold of the disputed work.

Peter Weinhaupl, Managing and Finance Director of the Leopold Museum, said: "We are extremely pleased with the results Sotheby's has achieved" and added it would "allow the museum to move forward with its goals."

Overall, the sale reaped $92m with a sculpture by Alberto Giacometti going for $10m.

Three works by Pablo Picasso, each depicting a different one of the Spanish artist's lovers, sold at a London auction on Tuesday for a total of $64m.