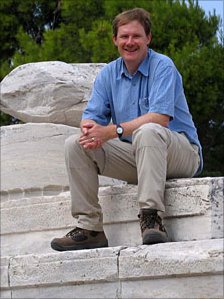 David Gill said he was extremely honoured to win the award

A Swansea academic has won an international award for his work in tackling the illicit trade in antiques.

For the last 20 years Dr David Gill has researched an array of ancient treasures.

These include the marble Aphrodite which the J. Paul Getty Museum paid $18m (£11.1m) for but later returned to Italy after claims it was stolen.

He will receive the Archaeological Institute of America's (AIA) Outstanding Public Service Award.

The Swansea University academic said: "We've been looking at the way ancient art and archaeological objects have been turning up on the markets both in London and in north America."

He has also researched a series of photographic archives that were seized in Switzerland.

They included the Euphronios Krater, a 2,500-year-old Greek vase, from New York's Metropolitan Museum of Art.

Italy said it was illegally removed from the country.

He told BBC Radio Wales: "We've seen something like 130 pieces returned from north America since 2006."

He said pieces were sometimes acquired by "people going out at night and digging things up" and then selling them on.

The illicit trade could be worth around $50 to $60m a year, he estimated.

"We are not actually sure . . . it's very hard to quantify, these are criminal acts."

As well as being contributing editor of the Journal of Art Crime, he also runs a blog called Looting Matters.

The AIA said it helped to "shine a light on the antiquities market" and was one of the "go to" sources for information about the trade in undocumented antiquities.

Dr Gill will received the ward at the AIA's annual meeting in Philadelphia in January.

He said: "I am extremely honoured."

AIA president Elizabeth Bartman said: "This nomination has been greeted with enthusiastic approval by the AIA's governing board and I am delighted to recognize his ongoing efforts to educate both professional archaeologists and the public at large on the threats posed by the international antiquities trade."