Israel taking Holocaust restitution into its own hands

NEW YORK (JTA) -- The Israeli government is firing a new salvo in the turf war over Holocaust restitution.

Following years of complaints by survivors about opacity and unjust allocation decisions by the Claims Conference, and after two decades of what critics deride as scant tangible successes by the World Jewish Restitution Organization (WJRO), a new Israeli restitution organization is amassing hundreds of thousands of new claims for survivors and their heirs. 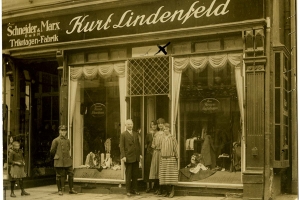 The Kurt Lindenfeld store in Chemnitz, Germany, seen here in the 1920s, was one of thousands of German Jewish businesses that vanished during the Nazi era. (N.Y. Museum of Jewish Heritage)

Called Project Heart, an acronym for Holocaust Era Asset Restitution Taskforce, the initiative comes at the behest of the Israeli government and aims to compile claims relating to assets stolen, confiscated or looted throughout Europe. Project Heart says it has collected information relating to some 500,000 stolen assets -- from real estate, bank accounts, businesses and insurance policies to art and jewelry -- and has handled 30,000 inquiries from survivors or heirs.

However, there are no agreements in place with any European countries to offer compensation for the stolen Jewish property.

“I certainly hope that the people that are responding affirmatively to the request for information by Project Heart aren’t building up their hopes for immediate results,” said Julius Berman, the chairman of the Claims Conference, which also is an organizational board member of the WJRO.

The project is one of two major restitution efforts being spearheaded by the Israeli government. The other, Hashava, a program to restitute Israeli assets purchased in prestate Palestine by Jews who perished in the Holocaust, already has disbursed some $115 million.

The establishment of Project Heart is an implicit indictment of the WJRO, which is charged with recouping restitution from European countries other than Germany and Austria but which has made little headway, particularly in the area of private property restitution.

It’s also a signal that the Israeli government, which is funding Project Heart with some $2.4 million annually for three years, is going on its own in seeking restitution rather than working through existing Diaspora-led organizations. Israelis long had claimed that they were underrepresented on the Claims Conference board, and even though the WJRO is based in Israel, its board and executive committee are dominated by Diaspora members.

So far, there are no plans for collaboration between Project Heart and the Claims Conference or WJRO, even though they share a sponsor in the Jewish Agency for Israel. That has rankled officials like Berman.

“I really don’t understand why this type of endeavor was not presented to the WJRO,” he told JTA.

The initiative for Project Heart came from an Israeli government decision in February 2007 following strong pressure by the Pensioners’ Party, which at the time controlled seven seats in the Israeli legislature. It took two more years for the project to become formalized. The chairman of Project Heart’s advisory committee is the former head of the largely defunct Pensioners’ Party, Rafael Eitan.

The project’s establishment will be announced formally in Jerusalem on May 1, the eve of Yom Hashoah, or Holocaust Remembrance Day.

With nearly $8 million to spend over three years, Project Heart dwarfs the WJRO, which has a $600,000 annual budget funded by the Claims Conference, the American Jewish Joint Distribution Committee and the Jewish Agency.

The ad spending alone for Project Heart, which receives 92.5 percent of its funding from the Israeli government and the balance from the Jewish Agency, exceeds $500,000. Thanks to an anonymous donor, the ads include an electronic billboard commercial that appears in New York’s Times Square for 30 seconds every hour.

With its focus on countries that have not yet restituted prewar Jewish properties, Project Heart is yet another sign that the battle for restitution will not die with the survivors.

“To a large extent, we are empowering the next generation,” said Bobby Brown, director of Project Heart and a veteran of numerous restitution efforts. The idea, he said, is to “record whatever we can from this generation” of survivors and their children before their knowledge about prewar Jewish assets are taken to the grave.

The information is being collected and organized for Project Heart by A.B. Data, a Milwaukee-based data management company that has been involved in other class-action Holocaust restitution settlements. The company has set up a 24-hour call center for Project Heart with operators able to handle inquiries in 17 languages, and it’s mining newly available archives in Europe and elsewhere for information that might help substantiate Jewish claims.

Once the database of stolen assets is compiled, Project Heart plans to use the information to pressure European countries to pay up or reach a settlement with Jewish heirs.

“We received tens of thousands of phone calls and hundreds of e-mails thanking us for continuing the legacy of survivors who have passed on and told their children not to give up, not to forget,” said Anya Verkhovskaya, Project Heart’s administrative director. “They said we’re giving their parents and grandparents a voice and an opportunity to continue the fight.”

But Renee Firestone, 87, a survivor who lives in Beverly Hills, Calif., and filed a claim with Project Heart related to her father’s home and textile business in prewar Czechoslovakia, says she is skeptical that the new effort will result in any success.

“I will be very surprised if anything will really happen, if they will come up with some resolution,” Firestone said of Project Heart. “But I will get involved in anything that gives us some hope. We have to fight for everything.”

The major problem faced by Project Heart, like the one faced by the WJRO since its establishment in 1993, is how to compel European countries to pass restitution laws that are politically unpopular and against their economic self-interest. Unlike Germany, which long has acknowledged its culpability and been cooperative on restitution issues, most European countries have been slow to sign on to any kind of agreement that would involve restituting property taken illegally from Jews during the World War II years.

More typically, Holocaust restitution negotiations are seen by the public in Eastern and Central European countries as depicted in a June 2009 cover of the Lithuanian tabloid Vakaro Zinios (The Evening News): The image shows an outsized American rabbi as a villainous Shylock demanding “Give it now!” of a diminutive Lithuanian prime minister.

That same month saw a major gain for advocates of Holocaust restitution, when at a landmark conference in Prague on Holocaust-era assets, 46 countries signed a nonbinding declaration endorsing principles for faster, more open, and transparent restitution of art and private and communal property seized during the Nazi years.

Since the agreement, called the Terezin Declaration, some progress has been made toward inking agreements on restitution of communal property in Lithuania, Latvia, Hungary and Romania. But there have been setbacks, too: In March, the Polish government announced that it was suspending consideration of a restitution bill due to the difficult economic climate.

“The situation is not easy, I will not deny it,” David Peleg, the director general of the WJRO, told JTA. “Some of the countries tell us that because of the economic situation they just don’t have the money to support the legislation.”

For survivors like Firestone, who said five Holocaust survivor friends of hers had died in just the last month, it all amounts to the same thing: more delays.

“I really believe that they are waiting for us to be dead and then they can do whatever they want with the money -- the Europeans, the Claims Conference and the insurance companies,” Firestone told JTA. “They are dragging the situation out by not answering the questions, by not giving the money.”

For its part, the Claims Conference rejects the notion that it is hoarding money, saying the organization has accelerated payouts and pushed Germany harder in recent years.

“The Claims Conference knows we are in a race against time,” Berman said, “to provide a small measure of justice to as many Holocaust victims as possible in their lifetimes.”