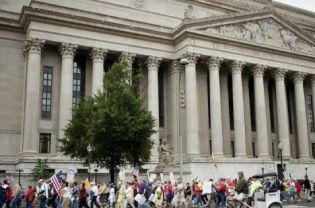 The US National Archives

The US National Archives on Thursday launched an international database of Nazi-era documents that officials said will make it easier to recover plundered Jewish artifacts.

The International Research Portal for Records Related to Nazi-Era Cultural Property will work with the National Archives of the United Kingdom, the Federal Archives of Germany, the State Archives of Belgium, the Commission for Looted Art in Europe, and various other groups to display millions of pages of detailed images.

The creators said that the site will catalogue cultural property that was stolen, looted, seized, forcibly sold, or otherwise lost during the Holocaust, in the hope of reuniting the lost objects with their rightful owners.

The property documented in the records, the National Archives said, runs the gamut from artwork to books to religious objects, antiquities, archival documents, carvings, and other artifacts.

"At the forefront of Holocaust restitution research efforts for over 15 years, the US National Archives has strived to identify its records and to make them widely available and accessible to all," said David Ferriero, archivist of the United States.

He said the new portal will help individuals and institutions recover their precious stolen assets.

"Researchers from all over the world will now be able to use a single point of entry to gain digital access to these widely dispersed archival materials," he said at a ceremony Thursday.