April
Guardian 5 May 2011
By Jonathan Jones

Hitler's looting of artworks was not exceptional. The quest to find them is really an expression of revulsion at his true crimes 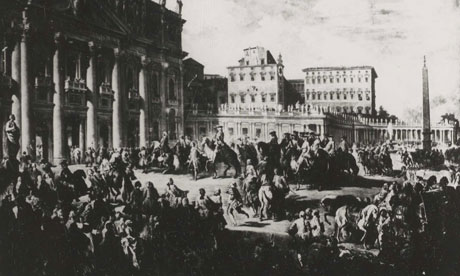 An archive of documents about artworks looted by the Nazis is intended to help track them down. Photograph: The National Archives

A troubling detail caught my eye in the new online archive of documents relating to art works looted by the Nazis. At the first meeting of the British Committee on the Preservation and Restitution of Works of Art in 1944, the critic Kenneth Clark "drew attention to the reported destruction of churches such as San Francesco at Arezzo", which, he said, "suggested that our bombing was not always accurate".

Clark's warning seems to have fallen on deaf ears – it just hangs there in the document, a footnote to the committee's plans to hound German art thieves and their collaborators. But he was right. British and American bombing strategists paid little attention to the safety of cultural treasures in 1944 and 1945. As a result they destroyed infinitely precious works of art, including an entire fresco cycle by Benozzo Gozzoli in Pisa and masterpieces by Caravaggio and Courbet in German museums.

This archive has not been created to mourn those casualties of war. It is part of a pursuit of Nazi art looters and the collections that benefited from their wholesale seizure of art from Jewish owners, many of whom died in the Holocaust. These documents are intended to help researchers establish provenances and descendants of the rightful owners bring law cases to reclaim family property, often from famous museums. But do the documents actually aid this quest, or point to a more complex history?

At that same meeting in 1944, the British committee took the relevant clauses of the Treaty of Versailles as its model. In fact the war settlement in 1945 would go out of its way to avoid the harsh measures of Versailles. Some might read the documents that show the frustration of the committee's ambitions to reclaim art in liberated Europe as a record of betrayal: "We consider this scheme premature and unworkable," notes an official. But surely it was not so much betrayal as a deliberate avoidance of Versailles-style punitive measures.

Were the Nazis the most destructive art looters in history? The documents here give ample evidence of how brutally they appropriated art. In the bunker, Hitler admired plans for his great art museum as a distraction in his final days. But Napoleon had stolen the treasures of Italy, and some are still in Paris. As for the Rosetta Stone that his troops took from Egypt, the British restored it – to London.

No, it is not the art looting of Hitler's Germany that was exceptional. Hitler's true crimes were genocide and mass murder. The quest for every artwork looted by the Reich is really an expression of revulsion at those crimes.

But how is anyone brought back when a painting by Klimt is legally removed from an Austrian museum, sold for a record price, and hung in a museum in New York? This is what happened to Klimt's Portrait of Adele Bloch-Bauer I in 2006. This painting of a Jewish collector had shone in Vienna as a glorious reminder of the Jewish character of this city in the golden age of Klimt and Freud. In removing it, and selling it abroad, the campaigners for restitution actually diminished the evidence of Vienna's Jewish heritage in the city itself – a strange victory for truth.