April
Bloomberg 5 May 2011
By Scott Reyburn

A cityscape by Egon Schiele valued at a record $50 million will be auctioned to pay for the settlement of one of the world’s longest-running art restitution cases.


Portrait of Wally" (1912) by Egon Schiele. The Leopold Museum in Vienna paid $19 million in a settlement, ending a decades-long dispute between the museum and the heirs of Jewish art dealer, Lea Bondi Jaray. Source: Leopold Museum via Bloomberg

The Leopold Museum, Vienna, is selling the 1914 work in London with a top estimate of about 30 million pounds on June 22 after agreeing to end an ownership dispute over another of the Austrian Expressionist’s paintings, the U.S.-based auction house Sotheby’s (BID) said in an e-mailed statement today.

Schiele’s “Haeuser mit bunter Waesche, ‘Vorstadt’ II,” showing houses with washing lines, has a low estimate of 22 million pounds and is guaranteed a minimum price by a third- party “irrevocable bid,” Sotheby’s said. The valuation exceeds the $22.4 million paid in 2006 for a cityscape at Christie’s International. Sales of museum-quality oils by the short-lived artist (1890-1918) are becoming increasingly rare.

“This is a great opportunity,” said Eberhard Kohlbacher, partner in the Vienna dealership Wienerroither & Kohlbacher. “You have a few restitution cases, then it will be finished.” 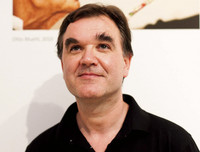 Diethard Leopold, a Viennese psychotherapist and son of Rudolf Leopold, founder of the Leopold Museum. Leopold says he aims to settle all outstanding Nazi-era claims for art in the museum's collection within a year. Photographer: Ian Ehm/Leopold Museum via Bloomberg

The museum was founded in 1994 by the Viennese optician and collector Rudolf Leopold, who died in 2010. It owns more than 220 works by Schiele, including another eight cityscapes.

In 1998, Schiele’s 1912 portrait of his lover Walburga (Wally) Neuzil was seized by a district attorney after being loaned to an exhibition at the Museum of Modern Art, New York.

Descendants of the Jewish art dealer Lea Bondi Jaray claimed that “Wally,” acquired by Leopold in 1954, was stolen by the Nazis in the 1930s. The claim was upheld by a federal court in Manhattan in 2009, prompting the Viennese museum to make an out-of-court settlement of $19 million last year to keep the painting.

The museum also had to pay as much as 3.5 million euros ($5.2 million) in legal costs, Leopold director Peter Weinhaeupl said. The complex case resulted in 44 countries drafting guidelines for the return of looted art known as the Washington Principles.

(Scott Reyburn writes about the art market for Muse, the arts and culture section of Bloomberg News. Opinions expressed are his own.)

To contact the writer on the story: Scott Reyburn in London at sreyburn@hotmail.com.