Amid mounting calls by scientists for the Smithsonian Institution to cancel a planned exhibition of Chinese artifacts salvaged from a shipwreck, the institution will hold a meeting on Monday afternoon to hear from critics. 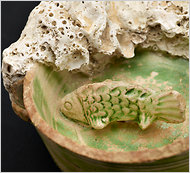 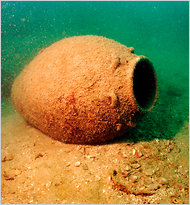 Ceramic pots were among the 63,000 artifacts in the haul. 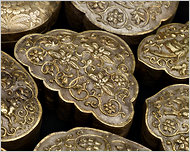 Silver decoration on Tang-era boxes found in the wreck.

The contents of the exhibition, “Shipwrecked: Tang Treasures and Monsoon Winds,” were mined by a commercial treasure hunter and not according to academic methods, a practice that many archaeologists deplore, equating it with modern-day piracy.

In an April 5 letter to the top official at the Smithsonian, G. Wayne Clough, a group of archaeologists and anthropologists from the National Academy of Sciences — including Robert McCormick Adams, a former leader of the Smithsonian — wrote that proceeding with the exhibition would “severely damage the stature and reputation” of the institution.

The members of the National Academy of Sciences are not alone. In recent weeks organizations including the Society for American Archaeology, the Council of American Maritime Museums and the International Committee for Underwater Cultural Heritage, as well as groups within the Smithsonian, including the members of the anthropology department and the Senate of Scientists at its National Museum of Natural History, have urged Mr. Clough to reconsider.

The exhibition was conceived by the government of Singapore, which owns the artifacts, and Julian Raby, the director of the Freer Gallery of Art and the Arthur M. Sackler Gallery, the Smithsonian’s two Asian art museums. It is on display in Singapore through July and will then travel internationally. Although the Smithsonian says it has not made a final decision, the exhibition — which includes glazed pottery, rare pieces of early blue-and-white porcelain and the largest gold cup ever found from the Tang Dynasty (618-907) — is tentatively set to arrive at the Sackler in the spring of 2012.

Monday’s meeting was called by Mr. Raby and Richard Kurin, the Smithsonian’s undersecretary for history, art and culture. A final decision about whether to proceed will likely be made in late May, according to a Smithsonian spokeswoman, Linda St. Thomas.

The probable historical importance of the shipwreck, which was discovered by fishermen off Belitung Island in Indonesia in 1998, has only inflamed the debate.

The ship, which is believed to be Arab, was filled with a cargo of ninth-century Chinese ceramics and gold and silver vessels. Its discovery suggests that Tang China had substantial sea trade with the Middle East; scholars had previously thought that the trade routes were primarily over land, along the Silk Road.

The exhibition “brings to life the tale of Sinbad sailing to China to make his fortune,” Mr. Raby said this year. (Mr. Raby declined to be interviewed for this article, according to a spokeswoman, because he wanted to keep an open mind for Monday’s discussion.)

Archaeologists, however, say that because the shipwreck was commercially mined within a period of months, rather than the many years that a more structured archaeological excavation would have taken, much of the information it might have provided about the ship’s crew and cargo was lost.

Kimberly L. Faulk, a marine archeologist and vice chairwoman of the nongovernmental Advisory Council on Underwater Archaeology, said in an e-mail that by proceeding with the exhibition the Smithsonian — which is a research institution as well as a network of museums — would be violating its own set of professional ethics and promoting the looting of archaeological sites.

Commercial treasure hunting is a high-stakes world. Companies sometimes spend millions of dollars searching for and mining a shipwreck and then cleaning up the finds in the hope of selling the artifacts for a huge profit at the end.

The company that salvaged the Belitung wreck, Seabed Explorations, is run by a German engineer, Tilman Walterfang. In the early 1990s Mr. Walterfang was a director at a concrete company in Germany when his Indonesian employees’ stories about the rumors of shipwrecks lying on the bottom of the ocean in Indonesia prompted him to move across the world.

Although a 2001 Unesco convention outlawed the commercial trade in underwater heritage, Indonesia has not ratified it. (Neither has the United States.) Indonesia allows commercial mining of shipwrecks as long as a company is licensed and splits its finds with the government.

In an e-mail Mr. Walterfang said that when fisherman first discovered the shipwreck in early August 1998, the Indonesian government, fearful of looting, ordered Seabed Explorations to begin an immediate round-the-clock recovery operation. It started within days.

Although Mr. Walterfang eventually brought in a pair of archaeologists, including one, Michael Flecker, who wrote two journal articles about the ship, Mr. Walterfang conceded that, from an academic standpoint, “the overall situation would without doubt be described as ‘less than ideal.’ ”

After fielding interest from China, Seabed Explorations sold the majority of the 63,000 artifacts recovered to a company owned by the Singapore government, for $32 million.

The Indonesian government kept slightly more than 8,000 objects from this ship, along with $2.5 million and finds from another ship excavated by Mr. Walterfang. Some artifacts have ended up on eBay and other online sites; Mr. Walterfang said that these were probably looted by fishermen while the recovery process was halted for the monsoon season, between December 1998 and March 1999.

Mr. Walterfang was dismissive of the exhibition’s critics, suggesting that the exhibition was being used as a “Ping-Pong ball in yet another political game for the social climbers in Washington, D.C.”

Mr. Flecker, the archaeologist who studied the ship, argued in a 2002 article in The International Journal of Nautical Archaeology that the purist approach of many archaeologists was not practical in developing countries like Indonesia, where governments are poor and the risk of looting is high.

In those circumstances, he wrote, archaeologists and commercial salvagers should cooperate “to document those sites and the artifacts recovered from them before too much information is lost.”

But in the eyes of archaeologists like James P. Delgado, the director of maritime heritage at the United States Department of Commerce National Oceanic and Atmospheric Administration, allowing any of the finds from an excavation to be sold betrays the most basic aspects of research, in which “sometimes it’s the smallest things that we come back to that make the great leaps forward.”

Mr. Delgado said he wished the Belitung shipwreck had been academically excavated. But unlike some of his colleagues, he said that instead of canceling the exhibition, the Smithsonian could use it to educate the public about the consequences of the commercialization of underwater heritage.

If, however, the exhibition merely celebrates the discovery without addressing the problematic context, Mr. Delgado added, “there will be a clear message to Indonesia” that these practices “are fine,” and to other countries with rich maritime heritage to “engage in these things and sell it off.”