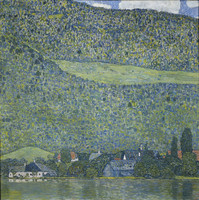 The Austrian province of Salzburg said it will return a landscape by Gustav Klimt to the heir of a Jewish woman who was murdered by the Nazis, after research showed the artwork was looted from her apartment by the Gestapo.

The oil-on-canvas landscape, “Litzlberg am Attersee” (Litzlberg on the Attersee), is “one of the best and most valuable masterpieces” in Salzburg’s Museum of Modern Art, the provincial government said in a statement on its website.

The 1915 picture belonged to Amalie Redlich until she was deported to Poland in 1941 and murdered. The Gestapo cleared her apartment after her forced departure. The painting will now return to her grandson and heir, Georges Jorisch, Salzburg said.

The return of the painting is “painful -- not just for the Museum of Modern Art’s collection, but for our state and for all Austria,” said Wilfried Haslauer, deputy governor of Salzburg. Still, he said, the state “cannot allow itself to be the beneficiary of a criminal regime.”

Austria is one of 44 countries that in 1998 agreed on non- binding principles to return Nazi-looted art in public collections to the prewar owners and their heirs. In 2006, it was forced to relinquish five Klimt paintings after a court ordered their return to Maria Altmann of California.
"Litzlberg am Attersee" (1915) by Gustav Klimt. The painting will be returned by the Salzburg regional government to the heir of a Jewish woman murdered by the Nazis.

In 2009, a sixth Klimt painting, the unfinished “Portrait of Ria Munk II,” was returned from the Lentos Museum in Linz to the heirs of Aranka Munk. It was valued at more than $25 million by auction house Christie’s International.

“Litzlberg am Attersee” was acquired after 1941 by the Salzburg art dealer and collector Friedrich Welz, who swapped it for an artwork in the Salzburg collection, the statement said.

Klimt turned to landscapes relatively late in his career. Many were painted at Attersee, a lake in western Austria, where he spent almost every summer from 1900.