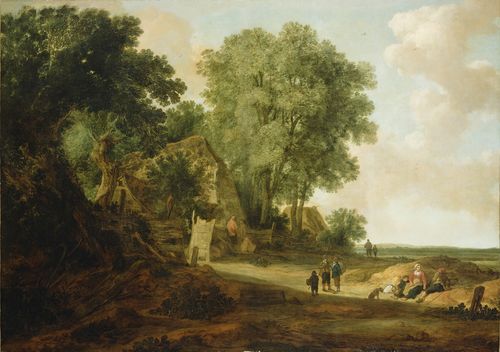 "Landscape With Cottage and Figures" was part of a collection taken over by Nazis. (The J. Paul Getty Museum)

The Getty Museum is the first museum in North America to agree to return a painting to the heir of Jacques Goudstikker, a noted Dutch-Jewish art dealer whose huge collection was dispersed after he fled the 1940 Nazi invasion of Holland, with many of the prime works taken for the personal collection of Adolf Hitler's chief deputy, Hermann Goering.

The museum's two-paragraph announcement Monday said it had bought "Landscape With Cottage and Figures," painted around 1640 by Pieter Molijn, "in good faith" at a 1972 auction. The Dutch artist's painting has never gone on display. The Getty declined Monday to say how much it had paid.

A far more prominent work housed in Southern California, the Norton Simon Museum's paired "Adam and Eve" paintings by Lucas Cranach the Elder, remains a hotly disputed prize from Goudstikker's collection. Since 2007, the art dealer's daughter-in-law, Marei von Saher, has been trying to reclaim it through a federal lawsuit.

"It is always encouraging to see an important cultural institution like the Getty Museum decide to do the right thing for Holocaust victims and their heirs," Von Saher said in a statement Monday.

Her attorney, Lawrence Kaye, said that the large Molijn canvas the Getty is expected to return this week had been attributed until the 1970s to another artist, Jan van Goyen.

"We're very happy that the Getty has returned this work," Kaye said, adding that Von Saher, who lives in Connecticut, is hopeful the Getty's decision will influence four other museums in the United States and Canada, where she has identified former Goudstikker holdings she believes should be returned. Private owners in North America have returned some works to her, Kaye said.

Cooperative research by the Getty and Von Saher's experts determined that Molijn's oil painting was among those recorded in a "black book" Goudstikker had with him when he fled the Nazis. He died in a fall on board the ship that was carrying him to safety with his wife and infant son.

About 1,000 of the 1,400 or so paintings that Goudstikker owned remain unaccounted for, Kaye said, and an art research team continues to try to track them down. An exhibition called "Reclaimed: Paintings From the Collection of Jacques Goudstikker," consisting of about 45 of the works Von Saher has recovered, will wind up a national tour on Tuesday, its last day at the Contemporary Jewish Museum in San Francisco.

The Getty has shown a more prominent former Goudstikker painting since its purchase in 2007, but there is no question that it properly belongs there. "Coast View With the Abduction of Europa," by Molijn's French contemporary Claude Lorrain, was looted by the Nazis in 1940, but Von Saher regained it as part of a 2006 settlement in which the Dutch government returned about 200 works from her father-in-law's former collection. Allied forces had recovered those paintings and conveyed them to the Dutch after World War II.

The Norton Simon Museum's "Adam and Eve" also were among the Goudstikker-owned works the Allies repatriated to Holland after the war. But the Dutch government subsequently sold them to an heir of Russian nobility who claimed that his family, the Stroganoffs, had a prior claim on them, having owned them before they were seized by the Bolsheviks during the Russian Revolution. Goudstikker bought them at an auction in 1931, then lost them to the Nazis. Whether "Adam and Eve" had belonged to the Stroganoffs during the early 1900s is part of the dispute between Von Saher and the Norton Simon Museum. The museum's founder and namesake bought them from the Stroganoff heir for $800,000 in 1971; the museum has had them appraised at $24 million.

In the "Adam and Eve" case, a federal judge in Los Angeles ruled in 2007 that Von Saher had filed her claim too late to meet the three-year statute of limitations for suing to recover allegedly stolen art, and that a 2002 California law suspending the statute of limitations for Holocaust-era art-restitution claims filed through the end of 2010 was unconstitutional because it intruded on the federal government's sole prerogative to set foreign policy and war policy.

The U.S. 9th Circuit Court of Appeals agreed in 2009 that the California law was unconstitutional, although it directed the trial judge to reconsider whether Von Saher nevertheless has a legitimate claim under the regular statute of limitations.

Von Saher has appealed to the U.S. Supreme Court in hopes of reinstating the voided state law. The high court indicated in October that it is considering whether to take up the case, but first it asked the U.S. solicitor general to file a brief giving the federal government's view. Kaye, the Von Saher attorney, said the brief hasn't been filed yet.

Meanwhile, in October, Gov. Arnold Schwarzenegger signed a law that extends the statute of limitations for claims concerning art allegedly looted during the Holocaust from three years to six, improving Von Saher's prospects should she not succeed in the U.S. Supreme Court.