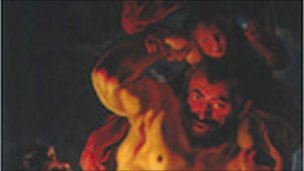 An investigation ordered by the Ulster Museum has quashed speculation that an Old Master hanging in Belfast was part of a haul looted by Nazis.

A Dutch art historian was called in to carry out an inquiry into the history of the ownership of the painting.

"I am glad I could bring it to what I believe is a satisfactory ending," historian Tom van der Molen said.

So, too, are museum chiefs in Belfast, who feared it was part of a priceless collection that ended up in the hands of Hitler's most trusted general, Reichsmarshall Hermann Goering, during the Nazi occupation of Holland in 1940.

The Ulster Museum bought the painting in 1966 for £9,000. But in recent years, questions began to surface about the provenance of the masterpiece when it was linked to the Dutch Jewish art collector Jacques Goudstikker.

The painting was mentioned in an inventory notebook that Mr Goudstikker carried with him when he died fleeing Nazi-occupied Holland in 1940.

This mention, according to art sleuth, Mr van der Molen suggested "the painting potentially had a problematic provenance".

The Goudstikker paintings were later returned to the Dutch state and handed back to Mr Goudstikker's heirs in 2006.

From evidence uncovered in the bowels of the Amsterdam city archives, Mr van der Molen was able to establish that the painting had indeed once belonged to the Goudstikker family but was not part of the collection that was looted by Goering.

One theory is that the painting may have been outside Holland at the time and escaped the clutches of the Nazis.

Correspondence unearthed by the art historian showed that the painting had been in the collection of Mr Goudstikker's widow, Desi von Saher, until March 1965 when she sold it on.

"The sale from von Saher is unproblematic and occurred in a friendly atmosphere. Subsequent sales are also unproblematic," Mr van der Molen said.

"There is no reason to believe it has had a problematic provenance in World War II, since it would have then been restituted to the Dutch state and not have been in the possession of the Goudstikker heirs."