Until yesterday, 37 icons from the Andrey Rublev Museum were on loan to the Museum of Russian Icons in Clinton, Massachusetts, for a show called "Treasures from Moscow." But the Russian culture ministry has taken the rare legal step of invoking "force majeure" — essentially claiming a state of emergency — to revoke the works, sending a curator to oversee their return to Moscow. The museum's show has now become the most spectacular victim of a diplomacy-testing Russian ban on art loans to the United States, one that U.S. officials and museum leaders feel is extremely misguided. 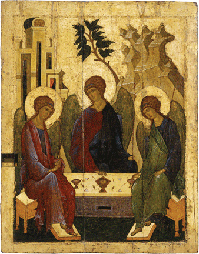 "Old Testament Trinity," circa late 15th
to early 16th century, was revoked from the show.

The source of the recent ban is a legal dispute over an unusual Jewish archive. Russia holds a large collection called the Schneersohn Library, named after the founder of the Chabad-Lubavitch Hasidic movement. Its followers in Crown Heights, Brooklyn, have long sought the archive's return, and last July a federal judge ruled in their favor and ordered Russia to return the trove of books and documents. Moscow disputes the ruling, and Russian culture minister Alexander Avdeyev said in January that the ban was necessary to prevent the U.S. from seizing loaned artworks in order to force the country to return the cache.

But, according to Gregory Guroff, president of the Maryland-based Foundation for International Art and Education, the Russians have misinterpreted the law, and the loans are in no danger. "They're crazy," he told the Worcester, Massachusetts Telegram. "They are creating a scandal when there is none there. They... are calling back items that are protected and granted immunity by the State Department."

The Russian art loan ban has prevented one of Cézanne's paintings of card players from traveling to the Metropolitan Museum and several of Gauguin's Tahitian paintings from being shown at the National Gallery. The recall of the Russian icons, however, appears to be the first time that the art ban has disrupted a show that was already in progress.

Located about 35 miles west of Boston, the museum has over 450 icons and is the largest collection of Russian icons in North America. Museum founder Gordon B. Lankton told the Telegram that he was dismayed to see the icons go. "Someone in the Russian government is very persistent," he said. "It seems to be a personal vendetta between a couple of people, but I don't know who those people are... this is unrelated to anything said or done by the Museum of Russian Icons."