Will Austria part with Hitler’s Vermeer? 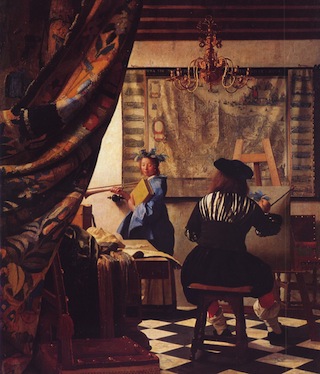 'The art of painting' by Jan Vermeer

If only Adolf Hitler had been accepted to art school, the old joke goes, he never would have felt the need to conquer the world. Unable to fulfill his dream of becoming an artist, Hitler rampaged through Europe looting and pillaging its great treasures. One of his trophies, Jan Vermeer’s “Artist in his Studio”, is again at the center of controversy, as Austria’s art restitution advisory board considers on March 18 whether it should be returned to the heirs of its prior owner.

Austria came into possession of the Vermeer by nationalizing the painting at the end of World War II. It currently hangs in Vienna’s famed Kunsthistorisches Museum. Hitler had obtained it in 1940 and planned to have it as the centerpiece of his museum in his hometown of Linz, Austria. The museum was never built.

Prior to World War II, the Vermeer was owned for many years by the aristocratic Czernin family. Count Jaromir Czernin-Morzin inherited the painting. He considered selling it. The American industrialist Andrew Mellon offered to pay $1 million, which would have made it the most expensive painting in the world. But the Austrian authorities wouldn’t allow the painting to leave the country, and so Czernin held onto it.

When Hitler marched into Austria in March 1938, Czernin was put in a difficult position. His new wife, Alix-May, was the granddaughter of a famous Jewish banker named Oppenheim. As a result, she and her former husband, Roland Faber-Castell, had been subjected to vicious anti-Semitic attacks in the popular Nazi tabloid, Der Stürmer. Czernin’s sister was also married to Hitler’s chief opponent in Austria, former chancellor Kurt Schuschnigg, who was kept imprisoned from 1938-1945. Czernin had to be careful not to run afoul of the new Nazi bosses.

In 1939, a cigarette manufacturer from Hamburg, Philipp Reemtsma, who was also a close friend of Reichsmarschall Hermann Göring, offered to purchase the Vermeer for RM 1.8 million (about $720,000). Although Göring gave his support to the deal, Austrian officials managed to block it by begging Hitler to intervene. Hitler’s secretary sent a telegram declaring that the painting could not be moved without Hitler’s approval.

Jaromir’s wife was still suffering anti-Semitic attacks. In February 1940, the Gestapo (Nazi secret police) intervened in her child custody dispute with her former husband, stating that she was unfit to be a mother. Later that year, she was officially declared “Jewish and an enemy of the State” and her passport was ordered to be taken away.

Hitler had his heart set on obtaining the Vermeer. In September, he set his henchmen in motion. Hitler’s private secretary, Martin Bormann, asked around if any outstanding taxes could be used to take the painting away. Hans Posse, Hitler’s special envoy in charge of obtaining artworks for the planned museum in Linz, was dispatched to Czernin’s home to negotiate the purchase of the painting at Hitler’s price. Posse told Czernin he might as well sell, because Hitler would get the painting “one way or another.” Hitler set the price at RM 1.65 million, or about $660,000 and Czernin had no choice but to agree.

Even after selling the painting to Hitler, Czernin and his wife did not escape persecution. Alix-May was driven from their home in Bohemia in 1942 and Czernin was forced out a year later. In 1944, Czernin was arrested by the Gestapo. He was held in prison and forced to do manual labor, but was never charged with any crime.

After the war, Czernin sought to recover his painting. But the Austrians, having nationalized the painting, balked at returning it. They claimed that Czernin and his wife could not have been persecuted because Alix-May had only been one quarter Jewish. The restitution tribunal determined that Czernin had “freely chosen” to sell to Hitler. Czernin’s appeals fell on deaf ears, and, betrayed by his own country, he died a broken man.

This Friday, the case of Hitler’s Vermeer will once again be reviewed by an advisory committee appointed by the Austrian government. Over the past 12 years, this committee has returned hundreds of works from Austrian museums to persecuted families, but not without controversy. The committee famously refused to return the Klimt paintings taken from the Bloch-Bauer family, valued at over $300 million, and those were recovered only after eight years of litigation ended with an arbitration ruling overturning the committee’s decision. Will the committee once again struggle to hold on to a valuable painting, notwithstanding its Nazi taint? Or will Austria finally come to terms with its Nazi past and clear its museums of their ill-gotten treasures?

E. Randol Schoenberg is an attorney in Los Angeles, California. He represents Helga Conrad, the step-daughter of Jaromir Czernin-Morzin. During the past decade, he has litigated several prominent Nazi-looted art cases, including Republic of Austria v. Altmann, which resulted in the return of five paintings by Gustav Klimt valued at over $300 million.

For a detailed analysis see VermeerAnalysis.pdf.