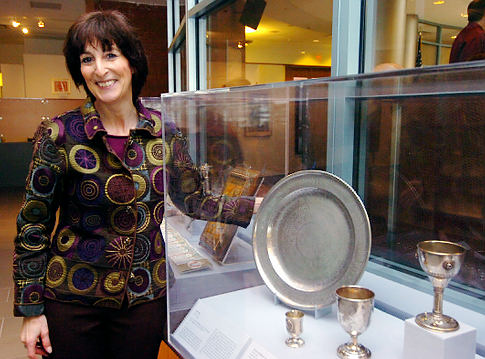 At the Hebrew Home for the Aged, genealogist Karen Franklin shows Seder plate taken during WWII by the Nazis when they looted Jewish people's homes.

When a large, silver Seder plate was donated to the Derfner Judaica Museum in Riverdale in 2001, genealogist Karen Franklin, the museum's director at the time, knew she had to learn its history."If it was looted, we had to give it back," she said.

The story of the Seder plate would unfold in twists and turns over the next 10 years, and it would join the long roster of Nazi-era items that have become Franklin's life work.

Franklin has traveled the world tracking down art pieces and possessions stolen from Jewish homes in Germany during World War II. She returned Wednesday to the Derfner Judaica Museum on the campus of The Hebrew Home to share some of those stories.

"Returning something that belonged to a family who lost it during the Nazi era is one the the most fulfilling things that I do," Franklin told a rapt audience of nearly 40 community members and Hebrew Home residents.

In 2006, she was called on to find the heir to 12 paintings on display at the Jewish Historical Museum in Amsterdam. The museum had put on a special exhibit called "Looted, but from Whom?" It was the Dutch government's attempt to return the stolen items.

Franklin managed to track down an engagement announcement online for a relative of the family who originally owned the paintings. Through her work, the family received about $300,000 in compensation.

Many of her findings don't make headlines, Franklin said, but their recovery is nonetheless priceless.

"You hear about the major properties worth millions of dollars," she said, "but there's not a lot written about those little items that were pilfered from these homes."

When a woman from Philadelphia donated the Seder plate to the Derfner Judaica Museum in 2001, Franklin had no idea it would spark a decade-long hunt that took her to Germany and Israel.

It turned out that the plate was taken from a Jewish home by a German soldier, but under surprising circumstances.

The soldier was married to a Jewish woman, who was the only survivor of her family. He rescued the plate, and it was handed down through the family, winding up with the woman from Philadelphia, a distant relative to the soldier.

Franklin has told the story of that Seder plate at many functions.

"People ask 'Was it worth all that effort for a plate that couldn't cost more than $200?'" she said. "And I say 'It doesn't matter if it's worth $200 or $2 million. If you're returning something to a family member, it is priceless.'"

"There's a lot of history about this art that to this day we still don't know what's happened to the majority of it," Maas said. "I find it very interesting."