Maria Altmann was a 22-year-old Jewish bride from a wealthy Viennese family, just back from honeymoon in Paris, when Hitler annexed Austria in 1938. Nazi officers helped themselves to her family’s jewellery and works of art, including five famous Gustav Klimt paintings. Sixty years later, Altmann was an 82-year-old grandmother in Los Angeles when Hubertus Czernin, a campaigning Austrian journalist, uncovered documentation to suggest that the paintings, by then in the Austrian National Gallery in Vienna, should still belong to her family and not the Austrian state.

In 2006, a few days before her 90th birthday and after an eight-year legal battle, Altmann won the paintings back for her and the families of her four siblings. They included Klimt’s “gilded” 1907 portrait of Altmann’s aunt, the Vienna society hostess Adele Bloch-Bauer, which Maria immediately sold to Ronald S. Lauder, the US businessman and collector, son of the late cosmetics queen Estée Lauder, for a reported $135m, a world record for a painting at the time. With its gold leaf embodying Vienna’s golden age of art and culture, it is now on permanent display in Mr Lauder’s Neue Galerie on New York’s Fifth Avenue. He calls it “the Austrian Mona Lisa”. 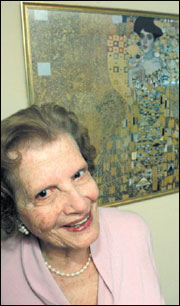 Altmann and the families of her brothers and sisters sold the other four Klimts at Christie’s, bringing in a further $192.7m, and they are now in the hands of private collectors.

Maria Viktoria Bloch-Bauer was born in Vienna, then the capital of the Austro-Hungarian empire, on February 18 1916 and “grew up hearing chamber music in the house every night”. Her aunt was the avant-garde, socialist, atheist hostess of a society salon in her palatial home on the city’s Elisabethstrasse, resplendent with art, Persian carpets, tapestries, fine porcelain and an army of liveried servants. Klimt himself was a regular visitor, as were the composers Richard Strauss and Gustav Mahler and the Austrian branch of the Rothschilds.

The family’s charmed life, along with those of most Jews, fell apart after Hitler’s Anschluss of Austria in March 1938, when the Bloch-Bauers saw their homes, their profitable sugar refinery and all their art confiscated. “They now say Austria was a victim of the Nazis,” Altmann once said. “Believe me, there were no victims. The women were throwing flowers, the church bells were ringing. They welcomed them with open arms. They were jubilant.”

Jews, however, fled in terror and many of the elderly committed suicide. Altmann said her father, Gustav, “died of a broken heart” two weeks after the Nazis took away his rare 17th-century cello made by the great Antonio Stradivari.

After Maria’s opera singer husband Frederick (“Fritz”) bought his way out of Dachau concentration camp, the couple fled via the Netherlands and Liverpool to Los Angeles and became US citizens in 1942. Fritz worked for the Lockheed aircraft company while Maria ran a clothing boutique, blissfully unaware that the Klimts, now worth several hundred million dollars, were legally hers.

The gallery and the Austrian government insisted that Altmann’s aunt, the portrait subject of two of the Klimts, had bequeathed the works to the state. But the investigative journalist Czernin proved that Adele, before she died in 1925, had merely “asked” her husband Ferdinand to donate the Klimts to the state and that Ferdinand, childless, had later willed everything to his brother Gustav’s children, including Maria, although he had abandoned his works of art along with his properties when fleeing to Switzerland during the war. In any case, it appeared obvious that Adele would not have wanted to bequeath the works to pro-Nazi Austria or even postwar Austria had she envisioned anything like the Holocaust.

Czernin, already known for revealing the murky, anti-Semitic wartime past of his countryman Kurt Waldheim, former secretary-general of the UN, had got hold of documents held since the war in Austria’s ministry of culture in Vienna. These also showed that the postwar Austrian government had coerced Holocaust survivors into relinquishing some of their properties in return for export permits for goods they produced. After an embarrassed Austrian government pushed through a new restitution law, Altmann’s life-long family friend, the American attorney E. Randol Schoenberg, suggested she press the Austrian government to get back her family’s art.

Altmann thought Mr Schoenberg, grandson of the composer Arnold Schoenberg, a friend of her parents and aunt, had no chance of success. “I had never even thought of taking these paintings away,” she once said. “I was under the impression that they actually belonged to the Austrian state.”

Altmann and Mr Schoenberg fought the Austrian courts for eight years, winning the backing of the US Supreme Court in 2004, before an independent Austrian panel unexpectedly backed Altmann’s case and the Klimts – two portraits and three landscapes – were handed over.

Although she lived a simple life, Altmann had already become a millionaire in 1998 when a US federal judge awarded her and her relatives $21m in compensation for their other wartime losses, including the family sugar refinery.

During her legal battle against the Austrians, Altmann once said: “They will delay, delay, delay, delay, hoping I will die. But I will do them the pleasure of staying alive.” When the Klimts finally arrived in the US, she told The New York Times: “You know, in Austria they asked me: ‘Would you loan them to us again?’ And I said: ‘We loaned them to you for 68 years. Enough loans.’”

Altmann died at her home in Cheviot Hills, Los Angeles, on February 7 and is survived by her three sons and a daughter.