After the heirs of collector Baron Herzog filed a lawsuit this summer seeking the return of art confiscated during the second world war, the country responds 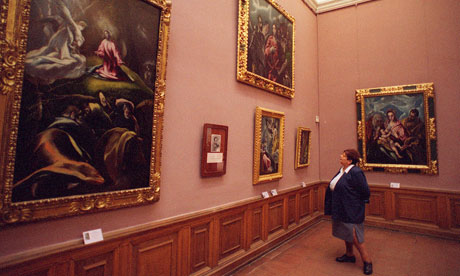 Works from Baron Herzog's art collection are now housed in Hungarian institutions, like the Museum of Fine Arts in Budapest, where El Greco's "The Agony in the Garden" hangs (above, foreground)

Washington, DC. The Republic of Hungary is seeking dismissal of a lawsuit against it claiming art from the prewar Herzog collection, saying that it is immune from the suit as a foreign state. While the plaintiffs are claiming exceptions to the normal rules barring lawsuits against foreign nations, the exceptions fail in the face of a 1973 US-Hungarian agreement that bars any suit against Hungary for the art, the country says. It adds that the US plaintiff in the case has already received compensation through settlements made in the US to his relatives. The motion to dismiss was filed in federal district court in Washington, DC on 15 February.

In July, the heirs of the Hungarian Jewish industrialist Baron Mór Lipót Herzog sued Hungary and four state-owned museums, seeking at least 40 valuable works from the Baron’s splendid prewar collection. The plaintiffs, US citizen David de Csepel and Italian citizens Angela and Julia Herzog, say that Hungary looted the art from its then owners, the Baron’s children, after the Nazis invaded Hungary in March 1944, and that they as the Baron’s heirs own it. The art is now in the collections of the Hungarian National Gallery, the Museum of Fine Arts, the Museum of Applied Arts and the Budapest University of Technology and Economics, all in Budapest.

The Baron’s private art collection was Hungary’s largest, comprising about 2,500 works including decorative arts, sculpture and masterpiece paintings by Lucas Cranach the Elder, Francisco de Zurbarán, Courbet, Corot and others, and including important works by El Greco said to make the collection now in Hungary second only to that held by the Prado.

The Nazi invasion of Hungary, as German losses mounted, initiated with vicious speed the death of five-eighths of the country’s Jewish population and the plunder of its real estate, art and property. The Herzog art was taken “by the Hungarian government and its Nazi collaborators” as part of a brutal genocide against Hungarian Jews, the heirs say.

Hungary not only stole the Herzog art, which the plaintiffs value at $100 million or more, but it wrongly renewed the family’s loss after the war by “hid[ing] behind fascist and Communist-era laws and acts and a subsequent Cold War agreement with the US” to keep it, the heirs allege. They are seeking return of the art, a declaration that they own it, a trust to enforce their ownership, damages and other remedies.

Normally, foreign governments are immune from lawsuit in US courts. But the heirs say they meet two exceptions under the Foreign Sovereign Immunities Act (FSIA): first, that Hungary took the art “in violation of international law” and second, that Hungary is engaging in “commercial activity” involving the art, which causes a “direct effect” in the US. The heirs say the museums earn profits from US tourism and book sales related to the Herzog works; and Hungary, acting as “custodian” of the art, is using it to earn profits from the US.

But Hungary says the suit cannot be brought in any event, because the 1973 US-Hungarian Claims Settlement Agreement overrides all FSIA exceptions, barring any claims in US courts for property Hungary took before 1973. Under the 1973 agreement, Hungary paid $18.9 million to the US “in full and final settlement” of all claims against Hungary by US nationals, who are instead to turn to their own government for resolution. The agreement specifically included claims for property nationalized or otherwise taken by Hungary, “whether or not” then brought to the Hungarian government’s attention, Hungary says. A 1954 Hungarian law nationalised “unclaimed” art at state-owned museums, it adds. The 1973 agreement with the US was part of an effort to relax tensions with East European countries. Hungary entered into a similar agreement with Italy the same year, which extinguished the claims by the two Italian plaintiffs, it says.

Under a US 1955 programme to benefit citizens who lost property to Hungarian takings, De Csepel’s grandmother and aunt already received compensation, Hungary adds. It also argues that the heirs fail the sovereign immunity exceptions, that Washington, DC is the wrong place to sue, and that the claims are too late.

Michael Shuster, counsel to the Herzog family, says he will urge the court to reach an independent decision on the merits of the family’s claim and disregard the technical roadblocks once more being raised by Hungary. “The U.S. is not a communist or post communist country,” said Shuster. “The Hungarian government must justify its looting from the Jews that it murdered and not hide behind a wall of lies. Other countries, such as Austria, Germany, France, The Netherlands, and Great Britain, refuse to allow technical arguments to defeat claims for restitution. Hungary, now holding the Presidency of the European Union, should comply with its ethical and legal obligations and honor its commitments to the resolutions of the European Council, the Washington Principles, and the Terezin Declaration.”

A response by the plaintiffs is due by 1 April.