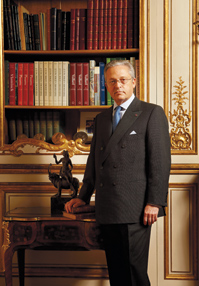 PARIS— Guy Wildenstein, the Old Master and Impressionist art dealer whose New York gallery had a decades-long partnership with the Pace Gallery that was dissolved last April, is already embroiled in one lawsuit regarding his late father's estate. Now he's been accused yet again of using executorship to take artworks that don't belong to him. French police seized 30 paintings from the Wildenstein Institute last month — including an Impressionist work valued at over one million dollars — which may have been stolen from the estates of two different collectors.

While investigating the previous suit against Wildenstein — filed by his late stepmother — a French anti-fraud unit photographed a room at the Institute with hundreds of artworks stacked from floor to ceiling, according to French magazine Le Point, which broke the story. Upon examining the photos, French police became suspicious that many of the works did not belong to Wildenstein, particularly a Berthe Morisot painting, "La Chaumière en Normandie" ("The Cottage in Normandy"), which bears an estimated value of €800,000 ($1.1 million). The painting had mysteriously disappeared from Anne-Marie Rouart's estate after her death.

When Anne-Marie Rouart died in 1993, the Académie des Beaux-Arts, her principal heir, was left with instructions to create a foundation that would place the majority of her collection in the Musée Marmottan. She left all the furnishings from her apartment in the stately Paris suburb of Neuilly to her nephew, Yves Rouart. According to him, the executors of her estate — Guy Wildenstein and Olivier Daulte — went to her apartment and removed certain paintings from the walls so that Rouart would not inherit them. Now that the Morisot has turned up in the Wildenstein Institute, Yves Rouart has filed a suit against Wildenstein, accusing him of "concealment of theft." "We have the right to ask the Wildensteins where the rest of the missing pieces are," Rouart told Le Point.

Alexandre Bronstein, a descendant of Joseph Reinach, whose collection was looted by the Nazis, also claims to have recognized several missing works in the police photos of the Wildenstein trove, including bronze pieces by Rembrandt Bugatti and two Degas drawings. According to Bronstein, when Reinach's daughter died in 1972, her will was executed by Daniel Wildenstein, father of Guy, and another art expert. Reinach alleges that the estate's inventory was never accurately drawn up and that therefore he and the other heirs have never been sure which works were stolen by Nazis and which were subsequently pilfered.

Among Reinach's heirs is 97-year-old Suzanne Reinach, a member of the French Resistance and a concentration camp survivor, whom Bronstein believes is the rightful owner of a Bugatti sculpture, "Group of Four Storks," which appears in photos of the Wildenstein stash.

When asked recently by Art+Auction's Judd Tully about the lawsuit filed by his stepmother, Wildenstein simply replied, "sadly, my stepmother passed away on November 15. The merits of the allegations have been deliberated, and various court decisions have vindicated our position." Now, of course, Wildenstein has further allegations to contend with.