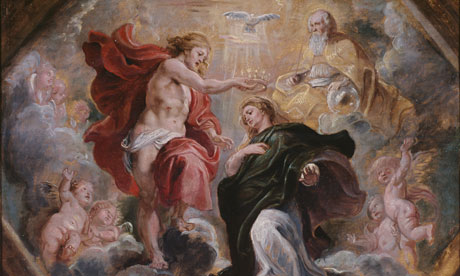 A detail from The Coronation of the Virgin, painted by Peter Paul Rubens in about 1613.© The Samuel Courtauld Trust, The Courtauld Gallery, London

A historically important painting of the Virgin Mary by Peter Paul Rubens will stay in Britain, after an emotional battle between the Courtauld Institute and the family of its original owner.

The Coronation of the Virgin was sold in haste by its Jewish banker owner, who was forced to flee Germany when the Nazis took over in the 1930s. More than half a century later, his descendants launched a claim to recover it, in a move that could have seen it leave one of Britain's most prestigious galleries. But after hearing lengthy arguments, parliament's Spoliation Advisory Panel, which rules on the ownership of disputed artworks, decided in favour of its current owner, the Courtauld Institute in London.

The panel heard that the painting – an oil sketch – had been in the collection of a German Jewish banker, Herbert Gutmann, son of the founder of the Dresdner Bank, Eugen Gutmann. An avid collector of Islamic art and European old master paintings and decorative arts, Gutmann was appointed as director of Dresdner Bank on his father's death, but had to step down in the wake of the 1931 German banking crisis. Five years later, he fled Nazi Germany for the UK, having sold his art collection at an auction house in Berlin in April 1934. His descendants maintain that he was forced to sell before the Nazis seized the collection and therefore the Courtauld was obliged to return the 46cm x 61.4cm work, believed to have been painted in 1613 and described in the auction house brochure as a "beautiful work of Peter Paul Rubens in his own hand".

The painting came to Britain after it was acquired at auction at Sotheby's by a noted collector, Count Antoine Seilern, who bequeathed it to the Courtauld Institute in 1978. While the painting is one of Rubens's lesser known works, it is considered important as it is part of a group of oil sketches by the German-born artist made in preparation for a series of larger paintings that decorated the ceiling of a Jesuit church in Antwerp destroyed by fire in the 18th century.

Central to the row over ownership was whether Gutmann had been forced to sell the painting because of antisemitism, as his descendants contend. The panel heard evidence that Gutmann's Dresdner Bank became "Nazified" and was encouraged to persecute Jewish employees. The panel report notes: "While there is no documentary record of Gutmann having owed any money to the Dresdner Bank before 1933, documents start recording money owed by Gutmann from this point onwards, beginning with a debt, reported in July 1933, of 200,000 reichsmarks owed to a Dresdner Bank share syndicate set up in 1927, in which Gutmann was a participant."

But the panel also heard that Gutmann had run up debts in connection with disastrous investments in Egyptian cotton futures that eroded his wealth. The Courtauld insisted that Gutmann sold his art collection because of these financial losses and that the decision to offload it was simply a "cold financial calculation", not because of antisemitism. The panel agreed and ruled that the moral strength of the claimants' case was insufficient to recommend transfer of the painting to the claimants or an ex gratia payment. A ruling against the Courtauld could have raised questions about the due diligence it conducted before accepting the work.

The decision closes another chapter on the tragic Gutmann family saga. Arrested by the SS in 1934, together with other members of centrist and rightwing parties, several of Gutmann's contemporaries were murdered on the orders of Hitler, who feared that they might support a coup against him. Gutmann had been a target of the Nazis even before they came to power, and was described by one of their propaganda posters as a "profiteer and a Jewish manipulator".

He fled to the UK in October 1936 and died there six years later. His brother and his wife, who remained in Germany, were murdered by the Nazis. Gutmann's remaining assets were seized by the Nazis in 1940.

Last year another of Gutmann's paintings, Hans Makart's The Death of Pappenheim, was returned to the family by a decision of Vienna municipal council.
http://www.guardian.co.uk/artanddesign/2010/dec/19/rubens-painting-kept-courtauld
© website copyright Central Registry 2021