Metropolitan Museum Sued for a Cezanne 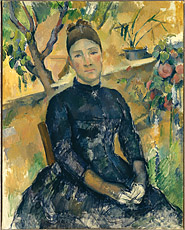 MANHATTAN (CN) - The great-grandson of a Russian art collector claims the Metropolitan Museum of Art is knowingly housing a stolen Cezanne painting that belongs to him. Pierre Konowaloff of Paris, France, claims Russia's Bolshevik regime looted the 1891 painting Madame Cezanne in the Conservatory, or Portrait of Madame Cezanne, from the home of his great-grandfather Ivan Morozov in 1918, after which it was unlawfully sold to an American collector, who willed it to the museum.

Konowaloff is Morozov's sole heir, he says in his federal complaint.

Morozov "was a wealthy Moscow textile merchant whose collection of modern art was among the finest in Europe before Work War I," according to the complaint.

Konowaloff says his great-grandfather bought the Cezanne painting in April 1911, 6 years before the Bolshevik revolution in Russia.

Morozov's collection was "singled out" by the Bolsheviks for confiscation, and in December 1918 they took the painting "by order of Lenin and Sovnarkom (the Council of People's Commissars)," Konowaloff says.

The Bolsheviks looted most of Morozov's belongings and turned his home into a state museum that housed the "entire art collection, including the Painting," Konowaloff claims.

"Morozov's home was occupied by Red Guard soldiers, and he and his family were forced to live in several rooms on one floor," according to the complaint. Konowaloff says his great-grandfather was never paid for the artwork, and did not voluntarily give up his collection.

The Bolsheviks destroyed "evidence of title and origin" for the art that they stole, "sometimes creating false ownership with new maker's marks," according to Konowaloff's 17-page complaint.

He claims the Bolsheviks used the Mattheisen Gallery in Berlin as the "main transit point for Soviet shipments of art for sale to the West," in order to "give the appearance of legitimacy to Soviet sales of looted art."

Matthiesen sent money to the Soviet government for the stolen artwork, then sent the paintings to the P. & D. Gallery in London, from which it was sent to the New York gallery Knoedler & Company, according to the complaint.

"These galleries handled the paintings on commission, normally 7.5 to 10%," Konowaloff says.

"Several wealthy American collectors, including Andrew Mellon ... Secretary of the Treasury under Herbert Hoover, acquired Bolshevik looted art on the black market," according to the complaint.

Stephen Clark of New York - an heir to the Singer sewing machine company - bought the Cezanne at issue in May 1933, knowing that it had been stolen, Konowaloff claims.

"Clark was a sophisticated art collector," who helped open the Museum of Modern Art, according to the complaint.

Konowaloff believes the MoMA's first director, Alfred Hamilton Barr Jr., identified the painting as stolen in 1929. Barr had visited the Museum of Modern Art in Moscow, and indicated in his diary "that he knew that at least part of the collection in this museum had belonged to Morozov," according to the complaint.

In 1933, Clark "directed Knoedler" to "secretly purchase the painting for him," despite protests from Soviet museum officials, Konowaloff says.

Clark paid around $260,000 for the Cezanne painting and three other masterpieces, "which was a bargain price even by 1933 standards," the complaint states.

Clark hung the painting in his home until he died in 1960, according to the complaint. Konowaloff claims Clark "did not acknowledge the Morozov provenance until 1954 and never made any effort to provide notice to Morozov or his heirs that he possessed the Painting, although such notice could have been easily provided as it was common knowledge that the Morozov and other Russian émigrés were living in Paris."

Clark willed the painting to the Metropolitan Museum of Art, which knew "that Clark's bequest involved looted art," though it did nothing to investigate the title or seek out Morozov's heirs and determine whether they were compensated or "had voluntarily given up any claims of title to the Painting," Konowaloff says.

The museum was aware that Clark and Knoedler had worked together to get the painting through Matthiesen, which had been flagged for selling looted artwork, the complaint states. In fact, "Matthiesen was listed as an organization 'involved in looting art' in the 1946 Final Report of the Art Looting Investigation Unit (ALIU) and the Office of Strategic Services (OSS)," according to the complaint.

When Konowaloff's father died in 2002, he became sole heir to his great-grandfather's collection, and "undertook an exhaustive effort to document and inventory the artworks," he says.

"Konowaloff's father had not undertaken such an inventory for a variety of reasons, including the well-founded belief that acting against Russia in connection with his grandfather's stolen art collection would subject him to danger and would be unavailing in terms of meaningful remedy available in Russia," the complaint states.

Clark purchased the artwork knowing that it was stolen, and since "Clark never acquired lawful title, he could not bequeath lawful title to the Museum," Konowaloff says.

He says he asked the museum to return the Cezanne painting, but it refused.

Konowaloff demands an injunction and damages for replevin and conversion, and wants the MoMA to hand over the painting.