MADRID— An underwater treasure. A looted Impressionist masterpiece. Diplomatic intrigue. Nazis. It all sounds like the plot of a Clive Cussler novel. But no, these are the components of the latest real-life revelation from the WikiLeaks cables. All these things collided in 2008, when diplomats were hunting for solutions to two very different cultural restitution cases and sought a clandestine compromise, according to the latest of the leaked dispatches highlighted by the Guardian.

On the one side, the Spanish were looking to reclaim the so-called "Black Swan" treasure, a $500 million trove of gold and silver coins discovered in the wreck of the Nuestra Señora de las Mercedes, a Spanish galleon that sank off the coast of Portugal in 1804 in a battle with four Royal Navy ships. Underwater robots from the Florida-based Odyssey Marine Exploration company discovered the sunken treasure in March 2007, and the company shipped the loot straight back to the United States, provoking anger in Spain, which claims the hoard as its own.

Along with descendants of 249 Spanish sailors who perished in the long-ago naval battle, the Spanish government took Odyssey to court in Atlanta, and won. However, the exploration company has appealed, claiming that the galleon was on a commercial mission and that Spain therefore does not have the right to the majority of the treasure.

On the other side is a tale from the darkest days of Nazi Germany, with the U.S. seeking to aid a Los Angeles-based Jewish family in recovering Camille Pissarro's "Rue St Honoré. Après-midi. Effet de Pluie" (1897), which currently hangs in Madrid's famous Thyssen-Bornemisza Museum. In 1939, Lilly Cassirer was forced to sell the picture by the Impressionist master for the equivalent of $360 to obtain an exit visa as she fled Germany. 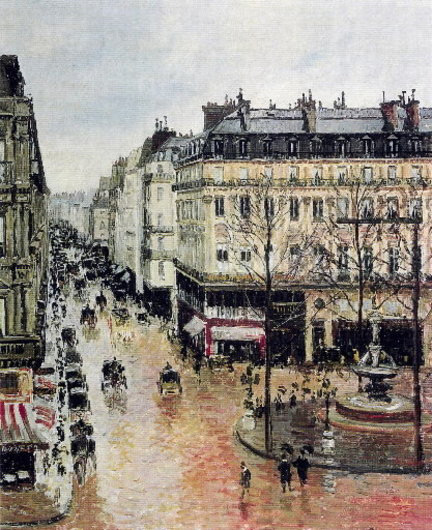 According to a summary of the situation in one WikiLeaks cable, "Baron Hans Heinrich Thyssen-Bornemisza acquired [the painting] in 1976. In the early 1990s, the Spanish government purchased the collection and built the current museum. In 1958, Mrs. Cassirer received a DM120,000 restitution payment for the disappearance and provisional dispossession of the painting, but retained full right to the painting." The Thyssen-Bornemisza has steadfastly refused to return the disputed Pissarro to Cassirer's heirs.

And that's where the "Black Swan" treasure comes in. Seeking to resolve the situation, U.S. ambassador Eduardo Aguirre apparently attempted to use the Odyssey dispute as a bargaining chip, offering to help in the return of the 17-ton coin hoard in exchange for help in getting Pissarro's delicate streetscape back to the Cassirers.

Spanish culture minister César Antonio Molina refused the gambit: "The minister listened carefully to the ambassador's message, but he put the accent on the separateness of the issues." Instead, he suggested that Spain could do some outreach to the Los Angeles Jewish community, including setting up a travel fund to promote cultural exchange.

Both the Spanish sailors and the Cassirer family continue their quests for their respective treasures.