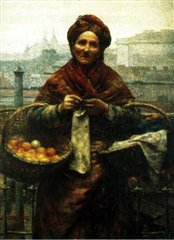 One of the masterpieces of Polish art, the Jewish Woman with Oranges by Aleksander Gierymski, stolen by the Nazis during WW II, has turned up at a small auction house in Hamburg.

The oil canvas was painted between 1880 - 1881 during the artists stay in Warsaw and was part of a cycle of work representing the life of poor Jewish inhabitants of in the Polish capital.

Polish state lawyers are now working on how to get the painting back into the country.

It is estimated that Poland lost around 20 billion dollars worth of art during Nazi occupation, or 43 percent of its entire cultural heritage.

The painting was valued at a mere 4,000 euro due to extensive damage. Its real value, however, is estimated at around 500,00 euros.