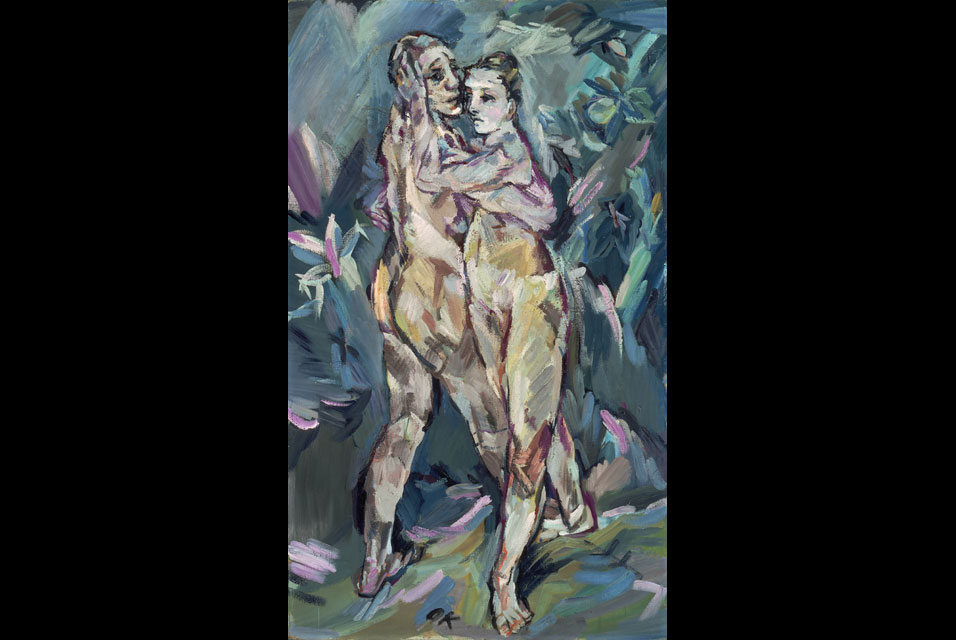 BOSTON, MA.- Yesterday, the United States Court of Appeals for the First Circuit issued its decision in the case determining ownership of Oskar Kokoschka’s painting Two Nudes (Lovers) (painted about 1913). The decision affirmed United States District Judge Rya Zobel’s May 28, 2009, ruling that the Museum of Fine Arts, Boston (MFA) is the rightful owner of the painting, and any claim to Two Nudes (Lovers) is time-barred.

While the case was resolved on statute of limitations grounds, it is important to note that the Court of Appeals’ opinion by Judge Kermit Lipez (joined by Judges Juan R. Torruella and Paul J. Barbadoro) agreed with Judge Zobel’s conclusion that the family of the original owner of the painting, Dr. Oskar Reichel of Vienna long knew that Dr, Reichel had sold the painting in 1939 to the Jewish art dealer Otto Kallir. Kallir then brought the painting to the United States. Family members did not assert a claim to Two Nudes (Lovers), as they did after World War II to other works of art Dr. Reichel had sold.

On May 28, 2009, United States District Judge Rya Zobel (District of Massachusetts) ruled that the Museum of Fine Arts, Boston (MFA), is entitled to retain ownership of Oskar Kokoschka’s painting Two Nudes (Lovers) (painted about 1913). The ruling came in a lawsuit filed by the MFA on January 22, 2008, in response to a request for restitution of the painting made by Dr. Claudia Seger-Thomschitz. In its January 2008 filing, the MFA asserted its rightful ownership of the painting, bequeathed to the Museum by Sarah Reed Blodgett in 1973. Dr. Seger-Thomschitz of Austria claims to be the heir of a son of Dr. Oskar Reichel. Dr. Reichel, a Jewish doctor and art collector in Vienna, purchased the painting from the artist in 1914 or 1915 and sold the work in 1939 to another Jew, Otto Kallir, a Viennese art dealer (who was then living in Paris). Based on exhaustive provenance research, the Museum concluded that the 1939 transaction was valid.

In her May 28, 2009 Memorandum of Decision and Order in Museum of Fine Arts, Boston v. Seger-Thomschitz, No. 08-10097-RWZ (D. Mass.), Judge Zobel ruled in favor of the Museum, holding that no claim to the painting could be made by Dr. Seger-Thomschitz. The Judge held that because Oskar Reichel’s family could have sought restitution of the painting decades ago (had they believed there was any reason to challenge the 1939 transaction), the applicable statute of limitations barred any claim now. Judge Zobel also held that Dr. Seger-Thomschitz herself waited too long to bring a claim after learning she might have rights to property previously owned by Oskar Reichel. Judge Zobel stated in her ruling that:

• "[A]lthough the Reichel family never claimed compensation for any of the Kokoschka works that had been transferred to Kallir for sale, it did claim restitution for artwork and property that had been stolen by the Nazis."

• "[T]he Reichel family never attempted to recover the painting after WWII, and there is no evidence that it believed the transfer was not legitimate."

• "The evidence is undisputed that the members of the Reichel family had sufficient knowledge of Reichel’s ownership and transfer of the painting."

• Dr. Seger-Thomschitz also "waited more than three years to assert her claim after she was on inquiry notice of her possible right to the Painting…The information necessary to pursue her claim was readily available to both [Dr. Seger-Thomschitz] and her counsel at that time."

• "[T]he delay in bringing suit will prejudice the MFA because all of the witnesses with actual knowledge of the transfer are deceased."

• Any claim by Dr. Seger-Thomschitz that Oskar Reichel was misled when he transferred the painting to Otto Kallir in 1939 was ―pure speculation."


Two Nudes (Lovers) is a self portrait of Austrian artist Oskar Kokoschka (1886–1980) and his lover, Alma Mahler (the widow of the great composer Gustav Mahler). The artist painted the work in Vienna, Austria, about 1913, then sold it around 1914–15 to Oskar Reichel, who lent the painting to numerous exhibitions. In the 1920s and 1930s, Reichel consigned Two Nudes (Lovers) for sale to Otto Kallir-Nirenstein (later known as Otto Kallir), on several occasions. Kallir was, at that time, the owner of the Neue Galerie in Vienna. In 1938, Kallir emigrated to Paris, where he opened the Galerie St. Etienne. In February 1939, Reichel transferred the painting—along with four other Kokoschka works—to Kallir, who later brought the paintings to the United States and sent money for them to Reichel’s two sons, Raimund and Hans, who were living in South America and the United States. According to the MFA’s extensive provenance research, there was no evidence that Two Nudes (Lovers) was confiscated or looted by the Nazis. In New York, Kallir opened a branch of his Paris gallery. He sold Two Nudes (Lovers) to another gallery in New York, after which the painting was bought by a third gallery there. The painting was then sold to Sarah Reed Blodgett (known later as Sarah Reed Platt) in late 1947 or early 1948. The MFA was given the painting in 1973 as a bequest from Blodgett’s estate. Since then, the work has been included in multiple publications and been on display almost continuously at the MFA (where it is currently on view in the Rabb Gallery).

Reichel died of natural causes in Vienna in 1943 at the age of 74. In June 1957, a Viennese lawyer representing Reichel’s son, Raimund Reichel, submitted an application to the Austrian authorities of the Fund for Assistance to Political Persecutees, on behalf of himself and his brother Hans. The application included a notarized statement by Raimund asserting that ―a large art collection [owned by my father] was sold by force: 47 pictures by the painter Anton Romako.‖ Raimund never asserted a claim concerning any painting by Kokoschka, including Two Nudes (Lovers), or otherwise sought to invalidate the transfer of the painting to Kallir. Raimund died in Vienna in 1997. In March 2007, more than 68 years after the sale of the painting by Reichel, Dr. Seger-Thomschitz, of Vienna, identified by her counsel as a non-relative ―select niece‖ of Raimund Reichel, made a claim of restitution against the Museum.

Following this March 2007 claim, the MFA thoroughly reviewed the claim to Two Nudes (Lovers) in accordance with its own Acquisitions Policy as well as the guidelines set forth by the American Association of Museums (AAM), the Association of Art Museum Directors (AAMD), and the Washington Principles of 1998 on Nazi-Confiscated Art. The Museum is committed to determining, on an ongoing basis, whether any work of art in its collection has ever been stolen, confiscated, looted, or otherwise unlawfully appropriated as a result of Nazi persecution without subsequent restitution. A leader in provenance research, the MFA makes ownership information available to the public through its website, mfa.org. During the past decade, the Museum has restituted a number of works of art to their rightful owners based on provenance research.