Christian Ude, the mayor of Munich, rejected a German government panel’s offer to examine a claim by the heirs of the pre-World-War-II owner for a painting by Paul Klee that was stolen by the Nazis.

A government commission headed by former Constitutional Court judge Jutta Limbach wrote to Ude in June, offering to mediate a dispute over “Sumpflegende” (Swamp Legend). The painting, which hangs in the city’s Lenbachhaus museum and is insured for 4 million euros ($5.1 million), is claimed by three grandchildren of Sophie Lissitzky-Kueppers, a German art historian who emigrated to the Soviet Union in 1927.

Munich’s refusal to cooperate is a blow for the Limbach Commission, which was set up by Culture Minister Bernd Neumann in 2003 to make recommendations on disputed artworks lost by their owners in the Nazi era and now in public collections. The panel, which can only mediate if both sides of a dispute allow, has ruled on just four cases since it was founded.

“The commission’s options are exhausted,” said Michael Franz, the head of the Magdeburg coordination post that serves as the panel’s head office. 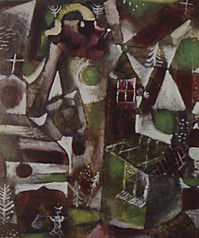 "Sumpflegende" (Swamp Legend) by Paul Klee. The work was seized by the Nazis in 1937. The picture, which now hangs in Munich's Lenbachhaus, is claimed by the heirs of its prewar owner, a German art historian who emigrated to the Soviet Union. Source: Monika Tatzkow via Bloomberg

The basis for the panel’s recommendations is an international accord known as the Washington Principles, endorsed by 44 countries in 1998. Under those non-binding principles, countries pledged to restitute or reach a settlement with the heirs on Nazi-looted art in public collections.

German Culture Minister Bernd Neumann wrote to Ude in 2009, proposing that the panel should rule on the case. A spokesman for Neumann, who declined to be identified by name, said yesterday that the minister’s position hasn’t changed.

“I have been watching with increasing concern recent reports on the discussion that has been going on for years about a possible restitution of Paul Klee’s ‘Sumpflegende,’” Neumann said in the letter. “I think the moral authority of the advisory commission would be a good basis for a pragmatic conclusion.”

Lissitzky-Kueppers inherited “Sumpflegende” in 1922. She loaned it and 15 other works to Hanover’s Provinzialmuseum in 1926, shortly before she left Germany. She emigrated to Moscow to join the Russian artist El Lissitzky, whom she married, according to the book “Lost Pictures, Lost Lives” by Melissa Mueller and Monika Tatzkow.

Adolf Hitler, center, and other Nazi officials visit the ``Degenerate Art" exhibition in Berlin, Germany, on July 16, 1937. Berlin's Free University has compiled a new Internet database of the fate of more than 21,000 artworks seized by the Nazis from German museums. Source: Free University via Bloomberg

The painting was seized from the Hanover museum in 1937, under the orders of Hitler’s propaganda minister Joseph Goebbels, for the Nazi exhibition of “Degenerate Art” in Munich.

Stefan Hauf, a spokesman for Ude, said Munich sees no reason to review its position on the Klee painting. Ude has argued that works stolen for the Nazi exhibition are not covered by the Washington Principles. He also said German law prohibits local authorities from giving away property.

“The city council has already given its final verdict on this,” Hauf said by telephone yesterday.

The Nazis seized thousands of modern works from museums for the show with the aim of ridding them of art they saw as contrary to Aryan ideals. “Swamp Legend” was mocked as the “confusion” and “disorder” of a “mentally ill person.” The Nazis sold it in 1941.

Several changes of ownership later, the picture was acquired by Munich and the Gabriele Muenter Foundation in 1982. It has hung in the city’s Lenbachhaus since then.

Lissitzky-Kueppers, who was banished to Siberia by Stalin as a German living in the Soviet Union during the war, failed to recover her paintings. She died in penury in Novosibirsk in 1978.

“We are not withdrawing our application to the panel and are hoping Mr. Ude changes his mind,” said von Berg. “If there is no other alternative, we will have to file suit. We are discussing whether to do that in Germany or the U.S.”