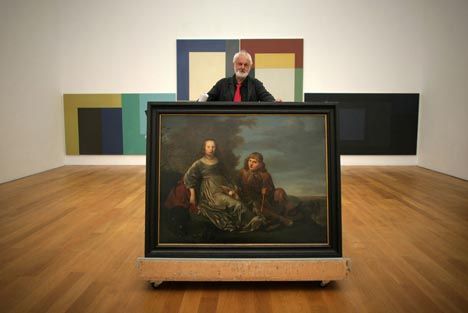 Director of the Museum Wiesbaden, Dr. Volker Rattemeyer with "Double Portrait of a Young Couple" by Dutch painter Pieter de Grebber, which is being returned to the heirs of Berliner art dealer Jakob Oppenheimer (Photo: EPA)

The Museum Wiesbaden has returned a 17th-century painting confiscated by Nazis in the 1930s to the heirs of its rightful owners. Double Portrait of a Young Couple by Dutch painter Pieter de Grebber (1600-1653) once belonged to the Jewish art dealer Jakob Oppenheimer and his wife Rosa.

After the museum identified the origin of the painting in March 2010, the Hessian Ministry of Economics agreed for the museum to give back the work of art. On 10 August, the painting was finally returned to its owners.

“We have to face the injustice caused by the Nazi regime”, Volker Rattemeyer, the director of the museum said at a ceremony to mark the handing over of the work. Paris-baed lawyer Eva Sterzing received the painting on behalf of Oppenheimer's heirs. “The heirs appreciate that injustice is being recognised”, said Sterzing.

However, the future of the painting remains uncertain, as neither of the Oppenheimer descendants have the means to pay off the other heirs.