A cache of art stolen at the end of World War II is finally back where it belongs, after a 65-year odyssey featuring a transatlantic smuggling, a secret hideaway and - in the end - a little browsing on the Internet.

It was last possessed by Beth Ann McFadden of Cornelius who, while growing up in New Jersey, heard about the war booty her great uncle kept hidden behind a false wall panel in his basement.

"It was kind of a family secret," says McFadden, 45, a legal assistant. "We weren't supposed to talk about it."

After her great uncle, Harry Gursky, died in 1988, the 11 paintings - limp canvases removed from their frames - went to McFadden's parents. Her mother kept them in a closet, unaware of whether they had any value.

And after they died, the artwork went to McFadden's sister in West Windsor, N.J., who kept them in her basement. In November, when the sister was moving, the paintings came to McFadden.

She didn't know whether they were important. A family friend, Barry Pedersen, and his partner in their Mooresville architectural millwork company, Gary Dunne, both of Davidson, offered to help find out.

After hours of research on the Internet, they found the paintings were important - they had been missing more than six decades, and the FBI and Customs had been searching for them for years. 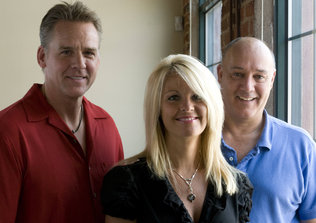 An odyssey of art

Heinrich Buerkel (1802-1869) is not a well-known painter, but his 19th-century landscapes are popular in his hometown of Pirmasens, Germany, near the French border.

There, since 1925, the Museum of Pirmasens displayed a collection of his works. But in 1942, during the Allied bombing of the manufacturing city, the museum's paintings - 18 by Buerkel and oil portraits by other artists - were hidden in the basement of a school that served as a bomb shelter.

On March 22, 1945, U.S. troops occupied Pirmasens and on Sept. 19 the museum announced that "about 50 paintings which had been stored in the air-raid shelter at Husterhoh School during the war have been lost during the arrival of the American troops."

For 60 years, the paintings were missing. Then on Oct. 25, 2005, an auction company in Pennsylvania advertised three of them.

Spotting the sale on the Internet, an archivist at the Museum of Pirmasens notified German authorities, who contacted the FBI, who seized the works.

They were told by the woman who was trying to sell them that they were given to her by Gursky's wife, Florence, years ago. That case is still under investigation, the U.S. Attorney's office says.

On McFadden's behalf, Dunne sent an e-mail to Pirmasens' mayor, Bernard Matheis, a few days before Christmas asking whether the city would like the paintings back.

"I didn't know until now that Santa Claus had a main office in Davidson, N.C., USA," Matheis wrote back.

Dunne also contacted federal authorities, who put him in touch with Bonnie Goldblatt, a New York-based agent for Immigration and Customs Enforcement. Goldblatt had been working on the case for three years. Goldblatt asked that McFadden call her, but McFadden - a little worried that she might be in trouble - didn't call right away.

"Maybe I've seen too many 'Judge Judy's," she says.

They did connect, and in February, McFadden flew to New York to turn over the canvases.

This month, McFadden, Pedersen and Dunne were invited back to New York. At a ceremony at the Goethe-Institut in Manhattan with federal authorities and German Consul General Horst Freitag, the paintings were formally returned.

"It is thanks to your integrity, foresight, your firm belief in justice and your joint effort with ICE that these paintings could be traced and now returned," Freitag told McFadden.

"There are still dozens of these paintings missing from Pirmasens," said James Hayes, ICE special agent in charge. "We hope that this example will prompt others who might have 'mystery' paintings in the family to bring them to ICE."

Looting in the war

As the Nazis moved across Europe in World War II, they systematically looted an estimated 20 percent of the continent's artwork. German dictator Adolf Hitler chose the best for himself and other high-ranking officials amassed collections as well - Hermann Göring took 594 pieces for himself in Paris alone.

But art thefts by U.S. servicemen were all but unknown. Charles Mo, director of fine arts for the Mint Museum, says he's never heard of a single case, while the plunder of the Nazis was well documented.

McFadden says she never had any interest in making money off the works.

"They didn't belong to me and were of sentimental value to someone else. I wouldn't want anyone else to take my stuff."