The Warburg Institute is fighting for its life 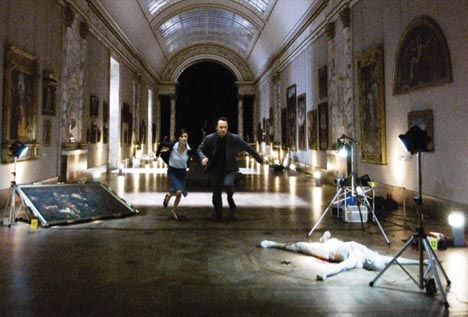 Millions have been misled by the Da Vinci Code about Leonardo's Last Supper, Mary Magdalen, and the Holy Grail. The more complex and difficult truths about them can be found in the Warburg library (Photo by Simon Mein/Columbia Pictures)

The trust deed is barely more than a page long and because it is November 1944 and paper is scarce, a typing error has frugally been corrected by hand and initialled in the margin. The act being recorded, however, is generous and illuminated and proves that the British Establishment could think big even in such straitened times. The Warburg family is to give the Warburg Library’s 80,000 books and photo archive to the University of London. For its part, the University recognises “the world wide reputation in its special field of culture and research which the Warburg Library has already established”, accepts the offer and will “maintain and preserve the Warburg Library in perpetuity, provide it with a suitable building near the university centre and keep it adequately equipped and staffed”. It also agrees to be advised in its control of the Warburg by a Committee of Management made up of “persons of goodwill whose interests lie in the direction of the fields of study and research to which the Warburg is dedicated”.

The Warburg Library (to become the Institute) and staff had fled the Nazis in 1933, having already created a completely new area of study, the history of ideas, how people saw things and thought about them in the past.

It began with Aby Warburg of the Hamburg banking family, who used his money to develop a revolutionary way of looking at philosophy, science and art that excluded nothing: not astrology, nor alchemy, nor fortune-telling, nor magic nor any of the aspects of the past that modernity had relegated to the bin of intellectual dead-ends. The motto over his library was simply “Mnemosyne”, memory.

One of Aby Warburg’s first studies was to explain the iconography of the Renaissance paintings at the palace of Schifanoia in Ferrara, which are all to do with astrology. This was much more profound than Bernard Berenson’s taxonomic approach (so-and-so painted this at such-and-such a time) because it gave the viewer the key to a work of art’s meaning. But Warburg was not primarily an art historian; rather, he believed in studying the transmission of ideas in all fields. He was also convinced that to understand our own past we needed to know about other cultures, and not just those considered as “civilised” as ourselves. He went to Arizona in the late 19th century to compare the rituals of the Hopi Indians with Renaissance ritual, an approach that was quite exceptional at the time.

He collected books and photographs and arranged and rearranged them according to his ideas of how a library could aid creativity by virtue of the “good neighbourliness” of books: that if you went to a shelf for one book, there should be related subjects close by, so that you were led spontaneously into making new connections. Thus, in the Warburg Institute’s library today, books on secret codes are near emblem books, books on heraldry, the art of memory and short hand.

Aby Warburg died in 1929, having spent the last years of his life in a clinic, suffering from depression, but his four-storey library in Hamburg, with its oval reading room and 28 telephones (he was a technophile), became the hub for a group of scholars whose influence lasts to this day.

The Austrian, Fritz Saxl, was Warburg’s closest collaborator and first director of the Warburg Library. He showed the importance of the worship of the god Mithras in late classicism, and together with Erwin Panofsky explained the origins and meaning of Dürer’s famous print, Melancholia I. He was also a key figure in getting the library to Britain. Erwin Panofsky was another Warburgian who fled Germany, to the ultimate advantage of Princeton. His most famous work is Studies in Iconology (1939), which showed how to look for the intentional meaning of art hidden in the narrative or in symbolic form. Someone who enjoyed disagreeing with Panofsky over some of his more abstruse interpretations was Sir Ernst Gombrich, the most widely known of the Warburgians because of his Story of Art, published in more than 30 languages. His key contribution was to link art and psychology in Art and Illusion (1960).

Rudolf Wittkower, at the Warburg and then Columbia, shaped at least two generations of architectural historians in the US and Europe. His most famous book, Architectural Principles in the Age of Humanism (1949) studied how the buildings of Palladio based their proportions on harmonic musical ratios. Dame Frances Yates, who taught for many years at the Warburg, revealed how magic was intrinsic to the development of early modern science and philosophy, and how gnosticism and hermeticism survived from the late classical world through the Middle Ages and emerged again with a small but influential number of Renaissance thinkers.

There were and are many other Warburgians, but this is enough to show how fortunate it was for Britain that the textile magnate and collector Samuel Courtauld—the founder-benefactor of the Courtauld Institute—and the politically influential collector Lord Lee of Fareham—who gave Chequers to be the country seat of the prime minister—appreciated the originality and importance of the Warburg Library and enabled it to come to London, where it has been a world famous part of London University to the present day. In Germany, regret for what had been lost was so great that the historian Martin Warnke raised DM6m to buy back the original Warburg Library building, which in 1995 reopened as an institute for the study of political iconography, an evolution of Aby Warburg’s original ideas.

So why is the Warburg fighting for its life against London University? Underlying the conflict is the University’s shrunken role since the big foundations such as University College and Imperial College went independent. This left their former governing body impoverished and without much to govern except its own library and bodies such as the Institute of Classical Studies, the Institute of Advanced Legal Studies and the Warburg, united in 1994 with others under the name of the School of Advanced Study.

There are now fears that the University plans to move the Warburg’s library from its building in Woburn Square and put it with its own library in its headquarters. In 2007 it squeezed the Warburg by raising its space charge by £500,000, which eats up half the Institute’s £1.3m annual grant so that it now has an annual deficit of half a million. Jill Kraye, the Institute’s librarian and a historian of philosophy, says, “They charge us eight times more for being an open access library”, and yet the whole point of Aby Warburg’s original conception was to be able to browse among the books.

The University is also trying to curtail the Warburg’s independence after “converging” the administration of the Warburg library into London Research Library Services, which will be appointing the Warburg’s next librarian, who will no longer be a scholar-librarian, as has been the case from Fritz Saxl onwards. There is no money to appoint a successor to the head of the Warburg’s photographic archive, the essential complement to the books in the integrated Warburgian approach to ideas. Currently, its head is Liz McGrath, the award-winning author of Rubens, Subjects from History.

Another sign of the Warburg’s diminished independence is that the Institute itself was not represented on the board to appoint the successor to the current director, Charles Hope, although a descendant of the Warburg family was included. At this rate, there could soon be nothing left of the Warburg except a few Fellows detached from the library that not only gave birth to the Institute but is at the heart of what makes it such an influential and civilising place.

All this suggests that the University does not acknowledge its obligations under the 1944 trust deed, but what is almost more serious is that in its bureaucratic way the University seems to have lost sight of the human reality of what makes a place of learning and intellectual creativity. Administrative synergies will not do it; money and a fine building do not necessarily do it, as the Getty Research Institute has shown. Despite all its facilities, that has never stirred people’s minds much or aroused affection.

The Warburg, on the other hand, attracts scholars from all over the world and from many fields. They congregate around its books, each floor with its own theme: basement and first floor, Image; second floor, Word; third floor, Orientation; fourth floor, Action. Action, for example, embraces social history, political history, magic and science, while Orientation is western and eastern religion and philosophy. Ideas seem very accessible, almost tangible here. Scholars—and this can include non-academics if they write to Jill Kraye and show good reason why they need to use the library—work in the book stacks, where there are desks and natural light. The archaeologist Salvatore Settis, until recently head of the elite Scuola Normale Superiore of Pisa and one of the most influential figures on the Italian cultural scene, says that he used to spend at least a month a year here and now he sends his most talented post-graduates to the Warburg to broaden their minds.

What should happen now

Instead of this sad and unedifying state of conflict, the University could cut the charge to the Warburg, recognise its own obligations and the Warburg’s unique characteristics, and collaborate with the Institute on a long-term plan for its future in its own building. This certainty would make it possible for the Warburg to launch an international search for the endowment funding that would enable it to carry on its extraordinary work.

The alternative looks increasingly unattractive. The Warburg, supported by its Advisory Council, has taken legal advice and has been told that the University is in breach of the 1944 trust deed, but the University wants to apply to the Charity Commissioners to amend the terms of the deed. Director Charles Hope points out that if they succeed in this, it would not only be the death of the Institute, but also of the library, half of whose acquisitions currently come through the Warburg’s endowment income, gifts and exchanges (for example, the De Menil family gave it 30 years worth of material about the “image of the black” in art).

The Warburg family is getting angry. Max Warburg, the banker son of Eric Warburg, who signed the 1944 trust deed making the donation, told the Neue Zürcher Zeitung last month that the family would do everything possible in law to compel the University to honour the trust deed, which guarantees the Warburg’s independence and independent financing. “The whole thing is a scandal,” he said.