The Hamburg auction house Hauswedell & Nolte sold a Max Liebermann sketch that was in the artist’s possession at his death, after receiving a claim that the drawing was probably seized by the Nazis or sold under duress. 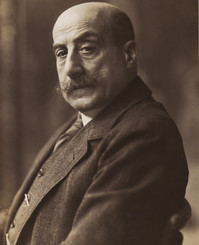 German artist Max Liebermann. The Hamburg auction house Hauswedell & Nolte sold a Liebermann sketch that was in the artist's possession at his death in 1935, dismissing his heirs' warnings that the drawing was probably seized by the Nazis or sold under duress. Source: Max Liebermann Stiftung via Bloomberg

The drawing, a study for a painting of boys bathing in the sea, fetched 4,500 euros ($5,575) at auction, according to Hauswedell & Nolte’s website. Georg Castell of WilmerHale in Berlin, the lawyer representing Liebermann’s two great- granddaughters, had written to the auction house two days earlier saying that his clients were opposed to the sale before the provenance of the sketch was examined.

“I would never have imagined that a German auction house would act like that in such a case,” Castell said in his Berlin office. “I find it scandalous.”

The drawing is one of several thousand works on paper from Liebermann’s estate that Castell and the heirs are trying to trace. An impressionist painter, Liebermann was the honorary president of the Prussian Academy of Art before being forced to resign under Nazi rule because of his Jewish ancestry in 1933. He died in 1935, leaving everything to his widow.

That year, together with her husband’s biographer, Martha Liebermann stamped all the unsigned paintings, pastels and drawings by the artist in her possession, the Liebermann collection heirs say. Under postwar laws crafted by the western allies, and later West German laws, any art sales by Jews after 1935 are presumed to be made under duress, and can be subject to restitution claims.

Martha was later forced to give up her homes and sold artworks to pay the rent and buy food and medicine. She ended her own life with an overdose in 1943 to avoid being deported to a concentration camp. Whatever art remained in her apartment after her death was seized by the Nazis.

Ernst Nolte, the owner of Hauswedell & Nolte, described the letter from the heirs’ lawyer as “completely groundless.” He said in a telephone interview that the consignor of the drawing proved her legal ownership before the sale. The only provenance given in the catalog for the sale was “a Hamburg private collection.”

“There is no proof that the drawing was looted,” Nolte said. “One can assume lots of things, but it can’t be proven. We think we acted absolutely correctly.”

Under German law, the statute of limitations for property claims expires after 30 years. The theft victim has no legal recourse beyond that period, particularly if the purchaser can prove that he bought the items in good faith.

“Legally speaking, there is not much we can do -- the statutes have expired,” Castell said. “Private people cannot be held to national accords like the Washington Principles.”

In 1998, 44 countries including Germany endorsed the non- binding Washington Principles, pledging to restitute or reach a settlement with the heirs regarding art in public collections that was looted by the Nazis or sold under duress, and to carry out provenance research in museums.

In a follow-up declaration agreed in the Czech Republic last year, 46 states said that they would encourage private institutions and individuals to apply those principles as well.

There have been other incidents of German auction houses selling disputed art works. The Cologne company Kunsthaus Lempertz sold an Italian baroque painting to New York dealer Richard Feigen in 2000. After it emerged last year that the painting had been auctioned -- also by Lempertz -- in a Nazi- forced sale in 1937, Feigen returned it to the heirs of Max Stern, a Jewish gallery owner who fled prewar Germany.

Castell informed Hauswedell & Nolte that he is registering the sketch with Lost Art, a German government database of stolen and missing art. The auction house’s lawyers, Heuking Kuehn Lueer Wojtek of Hamburg, responded to say they had informed the drawing’s new owner that he can file suit for damages resulting from the listing. The auction house didn’t name either the consignor or the buyer.