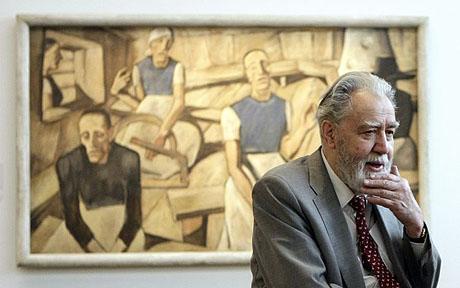 Rudolf Leopold, who died on Tuesday aged 85, was one of the most successful art collectors of modern times; his single-mindedness was crucial in bringing the hitherto unknown artist Egon Schiele to global attention, but it also exposed him to accusations that he had knowingly acquired art looted from Jews by the Nazis.

Leopold's dedication and ruthlessness in pursuit of his chosen works marked him out even in a business stiff with the dedicated and ruthless. Admirers and critics alike noted his obsession with tracking down and acquiring great pieces of fin-de-siècle Viennese art. Even friends admitted that Leopold had an "insatiable greed" for art.

"An inveterate collector like Leopold can never assuage his hunger, because a collection can never reach the unattainable state of completeness," wrote one.

Driven by this hunger, Leopold stopped at nothing to secure the next canvas, watercolour, piece of furniture, sculpture or objet d'art. But his overriding passion was for Schiele, an artist who had died, more or less in obscurity, during the flu epidemic of 1918.

Schiele's sister, Melanie Schuster, was one of several people who felt they had been somehow tricked by Leopold. She claimed that he had persuaded her to swap watercolours for less valuable oils and conned her into signing a receipt by presenting it as a loan document. She sued, successfully, and Leopold was forced to return 60 works.

Owners of works coveted by Leopold seemed incapable of repelling his advances. "He doesn't accept no for an answer," said Wolfgang Fischer, a Viennese dealer who spent decades competing with him. Fischer recalled one occasion when a woman refused to accept Leopold's price and left for the theatre. When she returned late that night he was on a stool in front of her house.

When both Leopold and Fischer were pursuing a collection belonging to a woman based in Australia, Fischer called the woman to see if his bid had been accepted. Her son answered the phone and told him it had not. The "son" turned out to be Leopold, who had flown to Australia and acquired the works for himself.

Leopold's tactics eventually helped him secure a collection worth more than half a billion dollars, now housed in the Leopold museum in Vienna. But while Leopold-watchers and the legal community continue to argue about the probity of his methods, most are united in the view that he did not do it for the money.

"I got into a lot of debt," he conceded of his early collecting sprees. "I always got into debt if there was something important to acquire because I couldn't let it go." He insisted that Schiele was worth it: "He [Schiele] touches everyone with his themes: love, our loneliness, our fear of death, all his eroticism."

Indeed, such was the collector's affinity with the artist that on several occasions he suggested that he was Schiele reincarnated.

Rudolf Leopold was born on March 1 1925 in Vienna and trained to be a doctor. A spokesman for the Leopold museum has said that Rudolf spent the war avoiding conscription by hiding out in an Austrian mountain village. He qualified in 1953, going on to practise as an ophthalmologist. But already his interest had been diverted elsewhere.

His crucial awakening came, he related, in 1947, when he first visited Vienna's Kunsthistorisches museum. Awed by the pictures, Leopold decided to acquire some of his own. "That was one of the most important days in my life. What I saw that day had an unbelievable impact on me. I decided to collect."

Leopold also said that during the visit he discovered he had an exceptional eye for art. "I have this talent for observing for hours. The secret of my success," he revealed later, "is that I have the brain of the art history professor and the eye of a painter."

By 1950 Leopold had bought a rare catalogue of the work of Egon Schiele, then an unfashionable, even derided, artist. "Those pictures told me there could be modern artists of the same rank as the old masters, both in composition and in technique. But the difference was that they were our thing, current, they spoke to our time. I decided then and there to collect Schiele. That was lucky because he was not well-known enough and was also very cheap."

He began to live a double life – making money as a doctor and spending it all, and more, as an art collector. Works now worth hundreds of thousands, he bought for as little as £10 or £20.

According to Leopold's wife, Elisabeth: "Heirs were selling, an Austrian émigré in London was parting from the Hermits [one of Schiele's most celebrated works], a nephew of Schiele was selling a painting hidden behind a cupboard, unaware of its value."

But some of those whose works ended up with Leopold claimed to have been well aware of the value of their possessions. Leopold had tracked Hermits, for example, to Arthur Stemmer, a Jew who had fled Austria for London. "Leopold was quite persistent... and Stemmer felt the price was low, even acknowledging the fact that Schiele was hardly known outside Austria in those days. But he had no choice, because the money was needed," said one of Stemmer's relatives.

Inevitably, given that he embarked on his buying spree almost immediately after the war, Leopold later faced accusations that he had acquired works once owned by Jews who had either perished in the Holocaust, or who had fled abroad.

Doubts over provenance came to a head in 1997, when two Schiele pictures on loan to the Museum of Modern Art in New York were claimed by Jewish families. One, Dead City III, was eventually returned to the Leopold Museum, though a legal battle for ownership is still under way. A trial to determine whether Leopold knew that the other, Portrait of Wally, was stolen, is due to open in Manhattan later this month.

In 2008 a law professor commissioned by Austrian Jews found that at least 11 of the Leopold Museum's works belonged to people persecuted by the Nazis, and that Leopold certainly knew that they might have been looted. Leopold always insisted that his collection was assembled legally: "I'm not a Nazi and I'm not a Nazi profiteer."

In 1994 Leopold and the Austrian government formed a public foundation. Leopold's 5,266-piece collection was effectively sold to the nation for a third of its value. In return, the Austrian state built a museum in which to house it. Leopold was named director for life.

Apart from staging numerous Schiele exhibitions, over which he reputedly demanded unprecedented control, Leopold published, in 1972, a catalogue of the artist's work. In 1997 he was awarded the Cross of Honour for Art and Science, First Class.

Despite his wealth, he lived for decades in the same house in the northern Viennese suburb of Grinzing. Unremarkable from the outside, it was a treasure trove within, with every surface covered with artworks and collectables, from the inevitable Schiele canvases to antique German beer jugs.

Rudolf Leopold is survived by his wife and two sons and a daughter. Even after selling to the state in 1994, he continued to collect with vigour, perhaps even greater than before. "Everything I buy now," he said, "and that's a lot – that belongs to me."