Rome wants back the 3,000-year-old Etruscan artefacts that came into the hands of a dealer – but ministers aim to sell them 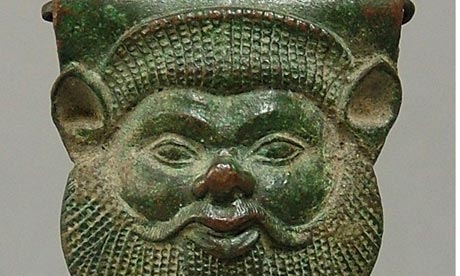 An Etruscan bronze mask of Acheloos that is among the items that belonged to Robin Symes. The Italians say it is a vital part of their heritage

Ministers have been condemned for forcing through the sale of up to 1,000 antiquities allegedly stolen from Italy, in order to pay the debts of a bankrupt private collector.

The Home Office has sparked outrage by allowing Roman bronzes, Etruscan gold and other treasures to be placed on the market by liquidators acting for the government in an attempt to recover unpaid taxes from the former owner, Robin Symes, a dealer with alleged links to the smuggling trade and a UK prison record.

Lord Renfrew, a Cambridge archaeologist, described the handling of the case as a "scandal" and called for action to end London's reputation as "a clearing-house for looted antiquities".

The controversy comes after officials from 20 countries met last week in Egypt to discuss how to recover ancient treasures that may have been stolen or looted. Britain has been involved in long disputes with Egypt and Greece over artefacts held in the British Museum.

In documents seen by the Observer, Paolo Giorgio Ferri, the relevant prosecutor in Rome, has repeatedly asked Britain to return the Symes antiquities to their "rightful owner". The UK government has caused fury by stating that the antiquities could instead be bought.

Symes's collection includes objects dating back 3,000 years, which Rome says form a vital part of Italian heritage. Ferri said: "It's like the Italian government making a profit from the mafia selling drugs."

Renfrew said: "These illicitly exported objects are being sold to pay Robin Symes's debts, which means that they are being sold for the benefit of the British government. This does reflect unfavourably on the British Treasury and Revenue and Customs, as they are encouraging the sale of material that the Italians say is looted.

"Many of the antiquities are Etruscan and could only have been found in Italy. They left Italy illegally because they would require an export licence. I can't see how the Home Office can dispute that."

The Italians said that requests to the Home Office asking for details on how the antiquities arrived in Britain, which must be given under international law, have been frustrated by "unhelpful", delaying responses. For its part, the Home Office has asked Italy for evidence that the artefacts "were in fact stolen".

The Symes treasures include Etruscan gold and amber necklaces, lead figures of warriors and a bronze mask of Acheloos, a river deity. There is also an Attic cup decorated with dolphins and a Roman bronze statuette of a bull. Many are still soil-encrusted, a sign of recent illegal digs, according to the Italians. Some belong to important known pieces in Italy and offer "evidence" of smuggling. One of the fragments with the liquidators comes from a looted vase that has been returned to Italy by the Getty Museum – "an absurd situation", as they belong together, Ferri said.

Fabio Isman, an Italian authority on looted art, said: "These objects were excavated illegally and are now being sold. It's terrible – terrible for culture and for the country from where the objects came. It's a scandal."

A controversial figure, Symes built up a dealing company once valued at £125m. Selling antiquities to collectors and museums, including the Getty in Los Angeles, he lived a life of luxury. He went bankrupt after a legal dispute with the family of his late business partner. Aged 65, Symes was sentenced to two years in prison in 2005 by a high court judge.

The liquidator, BDO Stoy Hayward, declined to comment. A Home Office spokesman said its policy is "to neither confirm nor deny the existence of a request to the UK, or to comment [on it]".