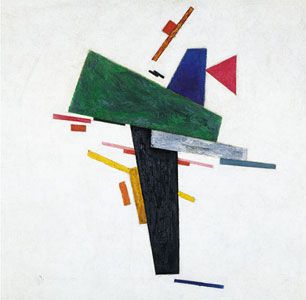 
NEW YORK—Ending a dispute that dates back more than 80 years, the Guggenheim Museum announced today that it had resolved the ownership of a painting by Kazimir Malevich, which the artist’s heirs claimed had been illegally obtained in the museum. A joint statement issues by the parties declared “an amicable settlement,” though details of the resolution remain confidential.

The untitled, abstract painting, which was produced by the Suprematist artist around 1916, was shown in an exhibition of Malevich’s work in 1927 in Berlin. When Malevich was forced suddenly to return to the Soviet Union, he left the work in the care of friends, though he failed to reclaim it before his death in 1935.

The Malevich heirs have worked to aggressively reclaim ownership of work they believe was improperly obtained by museums. In 2008, they settled their claims over four works in the possession of the city of Amsterdam. Those works, as well as the untitled painting whose title was resolved today, will be included in an exhibition entitled “Malevich in Focus: 1912–22,” which opens at the Guggenheim on February 19, 2010.