Masterpiece saved from Nazis in 1938 to sell alongside key works by Cézanne and Giacometti. 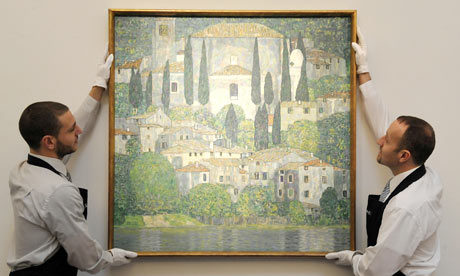 Gustav Klimt's Church in Cassone (Landscape with Cypresses) is conservatively valued at between £15m and £18m in the 3 February auction. Photograph: Carl De Souza/AFP/Getty Images

A rare and luminously beautiful landscape by Gustav Klimt that was crated up by its owners during the Nazi annexation of Austria in 1938 and then more or less disappeared for decades is to be auctioned in London, Sotheby's announced today.

The painting – which represents a key turning point for the artist – is being sold in what the auction house says is one of the most eye-catching sales of impressionist and modern art it has ever held. As well as the Klimt, conservatively valued at £15m-£18m, there is a quintessential Cézanne still life estimated at £10m-£15m and a similarly valued Giacometti life-size sculpture. It will be the first London sale of its type to include a trio of £10m-plus masterpieces.

All three were today displayed at the auction house's London headquarters; but it was the gorgeousness of the Klimt that was turning heads.

"It is absolutely wonderful," said Sotheby's specialist Patrick Legant. "It's a dream in a way to be so privileged to handle a painting like this."

But it is the story it tells – of Klimt and Vienna as well as the tragic story of its owners – that makes the painting so special. "In one painting you get some of the history of the 20th century," said Legant.

Klimt painted Church in Cassone – Landscape with Cypresses while he was on holiday in Italy with his lover and muse Emilie Klöge in 1913. The picture postcard village on the edge of Lake Garda, with its dominating church and ramrod cypress trees, clearly caught the artist's eye, but the nearest point he could paint it from was too far away – so he used a telescope.

The painting represents a key moment in Klimt's artistic journey, the point where he began embracing the modernist influences that were swirling, ever louder, around Europe. So while you can see the influence of the impressionists and Monet – just look at the reflections in the water – the new influences also loom large, people such as his friend Egon Schiele and the Cubists.

Legant said: "When you think of all the earlier Klimt landscapes you have the beautiful meadows, lots of flowers, all very playful. This picture is one of the first that shows a much more modern style – it's very geometrical and architectural, and that's something you wouldn't have found in his earlier pictures. This painting reflects the change in approach to art, an absolutely new way of approaching landscapes."

It was owned by one of Klimt's most important patrons, the Austro-Hungarian steel magnate Viktor Zuckerkandl and his wife Paula. After they died childless in 1927 it passed into the hands of Zuckerkandl's sister Amelie Redlich, where it occupied pride of place in the family's grand Vienna home.

Everything changed with the Anschluss in 1938. Redlich had arranged for her paintings to be stored by a shipping company, even paying what was an enormous bribe of 2,000 Reichsmarks for them to be kept safe and away from the Nazis.

In 1941 the story takes a depressingly predictable turn: Redlich and her daughter Mathilde were deported by the Nazis to Lodz in Poland. They were never heard of again.

Redlich may have succeeded in keeping the art from the Gestapo but the overall goal failed: when her son-in-law went looking for the paintings in 1947 the crates were empty. No one knows what happened and that, for the Klimt, was pretty much that until 1962 when it suddenly appeared at an exhibition in Austria labelled 'from a private collection'.

It comes to auction after a deal was brokered by Sotheby's between the painting's unnamed owners – who bought it in good faith – and the Redlich family's surviving heir and son of Mathilde, Georges Jorisch, a retired Montreal camera shop manager, now 81.

He was lucky enough to get out of Vienna aged 10. An amicable restitution deal has been struck in which the proceeds from the sale are split.

The Klimt, the Cézanne and the Giacometti will be sold at Sotheby's on 3 February along with works by artists including Henri Matisse, René Magritte and Joan Míro.

Sotheby's impressionist and modern art vice-chairman, Helena Newman, said the success of its New York November sale – it realised $182m when the upper estimate had been $163m – had encouraged sellers that the big buyers were still out there.

The top end of the market has also seen a new buoyancy because of the new billionaires on the block – the Chinese.

A few years ago they were mainly buying Chinese contemporary art; now Chinese collectors are competing with Russians, Americans and British buyers for the very best examples of European impressionist and modern art, Newman said.

The Giacometti sculpture of a thin walking man (L'Homme qui marche I) has the distinction of being the only lifetime cast of the subject ever to come to auction and could easily realise a record price for the artist. That it has come to market is partly down to the banking crisis – it was part of the collection of the collapsed Dresdner Bank and is being sold by new owners Commerzbank, with proceeds going to charities.

The Cézanne, Pichet et fruits sur une table, is regarded as a particularly fine example of the artist's work, so quintessential that it was used as the cover for John Rewald's authoritative biography of the artist.