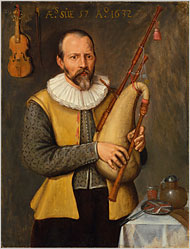 Office of the United States Attorney
“Portrait of a Musician Playing a Bagpipe,”
painted in 1632, is being returned to the
estate of its rightful owner.

A 17th-century Dutch painting that was separated from its owner, a German Jewish art dealer — under the orders of the Nazi regime in 1937 — was returned to the owner’s estate on Tuesday morning in a Holocaust Remembrance Day ceremony at the Museum of Jewish Heritage in Lower Manhattan.

The dealer, Max Stern, inherited his family’s art gallery in Düsseldorf, Germany, in 1934, but three years later the Nazis forced him to auction its contents because he was Jewish. After he lost an appeal of the order, Mr. Stern was forced to consign more than 200 works of art, including the “Bagpipe Player,” to the Lempertz Auction House, a Nazi government-approved art purveyor, for a forced sale. Among the works that were forcibly sold was a 1632 oil painting, “Portrait of a Musician Playing a Bagpipe,” by an unknown artist of the Northern Netherlandish school. Mr. Stern later fled to Canada, where he became a prominent art dealer and worked to reclaim his lost paintings.

Mr. Stern died in 1987, leaving his estate to the McGill and Concordia Universities in Montreal and to Hebrew University in Jerusalem, which have continued his work in trying to find his paintings, hundreds of which are still missing.

The repatriation of the “Bagpipe Player,” as the painting has become known, came about through the efforts of Immigration and Customs Enforcement, part of the United States Department of Homeland Security.

According to a news release from the United States attorney’s office in Manhattan:

During World War II, many of Lempertz Auction’s records were destroyed by bombing, hampering postwar searches to identify and locate the purchasers of Stern’s collection. Stern filed a restitutionary claim with the military government in the British zone of occupied Germany, placed advertisements in Canadian Art and Die Weltkunst in 1948 and 1952, respectively, and visited Europe in 1949 to search for his missing artworks. In 1958, he initiated judicial proceedings in Germany, and in 1964, a German Court awarded Stern with damages limited to profits lost due to the forced sale of his art collection. The “Bagpipe Player” has also been listed in three separate stolen art registries. Stern died in 1987, leaving any interest in his collection, including the “Bagpipe Player,” to his estate.

In November 2007, Lempertz Auction House — the same auction house that sold the Bagpipe Player in 1937 — sold the painting to London gallery Philip Mould Ltd. In December 2008, Lawrence Steigard, an art dealer in Manhattan, purchased the Bagpipe Player from Philip Mould, Ltd., with no knowledge of its
stolen provenance, and offered it for sale on the Web site of his gallery, Lawrence Steigrad Fine Arts, Inc. Information from the New York State Banking Department’s Holocaust Claims Processing Office led ICE agents to a Manhattan art gallery owned by Steigard. On April 2, 2009, Steigard confirmed the painting was in his possession and the ICE agents informed him that the painting was stolen and registered in several stolen art databases. Steigard eventually consented to seizure of the painting and entered into a voluntary stipulation to facilitate its return to the Stern Estate through this Office and ICE without the need for any judicial proceedings.

Karl-Sax Feddersen, a lawyer in Berlin for Lempertz, which is based in Cologne, Germany, said the auction house works with the Art Loss Register to check for stolen, looted or missing works of art.

“For some reason, neither they nor we detected this painting as being from the Stern estate,” Mr. Feddersen said, referring to the 2007 sale.

Mr. Feddersen noted that the painting’s relatively low value — it was estimated at 2,500 to 3,000 euros, or $3,242 to $3,890 at today’s conversion rates — and the lack of an identifiable artist contributed to the failure to identify the work as being from the Stern estate.

“We would love to keep paintings from the Stern sale out of our auctions,” Mr. Feddersen said. “As this case shows, especially for minor and less expensive, it’s hardly possible in every case.”

Mr. Stern’s estate has made numerous efforts to regain possession of the expropriated works of art.

In December 2007, a federal judge in Rhode Island ordered a German baroness, Maria-Luise Bissonnette, to turn over another painting, Franz Xaver Winterhalter’s “Girl From the Sabiner Mountains,” to the estate, stating that his “relinquishment of his property” was clearly “anything but voluntary.”

Ms. Bissonnette’s stepfather, Karl Wilharm, a member of the Nazi Party, bought the painting at the auction; Ms. Bissonnette, who resettled in Rhode Island, inherited it. Ms. Bissonnette has said that she and her family did nothing wrong. “I have the receipt,” she said earlier. “My father paid for it.”

Lev L. Dassin, the acting United States attorney in Manhattan, said in a statement about the return of the “Bagpipe Player,” “Each work of art returned brings us one step closer to the goal of repatriating all of the surviving works of art stolen by the Nazis.”

Peter J. Smith, the special agent in charge of the Immigration and Customs Enforcement Office of Investigations in New York, said in a statement, “It is only fitting that we return this precious work of art on Holocaust Remembrance Day.”

Clarence Epstein, the director of the Max Stern Art Restitution Project, said: “It’s a significant milestone. It’s an enormous boost to the vitality of the project and a vindication of the universities’ efforts in pursuit of these claims.”