The Hyperbolic Philanthropy of James Simon 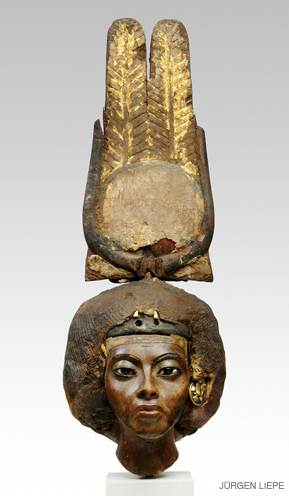 MORE MAGNIFICENT THAN NEFERTITI?: Simon collected busts of Egyptian queens Tiye and Nefertiti. The latter is iconic, but this wooden carving of Tiye (on display in San Francisco) is arguably the more magnificent.

GREATER THAN NAPOLEON: James Simon (pictured here circa 1914) collected more Egyptian art than anyone but Napoleon, and donated it all to museums.
James Simon (1851–1932), a Jewish cotton magnate from Berlin, was a museum benefactor of such magnitude that his current obscurity is astounding at best and a scandal at worst. As his biography finally emerges from anonymity, so does one story of the Jewish philanthropy that made Berlin a cultural capital.

And Berlin museums are hoping that the Jewish families who fled in the 1930s might write a new chapter.

Simon, a self-described Prussian Jew, is a difficult art-collecting act to follow, let alone equal. Starting in the late 1800s, he bought Venetian Renaissance paintings and medieval Christian sculpture, funded archaeological digs in Egypt and Mesopotamia (now Iraq), and eventually gave more than 20,000 objects to the museums of Berlin. The only collector who brought out more objects from Egypt was Napoleon; unlike Simon, the French emperor didn’t pay for them. And, unlike Napoleon, Simon gave away everything.

The serenely elegant head of the Egyptian Queen Nefertiti, unearthed in 1912, is the signature object of those rich collections. It is one of dozens of absolute masterpieces that Simon donated.

The range of Simon’s collecting and his generosity is evident in the exhibit, The State Museums of Berlin and the Legacy of James Simon, where 150 objects are on display at the Palace of the Legion of Honor in San Francisco.

Funded in part by Simon’s great-grand-nephew, Bay Area businessman Tim Simon (descended from cousins who fled the Nazis), the show is the first homage to the collector in the New World. There’s been no Simon exhibition in Berlin, unless you count the museums themselves.

Simon, who wanted philology rather than business to be his vocation, did earn recognition in Germany during his lifetime. In 1911, he was Germany’s sixth richest man, an “Emperor Jew” whose fortune and political connections made him a key member of the Kaiser Wilhelm Society, which acquired art and antiquities for state museums. In 1932, the aging Kaiser put a wreath on Simon’s grave. Yet that relationship did not keep his name and reputation from being expunged after 1933, when the Nazis seized the property of Jews and exterminated those who hadn’t fled. One niece managed to avoid deportation and survive the war when Hitler’s personal art adviser interceded.

Recently, James Simon’s name has been exhumed slowly, as Berlin unifies its museums and rebuilds original 19th-century buildings on Museum Island in the former East Berlin (one building there, the Neues Museum, has been shut since British bombers destroyed its roof in 1943). A modest bust and a plaque commemorate him at the Bode Museum, which holds paintings and medieval sculpture that he donated. The newest addition to the ensemble of museums there will be the James Simon Gallery, a colonnaded visitors’ center designed by British architect David Chipperfield. Underneath, an archaeological promenade, filled with objects that Simon donated, will run the length of Museum Island.

Walking through the San Francisco galleries, the sheer range of objects reminds you why a Berlin museum building might be named for Simon. At the entry is the head of Queen Tiye, the 1360 BCE yew wood bust of an Egyptian monarch — a donation from a dig that Simon funded. She’s not an idealized youthful beauty in the Amarna-style of 1340 BCE, although a magnificent dark stone head from that era is on view from another excavation that Simon funded. Tiye is depicted as weathered by life. The bust is a naturalistic reality check on the fragile iconic perfection of Queen Nefertiti, which Berlin wouldn’t send.

In the next room, a solemn 26th-century BCE bronze head of a bull is on view from an excavation that Simon financed in Mesopotamia to further research into the historical events of biblical times. Nearby is a sixth-century BCE lion in gold relief on blue bricks, similar to the animals on the massive Ishtar gate from Babylon in the Pergamon Museum in Berlin. All this is thanks to the same Jewish donor.

Simon, an assimilated Jew who, in 1881, founded the Aid Association of German Jews, supported a range of Jewish causes but collected no Judaica. His taste in Christian art was broad: In San Francisco, there are two ceramic bishops by Luca della Robbia, a tender “Virgin With the Sleeping Child” by Renaissance master Andrea Mantegna (1431–1506) and a violent scene of St. Michael spearing Lucifer, by 17th-century painter Luca Giordano.

Unlike most collectors, Simon was more benefactor than hoarder, financing excavations and pooling his money with others to buy art for museums. His major gifts were made in 1904 and 1913. Then, in 1920, he donated his entire Egyptian collection to a state institution. The family’s cotton business, Simon Brothers, suffered when it was cut off from the American market in 1914, and it failed after the stock crash of 1929.

Simon died broke in 1932, just before Hitler came to power. Yet he achieved an odd pre-emptive victory of sorts over the Nazis: He had donated all his art to German museums before the Nazis had the power to steal it.

His only brother Edward, an equally prodigious collector who was his business partner, sold all his art before shooting himself in 1930. Tim Simon says the family is unsure if the suicide was triggered by financial ruin or by despair that Germany would be ruled by the Nazis, who seized everything the family left behind. James Simon’s former villa was burned when Hitler became chancellor in 1933.

In a divided post-war Germany, with most of Berlin’s grand museums in the East, where the communist regime condemned plutocrats of any origin, only museum curators knew of Simon’s rich legacy.

But after reunification, when Berlin’s museums scrutinized the provenance of works that had once belonged to Jewish families, Simon’s role in building those institutions re-emerged.

“He’s one of the most extraordinary personalities who lived in Berlin, or in Europe,” said Bernd Schultz, an enthusiastic promoter of Simon’s legacy. Schultz, who is the editor of “James Simon; Philanthropist and Patron of the Arts” (Prestel, 2007), said that no other names were considered for the new structure on Museum Island.

That naming also eyes the future, and to the prospect of another James Simon emerging, perhaps even from the ranks of philanthropic families driven out of Germany by Hitler.

“It needs to be built up,” said Peter-Klaus Schuster, general director of the State Museums of Berlin. Schuster noted that private-museum philanthropy is below 1905 levels in Berlin because of the Nazi persecution of Jewish benefactors and because of capital flight from the once-divided city.

Even as some Jewish families are struggling to recover art seized by the Nazis, this odd gamble could be working; Tim Simon hopes to take the current exhibition for a tour of the United States in several years, after the works are shown in the renovated Neues Museum in 2012–2013.

Across Berlin, a museum is devoted to the collection of Heinz Berggruen, the Jewish art dealer who fled his native city in the 1930s and lived out his final years above the building’s galleries as a guest of the German government. Chancellor Angela Merkel, who attended Berggruen’s funeral, donated a second building next door for art collected by Berggruen’s sons. Photographer Helmut Newton (1920–2004, born Helmut Neustädter), who fled the persecution of Jews after Kristallnacht, left his collection to the Prussian Cultural Heritage Foundation in 2003.

The notion of renewed ties with Berlin has some Jews perplexed. “Now, they love you to death,” said Tom Freudenheim, the German-born former deputy director of the Jewish Museum in Berlin. Freudenheim’s family fled Berlin in the late 1930s.

Skeptics such as Henryk Broder, a writer for Der Spiegel who is Jewish, doubts that much good will is left on the Jewish side: “They were robbed of everything, and now they should come back and support this German cultural initiative? Why should they do it?”

Broder also questioned whether the museums needed money from a new generation of Jewish donors. “They are already heavily funded,” he said by telephone from Berlin.

Yet funds may still run short of ambitions in Berlin, where three museums on Museum Island are under renovation or construction, and a fourth, devoted to non-Western cultures, is planned.

The result could be an odd twist on history. A decade ago, the German state built the Jewish Museum in Berlin, Daniel Libeskind’s austere monument to a once-flourishing community. Could Jews, in the tradition of James Simon, rebuild monuments to Germany and fill them with art alongside Simon’s now priceless gifts?

For the would-be James Simon, the task today is impossible. Too few great works of art are on the market for far too much money. And recognition is another hurdle. As Simon himself once remarked chillingly, “One should never saddle anyone with the burden of gratitude.”

David D’Arcy is a New York correspondent for The Art Newspaper.