If This Picture Could Talk: A Malevich painting's long route to the auction block

The official provenance, or ownership history, of Kazimir Malevich's "Suprematist Composition" from 1916 that Sotheby's will sell Monday night is only nine words long: "The artist; then by descent to the artist's heirs." But the auction catalog details the painting's unlikely path from Stalinist Russia, to Poland, to Nazi Germany, to the Stedelijk Museum in Amsterdam, back to Malevich's widely dispersed heirs, and to Sotheby's. Even by the dramatic and often tragic standards of restituted art, the picture has had a quite a ride.

In the Stedelijk for 50 years, "Suprematist Composition," estimated at $60 million, could be the right bait for the faltering market's remaining high-rollers, wealthy Russians.

Malevich (1879-1935) was a pioneering abstract artist, and Suprematism was the movement he led that saw abstraction as a radically simplified grammar of circles and squares. The picture was not intended to represent anything, but to express creativity unbounded by rules or disciplines.

In 1927, with Stalin in the Kremlin tightening rules on art, Malevich left for the West, taking 100 pictures. There was praise and a potential market for his work in Warsaw and Berlin. Then came an official letter summoning him home, citing "visa problems." He left his art in Berlin, returned to Russia, and stayed there for the rest of his life. Malevich died in 1935, an impoverished and intimidated "bourgeois formalist," argot for artists unacceptable to Soviet officialdom.

Once Hitler came to power in 1933, the abstract works that Malevich left in Germany were ruled "degenerate" there as well. Alfred H. Barr, Jr., director of the Museum of Modern Art in New York, smuggled several out of the country to MoMA. The Hanover museum's director shipped out others (two ended up at the Busch-Reisinger Museum at Harvard), all on loan.

Malevich's German supporters fled the Nazis -- except for Hugo Haring, a Bauhaus-trained architect who ran an art school in Berlin after its Jewish director decamped. Haring moved to the Black Forest town of Biberach in 1943, and hid Malevich's unframed works under his bed.

Haring kept a low postwar profile (he had run an Aryanized institution), but the art trade tracked him down. Abstraction was the new international style, and Malevich was canonized as one of its prophets.

The German spurned all offers to sell, stressing that the art was not his. But in 1956 he agreed on a loan to the Stedelijk for a modest annuity of 12,000 marks. The contract with Haring, who was ill and needed money, provided for the Stedelijk to buy the collection for a mere 120,000 marks. The Malevich family says the deal was a fraud. Haring's family said the sum was never paid. By 1958, pictures that survived Stalin and Hitler were in the Stedelijk's permanent collection. 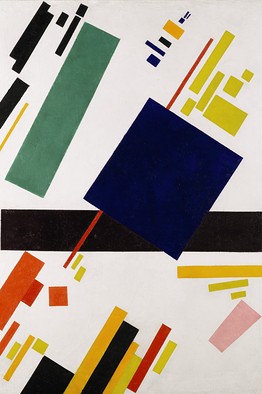 In the 1970s, Amsterdam rebuffed a Soviet effort to claim the paintings. At that time, the heirs in the U.S.S.R. got a small amount of money when Malevich's personal collection officially entered the State Russian Museum.

Clemens Toussaint, a German, took up the family's case in the late 1980s, rallying more than 30 heirs and hiring Lawrence M. Kaye and Howard Spiegler of Herrick Feinstein in New York to negotiate, over seven years, the return of works from MoMA and the Busch-Reisinger Museum. In 1999, MoMA gave the family $5 million and a 1925 "Suprematist Composition," which sold at Phillips International Auctioneers in 2000 for $17 million.

In 2004, those lawyers eyed a new opportunity when 14 Malevich paintings from the Dutch museum traveled to the Guggenheim Museum in New York and the Menil Collection in Houston, with immunity from seizure granted by the U.S. State Department. The family sued in federal court under the Foreign Sovereign Immunities Act, charging that the works were stolen property in the U.S. in violation of international law.

Amsterdam's American lawyers moved to dismiss the family's action, which they said violated the spirit of immunity. U.S. museums filed a brief predicting a chilling effect on foreign art loans. In June 2007, a U.S. judge ruled that the case could proceed, and Amsterdam's lawyers appealed. Yet the city settled in April of this year, giving up five of the 14 pictures. The Stedelijk received title to all other works in the museum that belonged to the artist.

Will Monday's auction be a $60 million victory lap in the Malevich family's marathon? Malevich, while rare at auction, is not a market stalwart like Picasso or Rothko or Warhol, even though Sotheby's places "Suprematist Composition" in the "masterpiece market." The $17 million that the former MoMA Malevich made at auction was only $2 million above Phillips's guarantee. In 2003, a 1915 "Suprematist Painting, Rectangle and Circle" returned by the Busch-Reisinger and estimated at $5 million to $7 million crashed at Sotheby's when bidding stopped at $4.6 million.

To minimize any risk, Sotheby's has contracted with an unnamed "irrevocable bidder" -- not a Russian, Sotheby's says -- to guarantee a minimum bid, acceptable to the family, at which the painting will sell if bids don't go higher. If bids exceed that prearranged price and another buyer acquires the picture, Sotheby's will compensate the "irrevocable bidder."

Mr. D'Arcy is a correspondent for the Art Newspaper (London).