Untouched by Nazi Hands, but Still . . .

A thief cannot pass good title. (No matter how many subsequent owners buy in good faith.) Relying on this well-settled principle of Anglo-American law, courts have invariably ordered the return of Nazi-looted art to the heirs of former Jewish owners. But what if the painting were never stolen, confiscated or looted by the Nazis? What if, instead, the Jewish owner sold his painting to protect it from impending seizure by the Nazis or to generate income for his family because the Nazis had stripped him of his livelihood? Is this a "forced sale" amounting to theft?

Up to now, if a museum or other owner of Holocaust art could show a credible chain of ownership (provenance), its title was presumed to be good and unassailable. Adding a new twist to Holocaust-looted art cases, the "forced sale" issue casts doubt on this long-held presumption. Whether it will be repudiated entirely will depend on the rulings of federal courts in Massachusetts and New York, which have been called upon to determine whether two Pablo Picasso paintings and two Oskar Kokoschka paintings were involuntarily sold by their Jewish owners as a consequence of Nazi persecution and, if so, whether that forced sale equated to theft or confiscation. 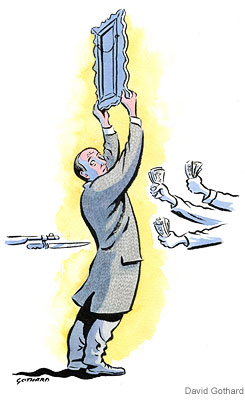 In December 2007, the Museum of Modern Art and the Solomon R. Guggenheim Foundation jointly asked a federal court in New York to declare them the rightful owners of Picasso's "Boy Leading a Horse" (1906) and "Le Moulin de la Galette" (1900). Their ownership of the paintings is being challenged by Julius Schoeps, who claims that the paintings were sold under duress as a direct result of Nazi policies against Jews. Both paintings belonged to Mr. Schoeps's great uncle, Paul von Mendelssohn-Bartholdy, a Jewish banker and descendant of the composer Felix Mendelssohn-Bartholdy.

Von Mendelssohn-Bartholdy acquired "Le Moulin de la Galette" in 1910. In 1934 or 1935, he acquired "Boy Leading a Horse" and sold both paintings (either in Lucerne or Berlin) to the Jewish art dealer Justin Thannhauser. (Court documents filed by the museums do not disclose the actual date of sale or the sale price.) Von Mendelssohn-Bartholdy died in May 1935, two years after Hitler was elected chancellor and three months after von Mendelssohn-Bartholdy executed a will bequeathing his art collection to his wife, Elsa, who was not of Jewish descent. The will has been described as a typical "Verfolgten-Testament" -- i.e., a will set up to protect property from the Nazis.

(Thannhauser fled Germany in 1937 and spent much of the war in Switzerland. He sold "Boy Leading a Horse" to William Paley, the former MoMA chairman and CBS founder, in 1936 in Switzerland for an unknown amount. Paley gave the painting to MoMA in 1964. Thannhauser kept "Le Moulin de la Galette" until 1963, when he gave it to the Guggenheim.)

Although von Mendelssohn-Bartholdy's will suggests he may have sold his Picasso paintings to keep them out of Nazi hands, there appears to be no evidence showing him to be a target of Nazi persecution. According to the museums' court documents, "There was no restraint of [von Mendelssohn-Bartholdy's] freedom of movement, his right to serve as a director of the bank, or his ability to transfer artwork or other assets."

In contrast, elements of overt Nazi coercion thread through the narrative of the Reichel family recited in court papers filed last month by the Museum of Fine Arts in Boston and a private owner against an Austrian woman purporting to be the Reichel heir and the true owner of Oskar Kokoschka's "Two Nudes (Lovers)" (1913) and "Portrait of a Youth" (1910). Oskar Reichel, a Viennese art dealer, first acquired the paintings from Kokoschka in the 1910s. ("Portrait of a Youth" is a likeness of Reichel's son, Hans.)

Oskar Reichel carried on a successful art business in Vienna until the March 1938 Nazi Anschluss. By June 1938, Hans Reichel left Austria to settle in Illinois. In November 1938, the Nazis closed down and liquidated Oskar Reichel's art business. By February 1939, he sold his Kokoschka paintings to a longtime business associate living in Paris, the Viennese Jewish art dealer Otto Kallir. The next month, another Reichel son, Raimund, fled Austria for Paraguay. In the two years following, Oskar Reichel was forced by the Nazis to sell his home, and another son, Max, was deported to a concentration camp and killed. In January 1943, Oskar Reichel's wife, Malvine, was also deported to a concentration camp, and a few months later Oskar died of "natural causes."

(Kallir moved from Paris to New York, opened another gallery and there sold "Two Nudes" to another art dealer and "Portrait of a Youth" to a private owner. The former painting was eventually bequeathed to the Museum of Fine Arts, Boston, while the private owner of the latter work has filed her own papers in court to clear her title.)

Possible reasons abound as to why Reichel sold his Kokoschka paintings (e.g., the ordinary course of business, protection from confiscation, money for food and rent, payment of exit taxes for family members, etc.), but a fact remains -- neither the paintings nor their sale proceeds ever passed through Nazi hands. Instead, both works were sold by one established Jewish art dealer-collector to another, as were von Mendelssohn-Bartholdy's Picasso paintings.

Another seemingly voluntary sale involved Paul Gauguin's "Street Scene in Tahiti" (1891), which was sold in 1938 by Martha Nathan, the wife of a prominent Jewish art collector and a member of the Dreyfus banking family, to a consortium of three European art dealers. In rejecting the claims of Nathan's heirs to the Gauguin painting at the Toledo Museum of Art, Ohio federal Judge Jack Zouhary wrote in a 2006 decision: "The painting was not confiscated or looted by the Nazis; the sale was not at the direction of, nor did the proceeds benefit, the Nazi regime. . . . The painting was acquired from her by acquaintances who, like her, were Jews who suffered during Nazi-era Germany." Soon after the Toledo Museum of Art decision, on essentially the same facts, Nathan's heirs also failed in their challenge to the title of the Detroit Institute of Arts' Vincent Van Gogh painting "Les Becheurs" ("The Diggers") (1889).

However, heirs have not lost all of the recent "forced sale" cases. In a landmark ruling in December, Judge Mary Lisi of the U.S. District Court in Rhode Island accepted the argument of a German art dealer's estate that the forced sale of Jewish-owned art in Nazi Germany was tantamount to theft. She ordered the current owner, a German baroness, to return a 19th-century painting by Franz Xaver Winterhalter, "Mädchen aus den Sabiner Bergen" ("Girl From the Sabiner Mountains"), to the estate of Max Stern.

Stern, who inherited a Düsseldorf gallery from his father, was ordered to liquidate his holdings through a Nazi-approved dealer in 1937. He sold the painting, along with most of his inventory and private collection, at a 1937 public auction in Cologne, Germany. The baroness's stepfather, a Nazi party member, acquired the painting at the Cologne auction. Stern fled to Paris in December 1937. The Nazi government froze his bank accounts and he never received the proceeds of the sale.

"It is clear that Dr. Stern's relinquishment of his property was anything but voluntary," Judge Lisi wrote in her decision. "The Court acknowledges that Defendant acquired the painting through no wrongdoing on her part. Defendant's predecessor-in-interest, [her stepfather], however, as a result of the acquisition of the painting through the forced sale, did not acquire good title to the painting." This decision, in effect, expands the category of works considered as Nazi-confiscated art in restitution claims.

Another unique aspect of the Stern case is Judge Lisi's observation that the Winterhalter painting was sold at a price "well below market value." Evidence of Holocaust art sold for below fair-market value is a strong indicator of an involuntary sale, but is rarely addressed by the courts. Often reconstructing evidence of these sales is impossible, because evidence may have been lost or destroyed during the war. For instance, the court papers filed by MoMA/Guggenheim and the MFA do not furnish the original von Mendelssohn-Bartholdy or Reichel sale prices or market values for their Picasso and Kokoschka paintings.

And even when such evidence has survived, other issues may render it irrelevant. For example, in their claims against the Toledo Museum of Art and the Detroit Institute of Arts, the Nathan heirs put forward the original and subsequent sales prices of Nathan's paintings. Gauguin's "Street Scene in Tahiti" was sold by Nathan for 30,000 Swiss Francs (then $6,900), and six months later it was sold in the U.S. for $25,000; "Les Becheurs" was sold for 40,920 Swiss Francs (then $9,360), and three years later for $34,000. But neither the Ohio nor the Michigan federal court addressed this evidence of sale prices versus market levels in its decision. In each case, the court ruled that the claims for recovery of property were barred by the operative statute of limitations -- four years in Ohio, three years in Michigan -- because the claimants had waited too long to bring suit.

Heirs of original owners alleging forced sales, where there is some generalized element of Nazi coercion, are not all certain to win in court. Since, at present, there is no legal definition of "forced sales," courts are in the process of defining them. The nature and specificity of coercion that would rise to the level of theft and so invalidate a present owner's title to artwork remains uncertain, but the MoMA/Guggenheim/ MFA cases awaiting decision in federal courts may provide comfort to good-faith owners of Nazi-era art.