A Monumental Hunt for Treasure

Probably the greatest treasure hunt in history. A big, big story. I was amazed how few people knew about it anymore," says Robert Edsel, and in a trice he's yarning away with compulsive zeal, though he has no doubt told it umpteen times before, or pieces of it, for the story is a big one in every sense. And, by now, Mr. Edsel's pursuit of it has become part of the lore too.

The story concerns the mass looting of Europe's patrimony by the Nazis, followed by the historic achievements of the so-called Monuments Men, the mostly American (and British) officers who recovered and repatriated so much of the theft at war's end. Listening to the 51-year-old Mr. Edsel, one realizes that this is a case of a grand story and the perfect exponent finding each other and coming to the fore at a most fertile moment. According to Mr. Edsel, "we will be hearing more and more about still unrecovered World War II art rising to the surface because we are at a pivotal time when that generation is dying, the Soviet archives are becoming available, things are popping up just as the Internet gains force and negates any attempts to hide anything." But equally, for the tall Texan, it's a critical moment for reminding the world of the American tradition of conserving the cultures of others. 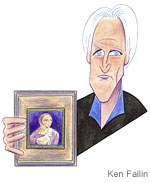 Mr. Edsel has devoted the past 12 years of his life to this project. What started as an interest became an all-consuming passion, a kind of calling, as he gained expertise, built up archives and interviews, and launched the full-time Monuments Men foundation with his own resources.

Last year, he self-published the book "Rescuing Da Vinci," which tells the main story in pictures. Then, this past year, he made news three times. First, his single-minded initiative to win appreciation for the Monuments Men finally triumphed this June 6, on the 63rd anniversary of D-Day, when both houses of Congress officially recognized their achievements. Then, on Nov. 1, the National Archives announced Mr. Edsel's discovery and donation of two missing albums from Hitler's own catalog of officially looted art. Finally, on Nov. 15, he and his Monuments Men foundation received the National Humanities medal. He was, on that occasion, accompanied by four of the last 12 surviving officers. One could argue that he made news four times, the fourth as co-producer of "The Rape of Europa," the stirring documentary now in general release that focuses equally on the obliteration of countless beloved European monuments during the war -- a haunting, unforgettable film.

Mr. Edsel hails from Dallas, where he almost became a pro tennis player. After college, with his tennis ambitions fading, he went into what he calls the "oil and gas business" with his own company. He managed to survive and succeed against "the big guys" by pioneering the use of horizontal drilling. At age 39 he sold his company "employing 100 personnel and taking in some $2 million per month" to Union Pacific. With the proceeds he moved abroad in 1995 and chose to settle in Florence, where he slowly acquired a collection of old master paintings and a close knowledge of European culture. (He moved back to the U.S. in 2001.)

It was in Florence that he first read the dense and detailed 1994 book by Lynn H. Nicholas entitled "The Rape of Europa" that eventually became the documentary, and which served as a genesis text for Mr. Edsel's raison d'etre from then on. We met in New York over several afternoons while he visited from Dallas to give talks and conduct oral-history interviews. I asked him to recount the process of his involvement in the project:

"Lynn Nicholas had written an extraordinary book, really several books in one. We became friends and collaborators. I realized that the story needed to be dramatized and popularized; it had to be realized visually to come off the page, which is where my own book 'Rescuing Da Vinci' came from -- after months and years of follow-up work in photo archives. But above all, I felt that the individual stories of the Monuments Men themselves had yet to be told. Some people knew about the wartime events, the preventive packing away of the Louvre, the looting of great collections from French Jews such as Rothschild and David-Weill, their recovery from caves, their restitution, the overall story, but what about the Monuments Men themselves? Who were they? Where did they come from and go to?

"The initial 65 until the war ended, until the numbers rose to include drivers and packers and logistics folk, the initial ones were preselected for their experience in paintings, libraries, conservation and the like. They played a seminal role in subsequently founding or running many of America's cultural institutions, as curators and thinkers and directors -- such as Lincoln Kirstein, who founded the New York City Ballet, and James Rorimer, who became director of the Metropolitan Museum. Rorimer helped restore the Rothschild and David-Weill possessions while Kirstein helped locate the Van Eyck Ghent Altarpiece in a cave. Nobody had thought of the Monuments Men as a body, because they didn't belong to a single corps but were attached to various separate parts of the Army. When I understood that they added up to an entire oral history in themselves, I suddenly realized that time was running out. Many of them were dying. So I began a kind of salvage operation to meet and interview them in time."

Hitting on a cultural motherlode of this kind seemed akin to what Mr. Edsel had done in the oil business: rediscovering with a new approach a field with tons more potential than previously understood. He believes that he will generate a series of books from all the stories, telling them in manageable bites. I asked him to relate some. "Did you know for example" he said, "that the OSS, which was the CIA of the time, sent out an ultrasecret task force to investigate the disposition of the plunder? Hard to imagine now, but they feared that the material was being reserved and hidden to finance a future Nazi revival, a kind of Fourth Reich. Very few of the OSS guys knew about this -- they didn't talk openly to each other. You haven't seen an amazed expression until you see an OSS spook being told something they didn't know from their subject area after all these years. I spoke at the Eisenhower Institute hosted at the Army and Navy club in D.C. in February, and that story caught their attention, believe me.

"But I think most ordinary folk don't know the astonishing scope of the Nazis looting plans -- it was very systematic, on a massive scale and carefully planned before the war. They had lists of the art they wanted to confiscate, the places to find them and even alternate places where they might be hidden. Within three weeks of invading Poland they had taken all the Rembrandts in the country. Göring made 20 visits to the Jeu de Paume museum in Paris just to pursue his plundering -- imagine the diversion from the war effort to pull off this concerted heist of a continent's art."

I pointed out to Mr. Edsel that if one defined the Monuments Men's conduct, in part, as acting in the disinterested service of culture, his own conduct seemed to be informed by their legacy. As an example, I cited his donation of the Hitler Albums. How had that come about? He avoided giving too much detail; he said he had vouchsafed absolute anonymity to the source, but he felt that this too was part of the history.

"Hitler had Speer design a future Führer Museum for his hometown of Linz in Austria where Europe's greatest art, much of it confiscated, would be on exhibit. To curry favor with Hitler, a top Nazi -- Albert Rosenberg -- compiled a multivolume, impeccably crafted catalog of looted art for Hitler to pick from for his planned museum. Thirty-nine volumes exist in the National Archives in D.C. They didn't know more existed. In April this year we were contacted with the information that a family had two 'albums of photographs' from Hitler's home in Berchtesgaden. It turned out they'd been taken as souvenirs by a GI stationed there. He'd died and his relative was looking to sell them. They were particularly good ones featuring mostly paintings, by the likes of Watteau and Fragonard. I met with the contact. I couldn't honestly tell him their worth. It wasn't clear who would buy them, for how much, and who even owned them legally. Ultimately, he sold them to us in the strictest confidence for a modest price. The National Archive now believes some 88 were made, so there's more out there.

"The incident illustrates my belief that many more wartime objects will now resurface. Consider this: Officially, maybe millions of objects are known to be missing. Just in Poland, some 60,000 pieces are recorded on a central database as missing. If you assume that much of it has perished, porcelain was broken, silver melted down, there's still masses left over -- weapons, armor, books and the like. And that's just what the Germans took. Six years is a long time for committing a burglary. It was also a time when anyone might steal and sell anything for food, cigarettes, a coat. But just because something is listed as missing, doesn't mean it's lost. If 10% has survived, that's still tens of thousands of objects. And suddenly with the advent of the Internet and databases, instant data-sharing across continents, more objects will be claimed and we will be facing the issue of who owns what, how far does ownership go back, of different laws in different countries -- it'll be a significant issue in the next few years."

In all such encounters, the moment comes when one wonders rather awkwardly about money matters -- how had Mr. Edsel financed this? I asked him what had he done for income and if there was a revenue stream in sight.

"I have managed to do almost no business during these years because I felt a tremendous urgency before the remaining Monuments Men passed away. We managed to speak to all 15 we found living, but three have since died; 235 were already dead. One hundred we have yet to locate -- a lot of work. I had to sell some paintings, and at one point I almost put my house in Dallas on the market. Just my traveling costs might reach $70,000 a month. But we have come a long way. I will be doing more books, a movie from selected real-life stories, and traveling exhibitions. I believe the foundation will generate revenue soon as a research center with a major database for people needing advice on missing objects, provenance, ownership and the like -- it will certainly be much cheaper for them than hiring lawyers, which is the only option now.

"We will, in a way, be finishing the task of the Monuments Men -- whose brief was to repatriate things to the country of origin, not to individuals. The countries were meant to do the rest. Well, there's a lot still not done and we will help complete that task."