Footprints of Holocaust in a Battle for Lost Art 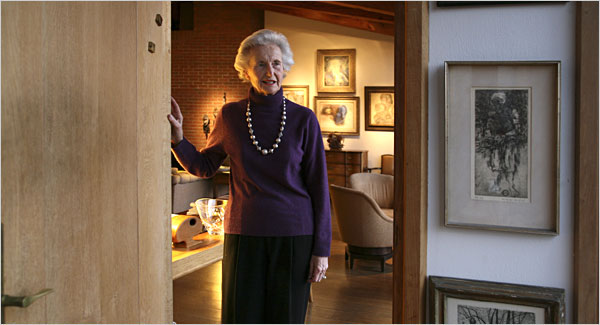 Joyce Dopkeen/The New York Times
Martha Nierenberg at her home in Armonk, N.Y. Artwork that belonged to her family was stolen when Germany invaded Hungary in 1944.

Something wonderful happened to Martha Nierenberg in October 2000 when a trial court in Hungary said something very obvious. A fortune in artwork had been stolen from her family at the time of the German invasion of Hungary in 1944, which also ushered in one of the most horrific chapters of the Holocaust. Much of the art was hanging in plain view in the country’s two most prominent museums. It should be given back to her, the court said. The ruling was the second in her favor, and it seemed definitive.

She went to Hungary to see the magnificent paintings by El Greco, Courbet, Van Dyck and others. There were celebrations and grand plans. After decades without hope of recovering the art, after frustrating years of negotiations toward an amicable settlement after the fall of the Soviet Union, it seemed a reminder that justice could be slow, but when it arrived it was a blessed thing.

But, alas, it never arrived. The Hungarian government, eager to keep the art, appealed the ruling. That led to new trials and new arguments, each more legalistic and narrow than the one before.

So when she got more news last week it was not wonderful, but it was not unexpected. Another Hungarian appellate court in Budapest, ruled in favor of the government. It found that the government had acquired the art through “prescription,” the principle that by possessing the property for long enough it had gained ownership of it. It was the fifth ruling in the case. It left Mrs. Nierenberg and her allies convinced that if she were ever to find justice, it would not come through the Hungarian courts.

And it added another chapter to a dark story that reminds us that sometimes history plays out like “Schindler’s List,” and sometimes, well, Mrs. Nierenberg hopes she’s around to see how it finally plays out.

“I’m 83; I guess they’re hoping they can wait me out,” said Mrs. Nierenberg, whose family, one of the richest and most powerful in Hungary before the war, fled the Holocaust in 1944. With her husband, Ted, she went on to found the Dansk housewares company, which was later sold. “Part of me is frustrated. Part is angry at the government there. It’s been a long time, but you keep on.”

The collection dates to her grandfather Baron Mor Lipot Herzog, a banker in prewar Budapest. He assembled one of Europe’s great private collections of art and the greatest in Hungary — works by Velázquez and El Greco modern art by Renoir, Monet and other Impressionists, furniture, tapestries, sculpture, maybe 2,500 pieces at its peak.

In 1944, the Hungarian government began systematically cataloguing and seizing the valuables of Hungarian Jews. The Herzog collection was mostly hidden in the cellar of one of the family’s factories, then found and taken directly to Adolf Eichmann’s headquarters at the Majestic Hotel in Budapest for his inspection. Many pieces were shipped off to Germany with a few left in Hungarian museums. Most of the family escaped from Hungary, but the world they knew was obliterated.

From April 16 to July 19, 1944, half the Jews of Hungary, some 427,000 people, were sent to Auschwitz. The slaughter moved Winston Churchill to write to his foreign secretary, Anthony Eden: “There is no doubt that this is probably the greatest and most horrible crime ever committed in the whole history of the world.” Maybe it’s been topped since. Who knows?

Mrs. Nierenberg’s quest, narrowed to 11 paintings she inherited now valued at $15 million to $20 million, of course, is a tiny whisper compared to the horrific roar that was Auschwitz. She is a rich woman in a gorgeous modern home, full of other kinds of art — her husband’s photographs, taken around the world, African masks, an eclectic assortment of paintings.

But, along with other claims large and small, it’s one of the most important remaining claims asking for simple justice in the face of one of history’s most dreadful injustices. As always, there are legal issues as precise as pinpricks. What is the effect of a 1959 payment of $169,827 by the Foreign Claims Settlement Commission of the United States for artwork and real property to Mrs. Nierenberg’s mother? Exactly what futile but symbolic efforts should the family have made during Soviet rule to have voided any statute of limitation issues for filing claims?

Still, the United States Commission on Security and Cooperation in Europe, which has advocated on her behalf, managed to cut to the chase in a letter last week. “Why would the Hungarian government insist on retaining custody of artwork stolen by the Nazis when it could return it to its rightful owner?” the commission asked in a letter to Hungary’s foreign affairs minister, Dr. Kinga Goncz.

“Whether a court actually orders the return of these paintings or not, we urge your government to return to Mrs. Nierenberg without further delay the paintings that were stolen from her family,” the letter said.

In the face of a nightmare of history where justice can never be done, it doesn’t seem like so much to ask. But maybe it is.