April
BBC News 30 December 2007
A London exhibition of major Russian and French artworks is expected to get the go-ahead when a new law to protect them comes into force on Monday. 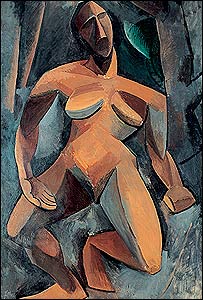 The exhibition includes works by Picasso and Van Gogh
Russia pulled out over fears the paintings would be seized because of disputes about their ownership. But the country's culture agency agreed to export the works once a new law was implemented guaranteeing their safety.

'From Russia: French and Russian Master Paintings' is due to open at the Royal Academy of Art on 26 January. Some of the 120 paintings included in the exhibition had been taken from private collections after Russia's 1917 revolution. It was thought some of them could be seized to settle private legal claims.

The Department for Culture, Media and Sport announced earlier this month that the "immunity from seizure" legislation which was due to come into force in February would be brought forward.

It has now confirmed that Culture Secretary James Purnell has made the order to bring the legislation in on 31 December.

It means that descendants of the original owners cannot bring forward their claims on British soil.

The chief executive of the Royal Academy of Arts, Charles Saumarez Smith, said he expected the Russian Federal Agency for Culture and Cinematography to give final approval to the loans on 8 January.

The exhibition is currently showing in Dusseldorf, Germany.

Both the British and Russian governments have denied the clash related to the fallout from the murder of former KGB agent Alexander Litvinenko in London last year, which has led to strained relations between the two countries.