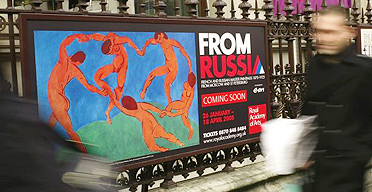 People walk past a poster advertising the forthcoming exhibition 'From Russia : French and Russian Master Paintings 1870-1925' outside the Royal Academy of Art in London. Photograph: Sang Tan/AP

The Russian government said today it will loan paintings from its museums for a major exhibition in London, after Britain fast-tracked legislation to protect art from seizure.

The exhibition was in doubt earlier this week after Russian officials said the paintings - which include works by Renoir, Cézanne, Van Gogh and Picasso - would not be sent to the UK.

In an attempt to save the Royal Academy (RA) exhibition, the government yesterday announced it was bringing forward new legislation in order to ease the Russian concerns.

The Department for Culture, Media and Sport said it would fast-track "immunity from seizure" laws to cover the paintings the Russians have threatened not to lend the show.

Russian officials said they wanted more protection from individuals who might claim the works had been looted from their families during the 1917 Russian revolution.

A Russian federal culture agency spokeswoman, Natalia Uvarova, said today her office would issue licences for the paintings to go to London only after the British law comes into force on January 7.

"The law must ensure the art's immunity from seizure," she said.

Uvarova said the paintings, currently on show in Düsseldorf, Germany, will return to Moscow before coming to London.

She would not say whether the RA exhibition could open on schedule, saying it would be up to organisers to decide whether they could ship the paintings quickly enough after the new law comes into force.

A spokeswoman for the RA said the show - From Russia: French and Russian Master Paintings 1870-1925 - was expected to open on schedule on January 26.

She said: "Following the announcement by James Purnell that the new legislation will be put in place by 7 January 2008 ... the Royal Academy expects the exhibition to take place as planned.

"The Royal Academy wishes to express its gratitude to the Department for Culture, Media and Sport for their support for the exhibition and for making it possible."

The exhibition is one of the most keenly anticipated of the year. It will include works from the Hermitage museum, in St Petersburg, which have never been exhibited in Britain before and are insured for almost £1bn.

The new legislation, which was originally due to come into force in February, is designed to bring Britain's laws in line with the rest of Europe.

It means descendants of the original owners cannot bring their claims on British soil.

A spokesman for the Department for Culture, Media and Sport said yesterday: "The immunity from seizure legislation would not have been in force in time to cover this exhibition.

"Due to the special circumstances of this case and the importance of this exhibition we are bringing this forward to be enacted on January 7. We believe that there can be no further obstacles to the loans taking place."

Earlier this week, the Russian culture agency chief, Mikhail Shvydkoi, said descendants of two prominent 19th and early 20th-century Russian art collectors, Sergei Shchukin and Ivan Morozov, had not ruled out legal action over their claims to works in the show.

In 2003, Shchukin's grandson Andre Marc Delocque-Fourcaud, a French citizen, sued in an unsuccessful bid to remove paintings he claims the Bolsheviks looted from his grandfather in 1918 from the travelling exhibition of Moscow's Pushkin museum.

In 2005, a collection of French masterpieces belonging to the Pushkin museum was seized and held in Switzerland over millions of pounds in alleged debts that a Swiss company claimed was owed to it by Russia. The Swiss government later stepped in and ordered the paintings returned to Russia.

The unexpected move to withdraw the loans from the RA show had been seen as having little to do with art and everything to do with worsening relations between Russia and Britain since the murder of the former KGB spy Alexander Litvinenko.

Litvinenko died in a London hospital after being poisoned with polonium-210, a rare radioactive isotope.