A Lawsuit Will Determine the Fate of 2 Picassos 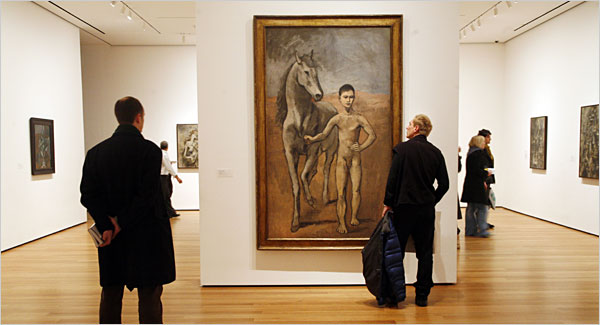 Patrick Andrade for The New York Times
“Boy Leading a Horse,” by Picasso, on view Monday at the Museum of Modern Art. An early owner’s heir has claimed ownership.
By ALAN FEUER
You might begin by picturing a spring day in Berlin, two months after the rise of Adolf Hitler. It is late March 1933, and a man has called upon an art transporter, Gustav Knauer, to hire him for a job.

Solomon R. Guggenheim Museum
“Le Moulin de la Galette” is one of two Picassos that are the subject of a lawsuit by two museums claiming rightful ownership.

His name is Paul von Mendelssohn-Bartholdy, a banker and scion of a wealthy Jewish family of philanthropists and financiers and patrons of the arts. At 58, and in failing health, Herr Mendelssohn-Bartholdy is known throughout Berlin — indeed throughout all Europe — for his luminous collection of Impressionist and early Modern paintings that hang at his town house in the Alsenstrasse and at the family villa outside town.

The matter at hand on this day, March 23, concerns five Picassos that Herr Mendelssohn-Bartholdy is sending to Switzerland. Mr. Knauer has arranged for them to be received by a Swiss dealer, and placed in private storage. There they will remain for an entire year, safely stowed, until the banker in Berlin decides to sell them, a decision that sets in motion a lawsuit on another continent not to be filed for another 74 years.

That lawsuit, filed this month in Federal District Court in Manhattan, now pits an heir of the Mendelssohn-Bartholdy family against the Solomon R. Guggenheim Foundation and the Museum of Modern Art. The heir, Julius H. Schoeps, a grandson of one of Paul von Mendelssohn-Bartholdy’s sisters, has claimed that two of the Picassos — “Le Moulin de la Galette,” done in 1900, and “Boy Leading a Horse,” from 1906 — were sold under duress during the Nazi regime, and thus, belong to him.

The two museums, which have displayed the paintings for more than 40 years, claim they were never part of a forced sale and have asked a court to declare them the rightful owners.

The lawsuit is many things to many people: a footnote to the Picasso story, a historic art-world spat, and the latest example of museums joining forces to win legal confirmation that they own disputed works. But because of the vast research performed by the museums to establish the provenance of the paintings, it is also a privileged and ornately detailed glimpse into the lives of an aristocratic Prussian-Jewish family at the moment of its demise.

Unlike much of European Jewry, the Mendelssohn-Bartholdys lived in luxury from as early as 1795 with the founding of Mendelssohn & Company, the family’s private bank. There were thinkers and artists in the family — notably the philosopher Moses Mendelssohn and the composer known as Felix Mendelssohn — though, by the turn of the 20th century, they were better known for finance and philanthropy and for having been elevated to the aristocracy by Kaiser Wilhelm I.

Following tradition, Paul von Mendelssohn-Bartholdy became a co-owner of the bank in 1908, upon his father’s death. An early marriage ended in divorce, and in 1927 he remarried — to the aristocratic and extravagantly named Elsa Lucy Emmy Lolo von Lavergue-Peguilhen, later the Countess Kesselstat.

In the way of wealthy men who marry younger second wives, he presented Elsa with a remarkable wedding gift: his art collection. He left it to her in a reconfigured will, making her master of all property in the marital homes, while providing income for his four sisters, one of them Mr. Schoeps’s grandmother.

On May 10, 1935, Paul von Mendelssohn-Bartholdy died of a weak heart in a Berlin sanitarium. After the funeral, his widow and his sisters gathered in the country, with the family lawyer, whereupon the will was read and it was determined, to nobody’s surprise, that the deceased had been a very wealthy man.

Beyond personal assets of 1.7 million reichsmarks (about $684,000 today), there was the villa, Schloss Börnicke; the town house in Berlin; property on the grounds of a royal palace; and holdings in the Netherlands, Belgium and England. There was also the art, minus those Picassos, which at some point that year — no one knows precisely when — had been sold to a gallery in Munich.

The gallery owner, Justin K. Thannhauser, displayed them briefly at a show in Buenos Aires, then kept “Le Moulin de la Galette” for himself while selling “Boy Leading a Horse” to an American, William S. Paley, the founder of CBS.

The lawsuit does not say what either man paid for the paintings, though today it is likely that each would sell for millions of dollars. A lawyer for Mr. Schoeps, who has laid claim to both, did not return a phone call seeking comment.

One need not imagine the indignities that Elsa suffered after her husband’s death: They are spelled out in the lawsuit. In 1938, she was forced to sell the Alsenstrasse home, No. 3/3a, to the authorities so that Albert Speer, the Nazi architect, might build an office. Parcels in the countryside went next. In 1943, the villa was leased to the Swiss, whose ambassador lived there with Elsa and her new husband, Count von Kesselstat of Austria. Two years later, the couple fled to Switzerland, escaping Stalin’s armies.

By that time, Mr. Thannhauser had also fled, taking “Le Moulin de la Galette” on an exile’s tour. He went to Paris first, then Switzerland, then finally New York, where in 1963, he gave the painting to the Guggenheim. The very next year, Mr. Paley gave “Boy Leading a Horse” to the Museum of Modern Art.

As for the countess, she lived for many years in Switzerland, dying there in 1986, at her residence in Ascona. Mendelssohn & Company is gone, acquired during World War II by Deutsche Bank, for which the family received 75,000 deutsche marks (not quite $19,000 today) from the German government in 1968.

According to the lawsuit, it got nothing for the properties the Nazis stole, including Schloss Börnicke, which stands today in the countryside beyond Berlin, a concert hall and tourist site.