Two Museums Go to Court Over the Right to Picassos

In a legal strategy that is spreading in the art world, the Museum of Modern Art and the Solomon R. Guggenheim Foundation jointly asked a federal court yesterday to declare them the owners of two Picasso paintings that a claimant says were sold under duress in Nazi Germany. 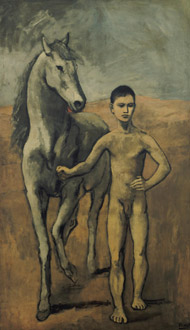 A request for declaratory judgment, filed in Federal District Court in Manhattan, involves “Boy Leading a Horse” (1906), donated to MoMA in 1964 by William S. Paley, the founder of CBS, and “Le Moulin de la Galette” (1900), given to the Guggenheim in 1963 by the art dealer Justin K. Thannhauser.

The museums asked the court to declare that the paintings had never been part of a forced sale and rightfully belong to them.

“Both museums feel this claim is without merit,” said Thomas Krens, director of the Guggenheim. “This is a serious issue, and we want to take the most direct path to confirm it.”

Mr. Schoeps requested access to the museums’ information about the works’ provenance, which museum officials provided.

Calls to Mr. Schoeps’s lawyer in Washington were not returned yesterday.

Both paintings have been included in exhibitions around the world and have long been identified with each institution.

In letters dated Nov. 1, Mr. Schoeps’s lawyers asked the museums to turn over the paintings. That demand, in addition to Mr. Schoeps’s legal history, prompted the Guggenheim and MoMA to go to court.

Last year Mr. Schoeps advanced a similar legal claim to another Picasso painting, “Portrait of Ángel Fernández de Soto” (1903), which the Andrew Lloyd Webber Foundation sought to sell in an auction at Christie’s in November 2006.

A federal judge dismissed that legal action, saying his court lacked jurisdiction. But Mr. Schoeps quickly filed a suit in state court, which led Christie’s to remove the Picasso from the auction. The sale estimate for the painting had been $50 million to $60 million, compared with the $29 million that Mr. Lloyd Webber paid for the work in 1995.

The Guggenheim and the Modern’s Picassos have a similar history. Mr. Mendelsshon-Bartholdy, a respected financier and philanthropist, amassed one of Europe’s finest private collections, including works by Renoir, Rousseau, van Gogh and Picasso. He gave them to his second wife, Elsa, as a wedding present in 1927.

In 1936 Mr. Thannhauser sold “Boy Leading a Horse” to Mr. Paley; he kept “Le Moulin de la Galette” for his personal collection and carried it with him to the United States when he immigrated in 1940. He later gave it to the Guggenheim, along with other paintings.

“The provenance chain is complete,” said Glenn D. Lowry, director of the Museum of Modern Art. “We have done an enormous amount of research, which confirmed what we already knew: There is absolutely no evidence that these paintings were sold under duress.”

This is not the first time that two museums have joined forces to seek legal confirmation that they own disputed works.

After an 18-month joint research project, the Detroit Institute of Art and the Toledo Museum of Art took similar action in separate court cases in January 2006 involving two paintings, one by van Gogh and one by Gauguin.

Martha Nathan, a member of a Jewish banking family that emigrated from Germany to France in 1938 to escape Nazi persecution, sold the paintings that year to three Jewish art dealers.

She did not seek to reclaim them after the war, but her heirs approached the Detroit and Toledo museums in 2004 to begin advancing their claims to the works. When the museums went to court, the heirs also filed legal claims.

Both judges ruled narrowly, however, granting no declaratory judgment of ownership to either museum. They both said the heirs’ claims had been filed too late under the states’ respective statutes of limitations.