Lauder’s Openness Is Sought on Artwork

For the cosmetics heir Ronald S. Lauder, who drew global attention last year by acquiring a lustrous portrait by Gustav Klimt for $135 million, the exhibition opening today at the Neue Galerie is something of a love fest.

The show, “Gustav Klimt: The Ronald S. Lauder and Serge Sabarsky Collections,” celebrates not only Klimt and his fin-de-siècle milieu in Vienna, but Mr. Lauder’s fervent passion for acquiring art.

“We knew this would be a major show for us because of the importance of Gustav Klimt, because we had great holdings,” Mr. Lauder, 63, said during an interview at his office overlooking Central Park. (Mr. Sabarsky, a European-born art dealer who helped found the Neue Galerie with Mr. Lauder, died in 1996.)

But for some experts in Holocaust restitution research, the show raises another issue related to Mr. Lauder’s trove: He declines to issue documentation of his private collection for public scrutiny.

Among the major collectors of Vienna Secession and German Expressionist artworks between the two world wars were many prosperous European Jews, who often had to surrender their art when they were deported by the Nazis or fled abroad. And Mr. Lauder and Mr. Sabarsky’s collections are among the most prominent private holdings of such works in the United States.

At the same time Mr. Lauder donates heavily to Jewish causes and champions restitution to Jewish heirs. He is president of the World Jewish Congress, for example, and once oversaw its art recovery commission.

“I find it strange because of who Lauder is and who he has claimed to be in terms of his concern for those who suffered at the hands of the Nazis,” said Ori Soltes, president of the Holocaust Art Restitution Project. “I would think he would bend over backwards to at least be a shining light of provenance propriety.”

Many American collectors consider their private collections to be just that: private. But some restitution experts suggest that Mr. Lauder’s prominent role requires complete transparency, at least when it comes to art that may have changed hands in Nazi-occupied Europe.

In a later interview at his office Mr. Lauder said that over the years he had turned over various items in response to claims or as a result of his staff’s provenance research.

“But those were pieces that had records to substantiate the owners’ claims,” he said. He mentioned “a beautiful Renaissance shield” and an artwork by the Russian artist Orest Adamovich Kiprenskii.

He said that he had about a dozen employees devoted to his collection, and that their responsibilities include thoroughly researching the provenance of any piece he acquires.

Asked by The New York Times for an inventory of his German and Austrian works and related provenance information, he declined to release such material. “It’s my private collection,” he said. “Would it be O.K. for people to see what dresses you have in your closet?”

“Every work of art — I would say almost without exception — in my collection has all been exhibited; all have long records,” he added. “I’m just as interested as anyone else to find the pieces that were stolen.”

Mr. Lauder said that by displaying his and Mr. Sabarsky’s Klimt paintings and drawings at the Neue Galerie — and arranging a show of their Egon Schiele works there in 2005 — he was essentially opening the door to public scrutiny.

Despite the new exhibition’s title, none of the catalog entries for the Klimts on view that are owned by Mr. Lauder bear his name; instead they say, “Private Collection, New York.” Mr. Sabarsky’s Klimts are listed as belonging to his estate.

Jane Kallir, owner of the Galerie St. Étienne in Manhattan, founded by her grandfather, Otto Kallir, who promoted Schiele in the United States, said that Mr. Lauder “has been really pretty forthcoming about what he has.”

“It’s not a question of some deep, dark secret people are hiding; there’s a dearth of conclusive information,” she added. “There are some things that aren’t known and perhaps will never be known.”

E. Randol Schoenberg, a Los Angeles lawyer who won restitution from the Austrian state of five Klimt paintings that belonged to the Viennese Bloch-Bauer family, recently suggested that Mr. Lauder’s brother, Leonard, might own a Klimt painting that was taken from a claimant’s grandmother. (Leonard Lauder has said that the grandmother never owned it, and that the claim is baseless.)

Of Ronald Lauder Mr. Schoenberg said: “He’s always been up front with me. I’ve never had any trouble with him.” 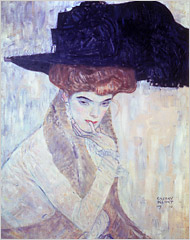 At the same time Mr. Schoenberg said that Ronald Lauder and Neue Galerie should provide more specific provenance information about their holdings. “Since he’s at the forefront of asking people to return that kind of property, it would make sense for him to do that,” Mr. Schoenberg said. “It would certainly set a good example if he were to make public his collection.” 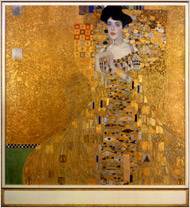 Ray Dowd, a lawyer representing heirs of Fritz Grünbaum, a Viennese art collector, said he had demanded that Mr. Lauder hand over “I Love Antitheses,” a color drawing by Schiele, to the family and three Schiele works that had been displayed at the Neue Galerie. “We’ve not gotten a substantive response,” he said.

But through the Neue Galerie, Mr. Lauder said that the claim was without merit. “There was nothing to it,” he said. This year Mr. Dowd fought unsuccessfully in court to include Mr. Lauder and the Neue Galerie as defendants in a class-action suit related to the Grünbaum claims.

The Neue Galerie, the jewel box of a museum that Mr. Lauder founded in 2001 in a mansion at Fifth Avenue and 86th Street, has posted some provenance information about its collection on its Web site, neuegalerie.org. If an online visitor types in the search term “Schiele,” for example, links to five works pop up. Each entry lists previous owners of the work, but no acquisition dates.

Mr. Soltes of the Holocaust Art Restitution Project said the Neue Galerie should furnish whatever dates it has. “You list the list of owners, but do you list the years of ownership?” he said “And if there are holes in the years between 1925 and 1945, that’s already a red flag.”

Similarly, the 477-page catalog for the new Klimt exhibition lists provenances, but no indication of when any of the works changed hands, except for a mention of the 1938 Nazi Anschluss in the entry for a portrait that Austria returned to Maria Altmann, a Bloch-Bauer heir, last year. That was “Adele Bloch-Bauer I,” which Mr. Lauder then purchased from Ms. Altmann for $135 million.

Mr. Lauder said that “most of the time there were no dates,” particularly for drawings, which he said dealers often bought casually without keeping records. The Klimt show includes 8 paintings and 126 drawings.

Tina Walzer, a Vienna-based art historian who is a consultant in restitution cases, said, “If you want to be as open as possible, you have to give full provenances,” including any dates that are available.

Most American museums are bound by a commitment made by the American Association of Museums to the Presidential Advisory Commission on Holocaust Assets to post pertinent provenances online. That agreement, which covers art acquired after 1933 and produced before 1946, is intended to enable people to research American museum collections without having to travel to them.

Museums have conformed in varying ways. The Museum of Modern Art lists titles and photographs for works in its collection that were sold or had a provenance gap in that period. The Metropolitan Museum of Art also provides a list of previous known owners and acquisition dates.

Although the Neue Galerie lists previous owners, until this week it was not among the participating museums in the Nazi-Era Provenance Internet Portal, a searchable online registry of objects in American museum collections that changed hands in Continental Europe during the Nazi era.

In response to a query from The Times, Renee Price, Director of the Neue Galerie, said in an e-mail message two weeks ago, “Now that the Neue Galerie has reached this stage, the museum can address the matter of participating in the Nazi-Era Provenance Internet Portal.”

Yesterday she said in an e-mail message, “Finally, the museum account with the Nazi-Era Provenance Internet Portal has been set up.”

It was through Mr. Sabarsky that Mr. Lauder was introduced to Schiele and acquired a drawing, his first purchase as a young collector. ( Mr. Lauder likes to recount that he bought it with his bar mitzvah money and ultimately sold it for a Schiele watercolor.)

Thus began a close relationship between the collectors that lasted 40 years. “We spoke every day,” Mr. Lauder said. “We discussed art. We discussed Austria and life.”

Mr. Lauder’s devotion to his collection comes through vividly as he shows visitors around his Midtown office. Entire rooms there are devoted to large spiral notebooks tracking his holdings and to items he has recently acquired: a set of silverware, antique boxes, vintage drinking glasses.

A bare space on one wall is where one of his favorite Klimts hung until recently: “Lady With Feather Hat.” He lent it for the exhibition, and it will clearly be difficult for him to live without it for eight months. (The show is scheduled to close on June 30.)

“The whole Neue Galerie is personal,” he said. “What makes the gallery so personal is it was put together by two people who had a certain love.”

Were anyone to make a legitimate claim to any of the art he owns, Mr. Lauder said he would gladly return it. “Not only am I not trying to hide anything, it’s just the opposite,” he said. “It would be better for me if I had something stolen to give it back.”

“It’s something I desperately want to do.”