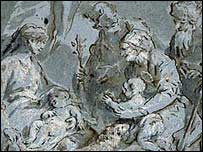 The British Museum wants to return the drawings

Four Old Master drawings looted by the Nazis could be returned to their original owner by the British Museum under proposed changes to legislation.

The Department for Culture, Media and Sport (DCMS) is reviewing the law to make such returns legal.

Consultations on the legislation - which will be limited to items taken between 1933 to 1945 - will begin soon.

The drawings, worth about £150,000, were stolen from Czech lawyer Arthur Feldmann, who was killed by the Nazis.

The museum wants to return the works to the Feldmann family, but in May the High Court ruled it would be breaking the law if it did so.

"Nazi looted art cases are unique moral claims for which restitution is the only just solution in the majority of cases", said Anne Webber, co-chair of the Commission for Looted Art in Europe

The court said "moral obligations" could not over-ride the British Museum Act, which protects the collection.

It is five years since the Culture Select Committee first called for a change in legislation and the DCMS said consultations would begin in the near future.

Any change in the law would be significant for all claimants of looted art from the Nazi era, including items already earmarked by the Spoliation Advisory Panel.

The panel was set up in 2000 to trace the ownership of art allegedly seized from Jewish owners before and during the Holocaust.

In a letter to the Jewish Chronicle on Thursday, Culture Minister David Lammy said: "In the very special and limited circumstances that apply because of the terrible things that happened during this era of our history, we should change the law. And we should do so as soon as we can.

"Broadly I believe that all our national museums and galleries should have a power to transfer items out of their collections where the item in question has been looted during the Nazi era."

He added that a "number of questions" had to be answered before legislation can be drawn up and Parliamentary time requested to enact it.

Anne Webber, co-chair of the Commission for Looted Art in Europe, said that while consultation was necessary, it was "essential" that legislation was enacted without "further delay".

"It is over 60 years since these wrongs were committed and any further delay would add to the pain of the families involved," she said.

"The Commission has been advocating this policy since 2000 at which time the government first stated its support for legislation. This is an extremely significant commitment which puts Britain back in the forefront of international policy on these issues."

The drawings in question are from the 16th to 18th Centuries. They are: