A Dispute Over a Klimt Purchased in New York

A grandson of a Viennese woman who died in the Holocaust contends that a Gustav Klimt painting in the private collection of Leonard A. Lauder, the New York cosmetics magnate, was looted during World War II, and is seeking restitution. 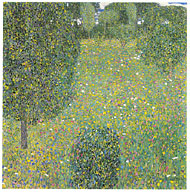 From “Gustav Klimt Landscapes” edited by Stephan Koja (Prestel)
In a dispute over “Blooming Meadow” (1906), a claimant’s lawyer says, “It’s the original owner who gets to keep the painting.”

The signed oil painting, “Blooming Meadow” (1906), was purchased by Mr. Lauder in 1983 from Serge Sabarsky, a longtime New York dealer in Austrian and German art. Mr. Sabarsky, together with Mr. Lauder’s brother, Ronald, was a founder of the Neue Galerie on Fifth Avenue, which opens a Klimt retrospective next month. (The painting is not in the show.)

Leonard Lauder said yesterday that the painting never belonged to the claimant’s grandmother and that the argument was without merit
.
The grandson, Georges Jorisch, has not made an official legal claim, said his lawyer, E. Randol Schoenberg of Los Angeles. But he is hoping that the parties can still arrive at a settlement.

“We will be making a demand if it doesn’t get resolved very soon,” Mr. Schoenberg said. “It would be unfortunate if it would have to come to that.”

In a telephone interview, Mr. Jorisch said he had not determined whether he wanted to get the painting back or to be compensated for it. “I don’t know yet,” he said.

The informal claim is reported in the forthcoming issue of The Art Newspaper.

The claim arises partly from the imminent publication of a new catalogue raisonné — or definitive listing of an artist’s complete works — by Alfred Weidinger, the associate director of the Albertina museum in Vienna. The book says the painting belonged to Mr. Jorisch’s grandmother Amalie Redlich and hung in her family’s villa in Purkersdorf, outside Vienna.

Mr. Schoenberg said that Ms. Redlich’s property was stolen after she was deported by the Nazis to the Lodz ghetto in Poland in 1941, after which there was no trace of her.

Ms. Redlich’s grandson, who is 79, says the painting was first acquired by his grandmother’s brother, Viktor Zuckerkandl, a Viennese steel magnate, collector and friend of Klimt, according to Mr. Schoenberg.

After Mr. Zuckerkandl died in 1926, the painting passed to Ms. Redlich, he said. (Ms. Redlich herself was the subject of one of Klimt’s last paintings, an oil on canvas that was unfinished when the artist died in 1918.)

“Do I have a picture of this on the wall of my client’s grandmother’s house in 1938? No,” Mr. Schoenberg said. “But every other piece of evidence points to this being the painting that was missing.”

“He really would like to have this painting back,” Mr. Schoenberg added. “It needs to be returned to him or purchased from him in some fair way.”

Even the listing for the planned Klimt show at Neue Galerie, which opens on Oct. 18, suggests that Ms. Redlich might have owned a “Flowering Meadow” from 1906.

But in a statement yesterday that he read over the telephone from Las Vegas, Leonard Lauder said: “We have conducted an exhaustive investigation over five years regarding the painting in question. It was never in Amalie Redlich’s collection as Mr. Jorisch claims. If Mr. Jorisch’s lawyer had provided us with evidence supporting the claim, we would have resolved this long ago.

“We have presented the findings of our research to Mr. Jorisch’s lawyer,” he added. “It’s difficult for me to understand why they have not made a formal claim but persist in these allegations.”

Mr. Lauder’s lawyer, Andrew Frackman, said his own research — which he has shared with Mr. Schoenberg — clearly contradicts the Jorisch assertions. “Research documents the six paintings that were in the Viktor Zuckerkandl estate in 1927 and 1928, which is the source of Amalie Redlich’s claim,” he said. “We’ve confirmed, based on the contemporaneous documents, that Leonard’s is not one of them. We don’t think there’s a claim here.”

Asked whether the new catalogue might influence the situation, Mr. Frackman said: “I doubt that it’s going to have any new information if it’s based on the same postwar material.”

According to the Weidinger catalogue, “Blooming Meadow” was sold after the war by a gallery in Vienna to a collector, Rudolf Leopold, who then sold it to Mr. Sabarsky. Mr. Sabarsky had no export permit for the painting, Mr. Schoenberg said.

Mr. Schoenberg said that according to a note in Mr. Sabarsky’s file, Ronald Lauder picked up the painting from Mr. Sabarsky for his brother. Mr. Sabarsky died in 1996.

The dispute suggests the tangled nature of restitution quests for paintings that were collected by wealthy European Jews between the two world wars. Last year Mr. Schoenberg won restitution from Austria of five Klimt paintings that belonged to the Viennese Bloch-Bauer family after an eight-year battle on behalf of a descendant, Maria Altmann of Los Angeles. These included the “golden” portrait of Adele Bloch-Bauer, which Ronald Lauder acquired last year for a reported $135 million for the Neue Galerie.

Mr. Schoenberg said he considered Leonard Lauder, too, to be a victim in this case because he doubtless paid a great deal of money for the painting from a dealer whom he knew well.

But “the American law is very clear,” he said. “It’s the original owner who gets to keep the painting. Stolen property remains stolen property, even if it’s purchased in good faith.”

Yet even while asserting that the catalogue raisonné offered conclusive proof for his claim, Mr. Schoenberg said that all he needed to do was prove that the Klimt more likely than not belonged to Ms. Redlich.

Even if there were only a “50 percent chance” that “Blooming Meadow” was taken from Ms. Redlich, Mr. Schoenberg added, “Does Leonard Lauder want to keep a painting that is 50 percent likely to have been looted from a woman who was murdered by the Nazis?”