Felix Ganz (1869-1944) was a successful businessman from Mainz and managing director of Ludwig Ganz AG, which imported and manufactured oriental carpets and textile products for furniture and home décor. Ludwig Ganz was based in Mainz, in Southwest Germany but with offices in Constantinople Smyrna and Tbilisi and shops in Wiesbaden and Berlin. Felix Ganz was also an art collector with an important collection of art objects from the Middle East and East Asia.

In 1934, Ludwig Ganz AG was ‘aryanized’. In 1938 and 39 his children fled Germany, two to the UK and one to Switzerland. Felix stayed in his palatial villa overlooking the Rhine. In 1942 he and his second wife Erna were deported to Theresienstadt, where they survived for two years, and were murdered in the Auschwitz concentration camp in October 1944.

His art collection disappeared with only have a rough description of the items from restitution claims. In 2019 some objects belonging to Felix were discovered in the Landesmuseum in Mainz. 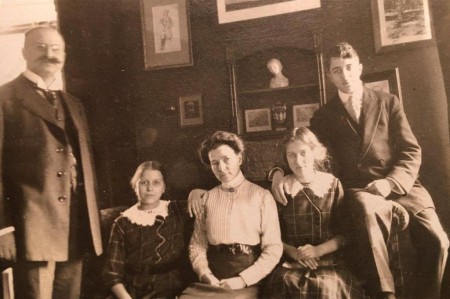 Photograph of Family Ganz: Felix Ganz (left) with his family in his home on the Michelsberg (Mainz) around 1914: his youngest daughter Olga, his wife Gertrud, his elder daughter Anne-Marie and his son Hermann. family archives © Ganz Family

In autumn 2018 he and Nathalie Neumann successfully applied to the German Lostart Foundation (DZK Magdeburg) to research the fate of the collection in conjunction with the University of Mainz.

The two researchers chose to combine their results and methods, placing Felix Ganz in the center of a network of family, friends, and business and administrative relationships in order to understand and reconstruct historic exchanges whether of information or objects. The aim of the research is to find the art collection of the Ganz family but one of the effects is also to reconstruct the memory and connections of this assimilated Jewish family in Mainz.

Adam Ganz, is Professor in the Department of Media Arts, Royal Holloway, University of London, and also active as professional screenwriter and director for radio film and television. His Radio 4 drama The Gestapo Minutes about Michel Oppenheimer, Head of the Jewish Community in Mainz was nominated for a BBC audio drama award.

Nathalie Neumann is a French-German art historian having studied and worked in Freiburg/ Breisgau, UMass Boston, EHESS Paris, Tokyo and Berlin. Master thesis on the representation of clouds in painting and photography, published as a CD-ROM (1996). Exhibitions and conferences held on documentary photography and the cultural transfer between Germany and France: Willy Ronis (exhibition in Paris 2010), Izis, Gisèle Freund (exhibition Berlin 2008) and Lore Krüger (exhibition Paris 2016). She has work experience at the Canadian and French Embassies in Berlin. For the last six years she did research and publications on the art collection of Julius Freund and aspects of restitution of looted art. From June 2016 to November 2017 she was a member of the Gurlitt Research Team, followed by a mission for the art collection of the Federal German government regarding art works from the CCP and remaining administrative archives. She is currently employed as researcher by the University of Mainz.

To see the talk on the Wiener Library website, go to https://wienerlibrary.co.uk/Whats-On?item=573