The first exhibition by a Munich museum on this subject, showing works from every part of its collections, both of known and as yet unknown provenance, profiling the owners and placing the acquisitions in the historical context of the Nazi persecution of the Jews. The exhibition invites visitors to bring in items that came into their families' possession during the Nazi era.

A key research priority for the Münchner Stadtmuseum (Munich Municipal History Museum) is to investigate the provenance of the works of art from its own collections. Our museum is the first in Munich to devote an entire exhibition to this topic. This will allow us to shine a light on our museum’s particular history during the Nazi era.

The exhibition offers a snapshot of our investigations to date. It traces the biographies of items from the Museum’s various collections, covering fields as varied as graphics and painting, fashion and textiles, artisan craftwork and furniture, musical instruments, and puppets. The sheer diversity of these collections is evidence indeed of the full extent of the Nazi plunder, which permeated every area of public and private life. 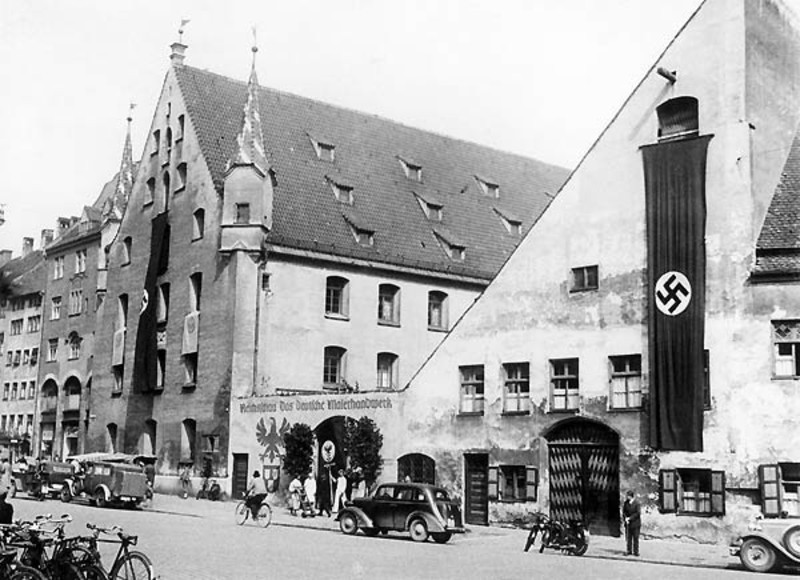 The Munich Municipal History Museum (now the Münchner Stadtmuseum) in 1936 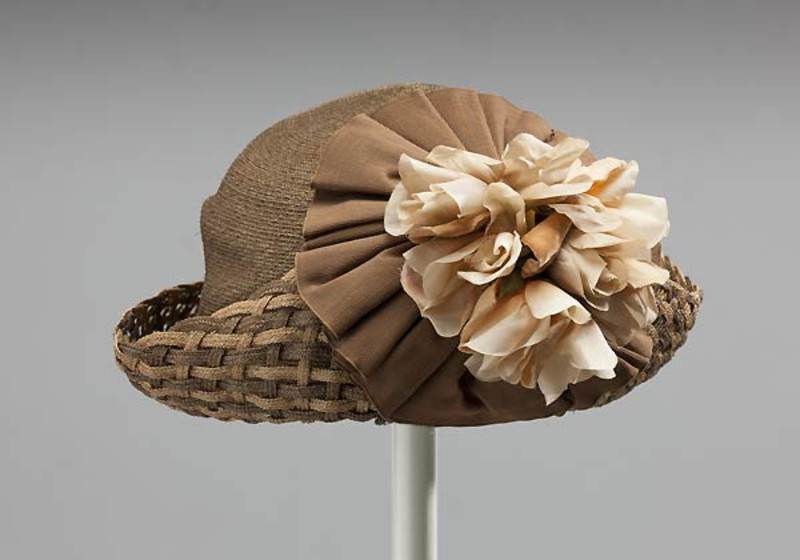 Ladies hat from the company archive of Heinrich Rothschild’s fashion and milliner’s store, straw with silk and velvet flowers, 1910 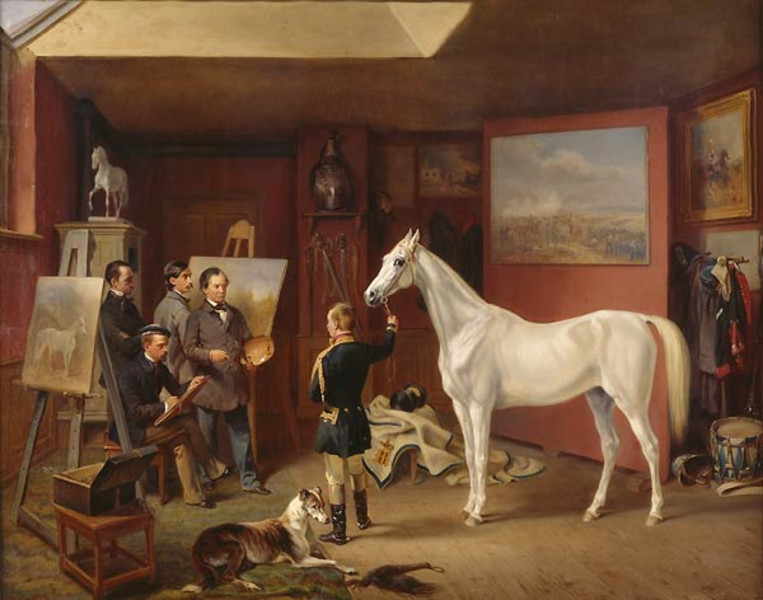 Albrecht Adam, 'In the Studio of the Painter Albrecht Adam', painting purchased from Hugo Helbing art dealership, oil on canvas, 1854 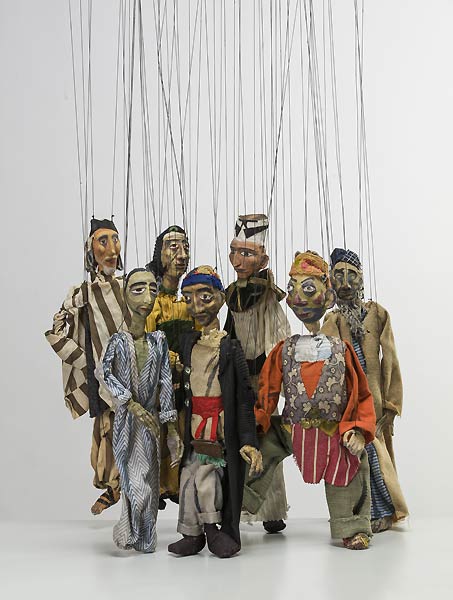 Under the Nazi regime, the Münchner Stadtmuseum acquired more than 20,000 works of art and cultural objects through donations, purchase or exchange. Approximately 2,600 of these objects require in-depth provenance research due to concerns about their precise origins. The provenance of some 450 artefacts has already been definitively established.

The exhibition focuses on a number of works of art, historical documents and photographs. It seeks to trace the Museum’s acquisition policy between 1933 and 1945 and examine the measures taken by its directors during this period. The scope of the exhibition moves well beyond the history of the Museum as an institution to paint a picture of how the art trade tended to operate under the Nazi dictatorship. It reveals a well-organized network of people who occupied influential positions in the municipal authorities, and a seamless collaboration between the different institutions involved in the Nazi regime’s systematic policy of persecution both in Munich and nationwide.

Until now, works of art by famous artists or belonging to prominent Jewish art dealers and collectors have dominated the headlines. We need only mention the recent “Schwabing Art Trove” discovered in Hildebrand Gurlitt’s collection. Such finds can cause us to overlook the less-well-known but often deeply personal works of art and cultural objects that also fell victim to the Nazi policies of persecution and expropriation. The repression and state-sponsored confiscation of property practiced by the Nazis also targeted Jewish artists who are all but forgotten today, as well as businesses, private individuals and political opponents of the regime. No account of the “Third Reich’s” history of disenfranchisement and expropriation can be complete until equal weight is given to the fate of the “little people” and to works of art and cultural objects deemed less important to art history.

The exhibition aims above all to tell the story of the art collectors and dealers, business proprietors and private individuals whose expropriated property directly benefited both the Münchner Stadtmuseum and other museums in Munich. We wish to celebrate their contribution to culture and tell their stories. We have chosen to shine a spotlight, for example, on Siegfried Lämmle’s art and antiques store, Heinrich Rothschild’s fashion store and milliner’s, collector and entrepreneur Dr. Julius Schülein, the L. Bernheimer company, centrist politician and industrialist Dr. Albert Hackelsberger’s collection and artist Maria Luiko.

For the very first time, the findings of provenance research into a museum’s acquisitions have been placed in historical context and presented in tandem with the story of the Nazis’ repression of the Jews. The progressive escalation of the Nazi regime’s anti-Semitic policy of marginalization and persecution is illustrated by carefully chosen acquisitions from the period between 1933 and 1945. It reveals the State’s meticulously planned “Aryanization” of Munich businesses and seizure of Jewish property. Four distinct stages emerge, tracing a line from the economic exclusion of the Jews to the destruction of their livelihoods. These stages offer the exhibition a common thread and lay bare Munich’s leading role in the Nazis’ persecution of the Jews and their exclusion from economic life.

A substantial part of the exhibition also covers the post-war years. This section focuses on those Nazis who remained in post after the war and on the handling of works of art that were expropriated by the Nazi regime and removed from the Museum as well as new post-1945 acquisitions. For instance, it examines the “federal government loans” made from the remaining “Central Collecting Point” holdings.

This exhibition delves deeply into the provenance research carried out by the Museum to date. It does not shy away from the Münchner Stadtmuseum’s responsibility for its past actions and, for the first time, reveals to the public an important chapter of the Museum’s history. The exhibition also aims to address the topic of provenance research for the general public and raise awareness of its importance.

Visitors to the exhibition are invited to bring in works of art and cultural objects that came into their families’ possession during the Nazi era. An expert will be on hand to examine these items and discuss the family stories that surround them. We are interested in items that formerly belonged to Jewish neighbors, friends and acquaintances or people persecuted for their political views, as well as any items that you suspect may previously have had Jewish owners.

For its 2008 exhibition “Looting and Restitution”, the Jewish Museum Berlin developed a computer game called “What would you do?”. The cartoon-style game centers around a fictitious painting. The characters include a cultural policymaker, an art collector, the heir of the painting's original owner, and the director of the museum in which the painting is currently on display. All four characters must decide what to do when they learn of the painting's previous history. We would like to thank the Jewish Museum Berlin for allowing us to use the computer game on the media stations in our exhibition.

Click here to play “What would you do?” online.

For details about how to visit the museum, opening hours, etc, click here