The role played by Alfred Flechtheim (1878–1937) in the history of twentieth-century European art cannot be underestimated. He dealt in his galleries with the most important artworks of his time and was a charismatic driving force for artists, museums and collectors. His publication “Querschnitt” was one of the Weimar Republic’s most intellectually stimulating avant-garde magazines. Flechtheim was surrounded by such popular celebrities as Max Schmeling and illustrious artists like Renée Sintenis. Defamed by anti-Semitic hostilities and threatened by the Nazis, he emigrated from Germany in 1933 and died in exile in 1937.

In this first special exhibition on Alfred Flechtheim to be shown in Berlin, special attention is be paid to his pronounced love of modern sculpture from the nineteen twenties. While his dedicated commitment to painting, for example by Vincent van Gogh, Pablo Picasso, George Grosz and Max Beckmann, has been acknowledged, modern sculpture played an equally important role in his exhibitions, an crucial aspect that has been neglected in previous assessments of his work. The exhibition “Alfred Flechtheim. Modernism’s Art Dealer” at the Georg Kolbe Museum documents the stylistic as well as biographical contrasts between sculptors represented by Flechtheim, ranging from Arno Breker, who rose to the rank of state artist in the National Socialist system, to Moissey Kogan, who was murdered in Auschwitz. 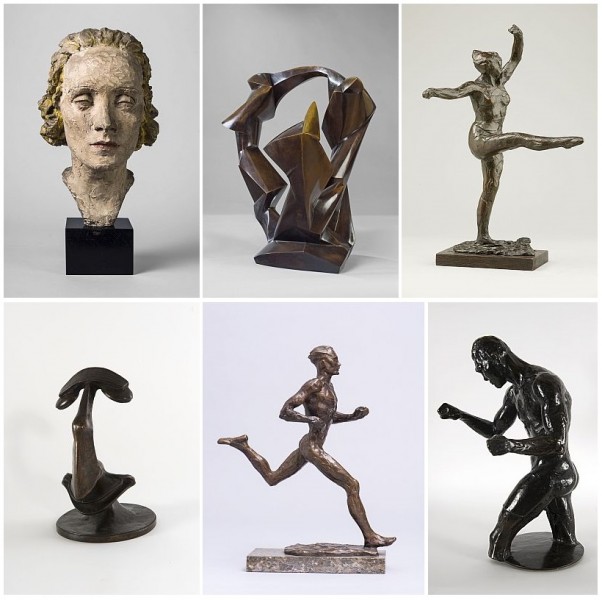 In 1921, the passionate art collector transferred his gallery’s headquarters from Düsseldorf to Berlin. His most successful period was the nineteen twenties, selling numerous works to collections at home and abroad. For many of “his” artists, the collaboration with the Galerie Flechtheim marked the zenith of their artistic careers. Renée Sintenis, famed for her Berlin Bears, and her sculptor colleague Ernesto de Fiori, who portrayed both Marlene Dietrich and Max Schmeling, were among Flechtheim’s closest associates and omnipresent in pages of “Querschnitt.” These artist personalities were well suited to Flechtheim’s staged self-image, radiating self-confident international cosmopolitanism.

At that time, established sculptors such as Georg Kolbe and Ernst Barlach could already look back at many successful years with the art dealer Paul Cassirer, who was one of Flechtheim’s early mentors. After Cassirer’s death in January 1926, Flechtheim assumed in numerous ways his role as the charismatic networker of Berlin’s art scene.

Representatives of the art world, politics and society came together at the Galerie Flechtheim’s legendary parties and festivities to celebrate the new-found freedom of the Weimar Republic. Alfred Flechtheim not only manifestly marketed works of art but also represented a cultural zeitgeist that sought the innovative on numerous levels. For him, art was more than a mere business; it was a passion that he discovered early in life as a collector and which he consistently promoted as a dealer. Many extraordinary works found their way into the collections of German museums through his intervention. The exhibition features two of the seven figures of dancers by Edgar Degas (from the Kunsthalle Bremen and the Städel in Frankfurt) that Flechtheim sold to diverse German museums.

The underpinning of Alfred Flechtheim’s work as a dealer was taken from him by the Nazis; many of his artists were deemed “degenerate”. In the fall of 1933, he emigrated to London by way of Paris:

“Yesterday I left Berlin forever. My galleries there and in Düsseldorf are to be closed. There is no place for me here. […] If I had not dealt with Hofer, Kolbe, Renée [Sintenes], Klee and with my French artists they would not have bothered with me; yes, they even gave me to understand that if I did without these artists I could carry on quite happily as an art dealer!!! But I would prefer to be really poor abroad than a traitor.” (Alfred Flechtheim, 1933)

In 1937, Alfred Flechtheim died in exile in London. Rediscovered comparatively late, he has again attracted much public notice in conjunction with the important debates on the restitution of unlawfully confiscated cultural properties. The exhibition at the Georg Kolbe Museum aims at focusing attention on his influential activities and documenting this special chapter in Berlin’s modern history. Flechtheim was doubtlessly one of the most important and vibrant protagonists of art in the Weimar Republic. On March 11, 1937, his obituary was published in the “Pariser Tageszeitung” (an exile newspaper) in which the art critic Paul Westheim wrote:

“Alfred Flechtheim was more than an art dealer; on life’s stage, which we had the honor to see, he was a man who was always in the foreground, a person known to the whole world and about whom the whole world talked.[…] He enjoyed it when the serious people kept on thinking he was mad. That is precisely what made him so authentic, it was this passion for artists, for artistic people, for paintings.”

The Georg Kolbe Museum – A Jewel in the Berlin Museum Landscape 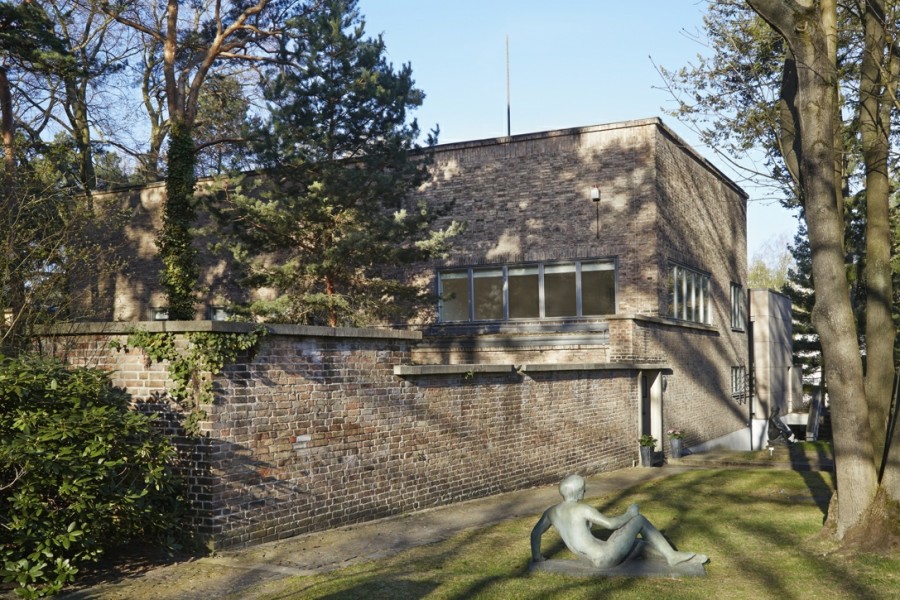 Georg Kolbe (1877–1947) was the most successful German sculptor of the first half of the twentieth century. His expressive sculptures dating from the nineteen teens and twenties reflect the spirit of the times in the European art metropolis Berlin, conveying a vivid image of the era they were produced in. Their close ties to now iconic examples of modern architecture is particularly enlightening for an understanding of their historical significance.

Mies van der Rohe placed Kolbe’s sculpture
“Morning” in the reflecting pool
of his Barcelona Pavilion
built on the occasion of the 1929 World Exposition.

Mies van der Rohe, for example, placed Kolbe’s sculpture “Morning,” a female nude with arms outstretched upwards, in the reflecting pool of his Barcelona Pavilion built on the occasion of the 1929 World Exposition. The museum’s building was erected as Georg Kolbe’s home and studio on the outskirts of the Grunewald forest in 1928/29. It is an architectonic jewel amidst a green setting. Berlin’s sole sculpture museum is dedicated to questions regarding classical and contemporary sculpture as seen from a present-day perspective. 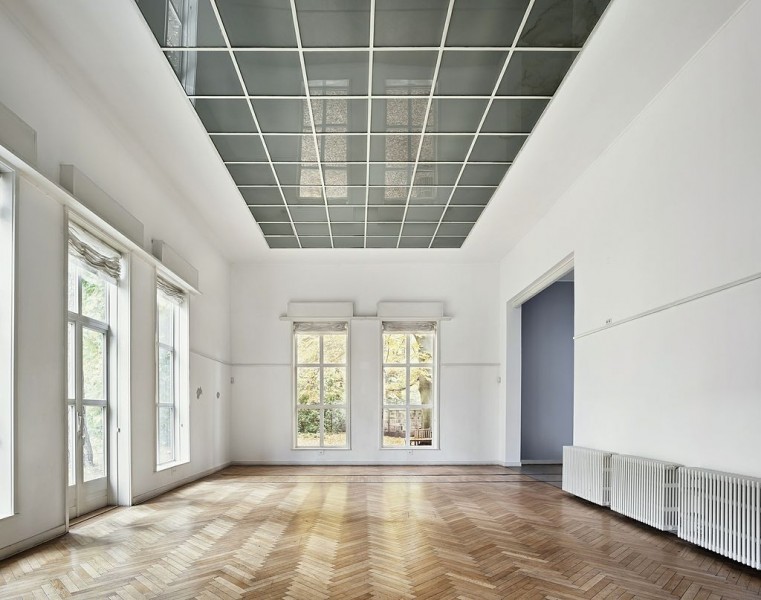 Georg Kolbe and his Times
Georg Kolbe, who trained as a painter and draughtsman, became famous overnight for his sculpture “Dancer” that captures a girl in a self-engrossed twisting motion with arms outstretched to the sides. The delicate bronze figure was exhibited for the first time in 1912 at the Berlin Secession and acquired that same year for the Nationalgalerie. Particularly the younger audience in late Imperial Germany was passionate about the sculpture that came to symbolize modern human beings dancing themselves free of the shackles of the Wilhelminian Period’s incrusted traditions. Kolbe became a representative of a new era with this figure. Especially during the Weimar Republic, the sculptor received a large number of official commissions and honors. A bust he made of the Germany’s Social Democratic president Friedrich Ebert in 1925 triggered an extensive public discussion that was not only ignited by the work’s aesthetic qualities but also its political message. This sculptural dispute exemplifies the enormous social upheavals of these years that were accompanied by an aesthetic debate.

Especially during the Weimar Republic,
the sculptor received a large
number of official commissions and honors.

Like most classical modern sculptors, Kolbe favored the nude as the theme of his works. His concentrated and idealized depictions of the human being are far removed from the detailed realism and mawkish eroticism typical of the nineteenth-century Prussian-Wilhelminian tradition.

Dancing Girl Fountain in the Garden

The Sensburg – Georg Kolbe’s Studio and Home
The two buildings making up the site were erected in 1928/29 according to Georg Kolbe’s own specifications by the Swiss architect Ernst Rentsch. The brick structures with ceiling-high windows are a clear affirmation of architectural modernism. The artist chose a refuge on the outskirts of the city for his new home and workplace, not far from the Heerstraße Cemetery, where his wife Benjamine was buried after her death under tragic circumstances in 1927.

The two houses are connected by a park-like garden with old pine trees. The artist himself lived and worked in the present-day museum building. The ensemble also includes the stylistically similar home belonging to his daughter, where museum workspaces and Café K are now located.

The brick structures
with ceiling-high
windows are a clear
affirmation of architectural modernism.

Very few sculptors’ studios from the late nineteenth and early twentieth century have survived in Berlin, and only Georg Kolbe’s studio is open to the public. Three years after his death in 1947, it became the first museum to be opened in the Western Sector of the city. It has been preserved in its original state; only the former clay studio gave way in 1995 to a spacious extension that more than doubled the size of the museum’s exhibition space to circa 400 square meters and created storage space for the collection.

The Museum and its Collection
The museum is dedicated to researching, preserving and probing Georg Kolbe’s artistic legacy. Not including the plaster models, it encompasses over 200 of his works, particularly bronzes, among them many unique examples. It furthermore houses an important collection of classical modern sculpture, for example by the sculptor friends Renée Sintenis, Richard Scheibe and Gerhard Marcks in addition to numerous extensive artist estates.

A lively dialogue is initiated in exhibitions on Georg Kolbe and his times as well as on art of the present day that examine historical and current questions from a scholarly and critical perspective. One focus of the museum’s activities is reanimating the museum as a site where art is produced. At the start of the twenty first century, a museum devoted to sculpture faces questions regarding what constitutes sculpture today. This also involves a reexamination of the genre’s boundaries and its place within a contemporary spectrum. 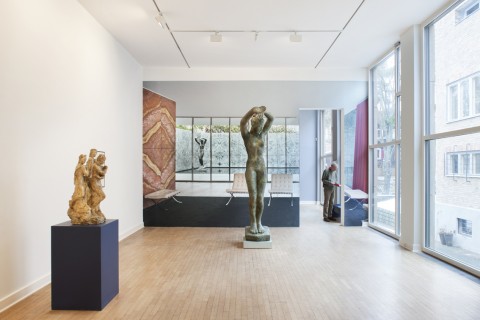 The Georg Kolbe Grove and the Museum’s Surroundings
The site is not only captivating due to its enchanting grounds, but the museum is also located within walking distance from the Georg Kolbe Grove, a park featuring several large-scale sculptures by the artist. Berlin’s most scenic cemetery is also situated in the immediate vicinity, the Heerstraße Cemetery, where Georg Kolbe is buried alongside his wife and grandson.

There are furthermore a number of important architectural landmarks in the neighborhood, including famous New Objectivity villas, the Le Corbusier House, Olympic Stadium and Broadcasting House.